‘They Treat Me Like a Piece of S—’: Raphael Warnock’s Church Pays for His Home. It’s Also Trying To Evict the Poor From Theirs.

Ebenezer Baptist Church owns an apartment building where residents are being served eviction notices for $28.55 in past-due rent

ATLANTA—"Unemployment benefits have expired, rent is due today, and many Georgia families are at risk of eviction in the middle of a pandemic," Sen. Raphael Warnock (D., Ga.) wrote in a tweet in August 2020, charging that by failing to act, his political opponents were "clearly only concerned with serving their own interests."

It may be good political rhetoric, but Warnock’s Ebenezer Baptist Church, where the senator serves as senior pastor—drawing a salary as well as a generous $7,417 monthly housing allowance—has moved to evict disadvantaged residents from an apartment building it owns, one of whom it tried to push out on account of merely $28.55 in past-due rent.

The church is the 99 percent owner of the Columbia Tower at MLK Village in downtown Atlanta, according to documents obtained by the Washington Free Beacon, which describe the building as a home for the "chronically homeless" and those with "mental disabilities."

A dozen eviction lawsuits were filed against Columbia Tower residents over the course of the coronavirus pandemic, the first one in February 2020 and, most recently, in September 2022. The total sum of past-due rent cited in the lawsuits is just $4,900, a figure that could have been covered by one of Warnock’s monthly housing stipends from the church.

The lawsuits were filed by Ebenezer Baptist Church’s business partner, Columbia Residential, the 1 percent owner of the building, which manages its day-to-day operations. The revelations threaten to undermine Warnock’s efforts to cast himself as an ally of struggling Georgians working to meet rent in the face of pandemic-era challenges. 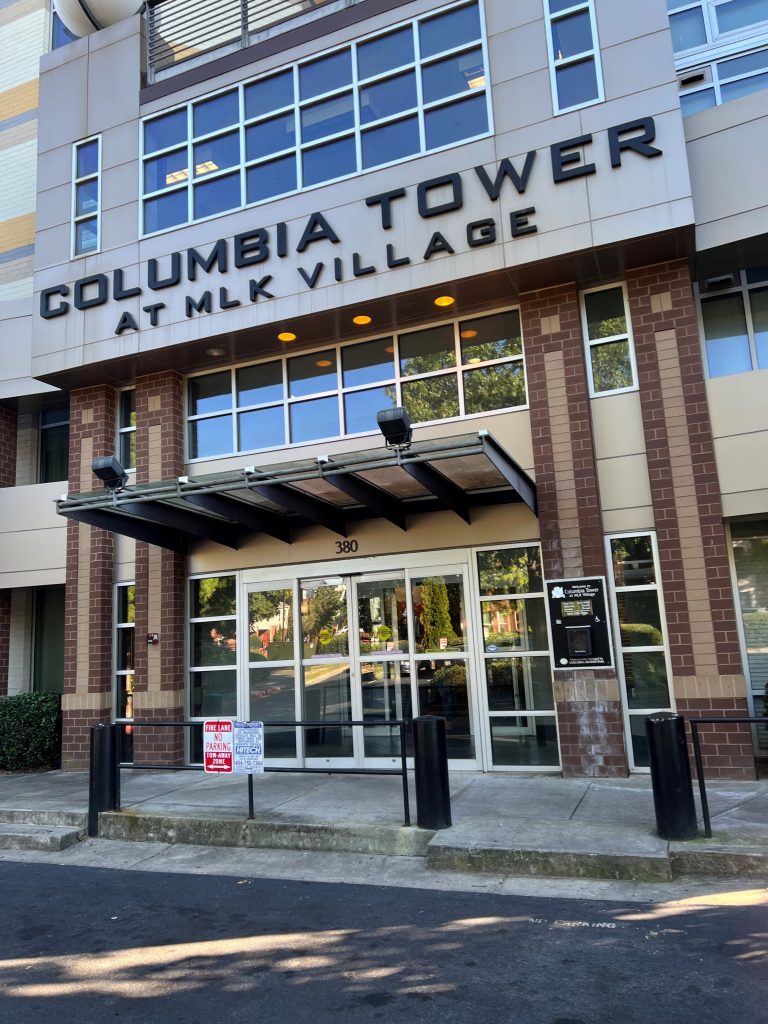 Ebenezer is not hard-up for cash—audited financial statements obtained by the Free Beacon show that Ebenezer closed out 2021 with cash and "cash equivalents" exceeding $1.2 million—and it is unclear why Columbia Residential moved so aggressively to evict its tenants.

Columbia Tower residents, who told the Free Beacon they were unaware that Ebenezer Baptist Church owns their building, described living under the rule of landlords who don’t hesitate to go to court to evict them and their neighbors, even if they’re just a few days short on rent.

"They treat me like a piece of shit. They're not compassionate at all," said Columbia Tower resident Phillip White, a 69-year-old African American who says he served in Vietnam and received an eviction notice on Sept. 20 for failure to meet a $192 rent payment. It was Columbia Tower’s second attempt to evict White, who received his first eviction notice in September 2021 for $179 in past-due rent. That case was dropped after White paid up, plus an additional $325 in fees, he told the Free Beacon. 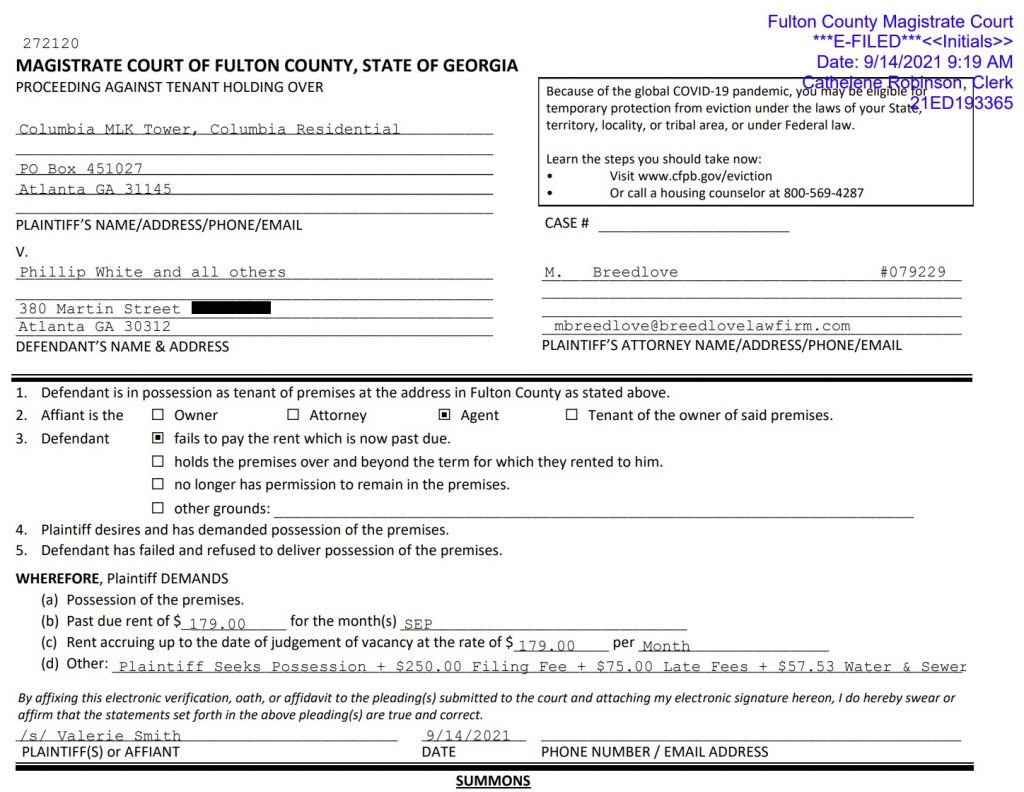 The eight Columbia Tower residents who have been served dispossessory notices since early 2020 owed, on average, just $125 a month in rent, and five lawsuits sought rent less than one month late. Two resulted in court-ordered evictions carried out by the Fulton County Marshal’s Department. Six other eviction lawsuits were either voluntarily dismissed by the building administration or closed out by a judge for inactivity. Four others, including White’s, were filed in late September and remain open.

Beyond the building partnership, there are ties between Warnock and Columbia Residential, the property manager of the building. Columbia Residential founder and CEO Noel Khalil, who led the company until his death in October 2021, donated $14,000 to Warnock’s 2020 Senate campaign and runoff, according to Federal Election Commission records.

Months after Columbia Residential filed its first pandemic eviction lawsuit in February 2020, Warnock charged in December of that year that his Senate opponent, Kelly Loeffler (R., Ga.), was failing to protect Georgia families because she did not support COVID-19 eviction moratoriums.

Pandemic unemployment benefits and eviction protections will expire this month.

And it's all because @Kloeffler and Senate Republicans refuse to fight for families.

Pandemic relief is at stake in the #GASen race. #GASenDebate #VoteWarnock

It is unclear whether Warnock was aware of the actions of Ebenezer's business partners and the evictions they were overseeing as he was railing against such actions, and he did not respond to a request for comment. But on Aug. 17, 2020, the Fulton County Marshal’s Department executed a court-ordered writ of possession against a Columbia Tower resident who was sued in February 2020 for $28.55 in past-due rent. Court records show the resident had already vacated the apartment when the order was carried out. Had she been present, the authorities would have forcibly ejected her from the building. 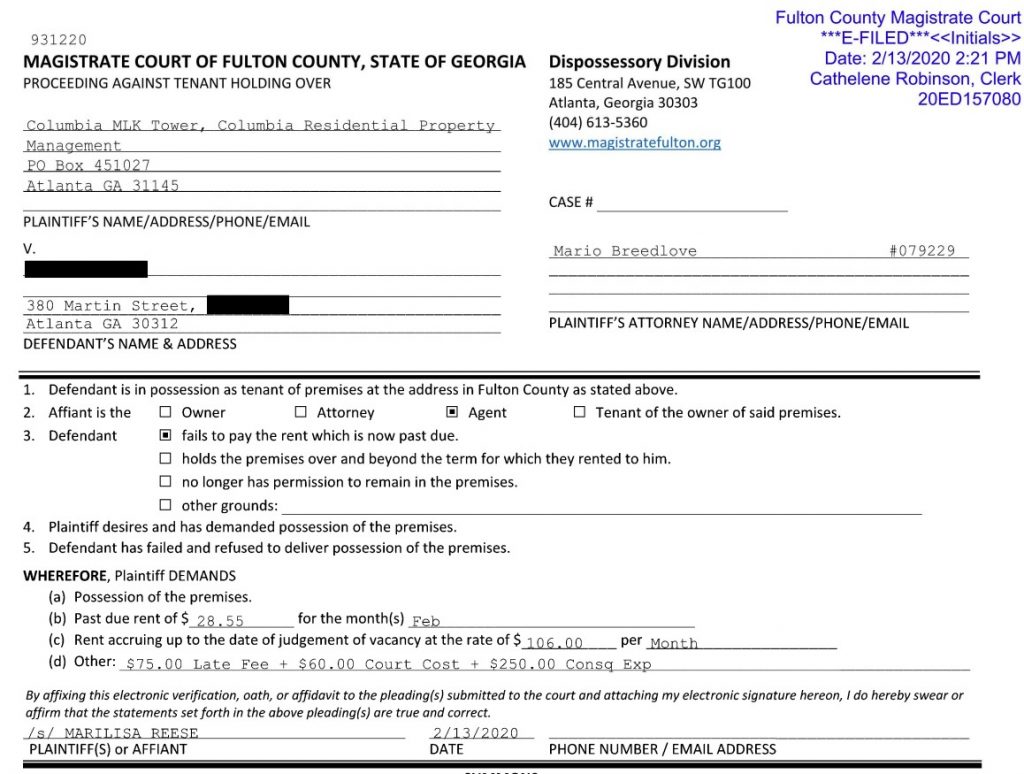 Eviction lawsuit against Columbia Tower tenant for past due rent of $28.55

Warnock, Columbia Residential, Ebenezer Baptist Church, and the attorney who filed the eviction lawsuits, Mario Breedlove, did not respond to requests for comment.

White, the Marine veteran, said he plans to go to court to challenge the latest effort to toss him out, adding that he will have to do so without the help of a lawyer because he can’t afford legal representation. He doesn’t even own a phone.

Columbia Tower depicts itself as a landing spot for those who have fallen on hard times—a mural on the side of the building reads "Safe Haven."  The building has benefited from over $15 million in federal and state funding to shelter the chronically homeless since 2005. 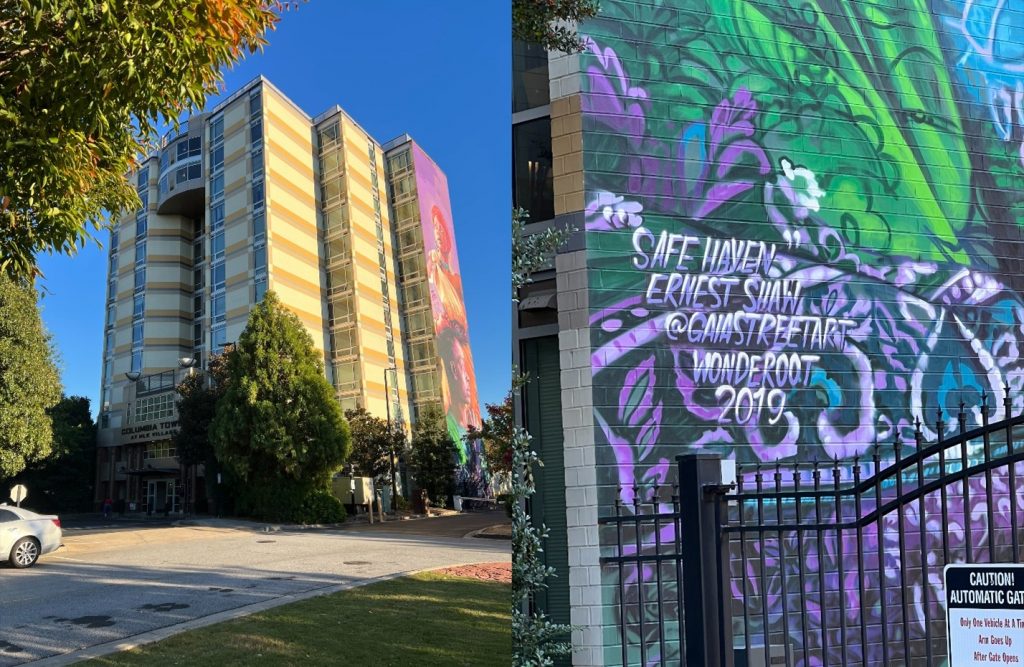 Because Ebenezer is a charitable operation, almost no property taxes are paid on the building: While the property has a market value of $1.72 million, Ebenezer and Columbia Residential have paid just $77.77 in property tax over the past seven years, according to Fulton County tax records.

The building also received $1.5 million in federal and state low-income housing credits in 2005, as well as a $2 million grant in 2007 from the Atlanta Development Authority to rehabilitate 39 of the 96 units in the building. That’s in addition to $6.6 million in HomeFlex rental assistance since 2015. HomeFlex is an Atlanta program designed to secure affordable housing units for low-income families in the city.

One of the eight Columbia Tower residents who faced eviction during the pandemic said she was unaware that Ebenezer owned the building, or that her home has received more than $15 million in taxpayer-funded assistance since 2005. "It’s disheartening. It’s horrible. It’s actually horrifying," the resident told the Free Beacon. "We need the help. I understand churches take care of their pastors, but the excess, it’s not good. Not when you have people that need help here."

The resident, who asked not to be identified, citing a fear of retaliation, said she was served an eviction lawsuit after submitting her rent just a day late. "I put in the wrong card number. The money was in the bank but it didn’t go through. The next day I rectified the situation, but they still served papers," the resident said, adding that she ultimately paid more than $300 in court fees—a figure equivalent to about two months of rent—to make the situation go away.

"It was devastating and surprising. I know they have the ability to be patient with me and let me pay my rent. And it was paid," the resident said. "I asked for patience, but I was totally ignored."

In public documents, the connection between Ebenezer Baptist Church and Columbia Tower is somewhat difficult to trace. The church owns the building through a network of shell organizations connected to the Ebenezer Building Foundation, a 501(c)(3) charity that delegates all management duties to the church and identifies Warnock as its principal officer in its IRS Form 990 filings.

The church identified Ebenezer Building Foundation as the 99 percent owner of Columbia Tower in June 2022 when it requested $5 million from Georgia to renovate the building, according to a copy of the grant application obtained by the Free Beacon.

"The Ebenezer Building Foundation, Inc. an eligible 501 (c)3) corporation is requesting a grant in the amount of $5,000,000 for the rehabilitation of Columbia Tower at MLK Village," Ebenezer wrote in the grant application. "The property includes 96 affordable units that have served the chronically homeless with mental disabilities since 2007. Ebenezer is the 99% owner of the General Partner in this property. The rehabilitation will be performed in collaboration with Columbia Residential, the 1% owner of the General Partner."

The Ebenezer Building Foundation, however, has never disclosed its ownership of the MLK Village Corporation in its IRS Form 990s. Tax experts say the charity should be reporting its relationship with the shell company to the IRS because they’re run by the same people.

"The Ebenezer Building Foundation appears to be hiding from the IRS its relationship with the MLK Village Corporation because of the common officers between the two entities as well as with Columbia Residential because of the Foundation's 99 percent interest in the general partnership with Columbia who owns the remaining one percent," said Paul Kamenar, an attorney with the National Legal and Policy Center, a watchdog group.

MLK Village Corporation is listed as one of the two general partners of MLK Village Tower L.P., which, according to Fulton County real estate records, is the entity that formally owns Columbia Tower. A shell company owned by Columbia Residential, which manages the day-to-day operations at the apartment building and is the entity listed as the plaintiff in its eviction lawsuits, is the church’s 1 percent partner in Columbia Tower. 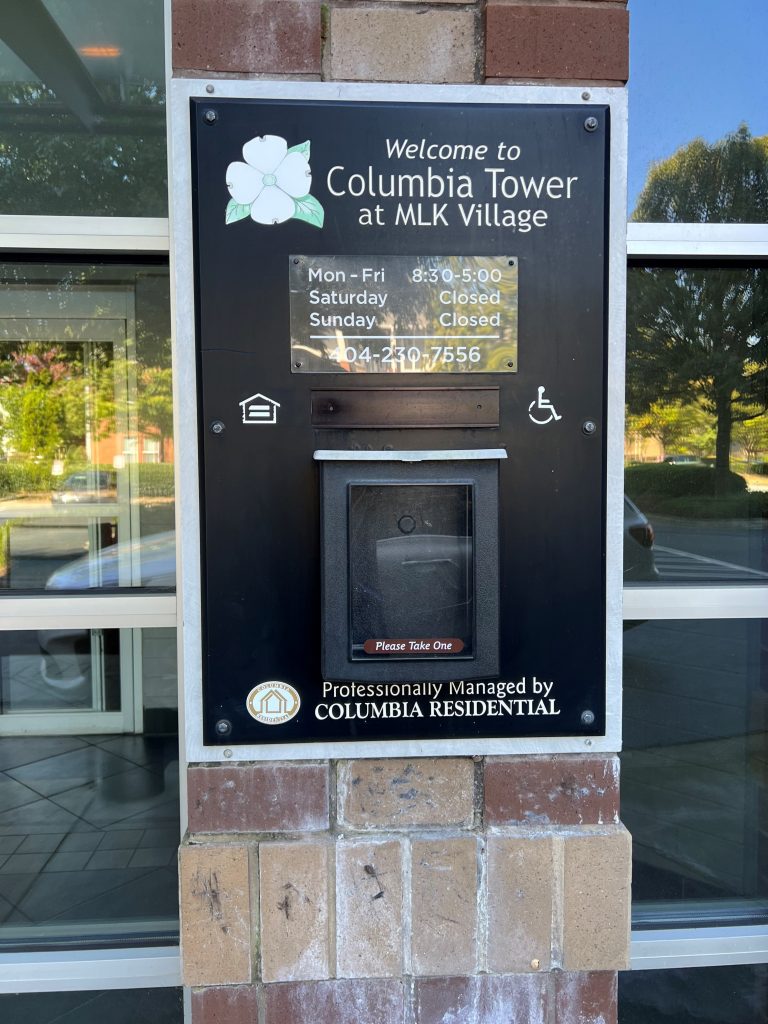 Warnock is in the midst of one of the country’s most closely watched Senate races, facing off against Republican nominee Herschel Walker. The race could determine control of the Senate in 2023.