The newest employee for the Democratic Congressional Campaign Committee is a former gang member who remains on parole in New York, according to state records.

Dyjuan Tatro, a former "triggerman" for an upstate New York gang, started this week as the campaign committee's senior adviser for diversity and inclusion. Tatro, who earned a bachelor's degree while behind bars, was released from federal prison in October 2017—but he is on parole in New York for drug and assault convictions that preceded his federal convictions, according to a database by the state's Department of Corrections and Community Supervision.

Tatro was already in jail for the New York crimes in 2009 when a multi-agency federal RICO taskforce brought down Tatro’s gang, the Original Gangsta Killas. Court records indicate the scale of his criminal enterprise is much wider than previously reported.

In a December 2010 plea agreement, Tatro admitted to attempted murder, assault, running guns for fellow gang members from out-of-state sources, and distributing crack. The quantity of crack the Killas distributed was so large that Tatro was eligible for a life sentence, according to court records. A 2009 sentencing memo further reveals that Tatro remained in touch with members of the gang while he was incarcerated, raising questions as to when his gang association ended.

The DCCC did not respond to inquiries regarding Tatro's parole status and whether he will receive paid time off to meet with his parole officer.

While the exact terms of Tatro's parole agreement are unknown, New York parole guidelines provide that parolees shall not leave the state without permission from their parole officers. The guidelines also allow parole officers to conduct unaccounted spot checks at their place of employment. State documents also indicate that parolees with known gang affiliations such as Tatro are put in a "high-risk" category with further travel restrictions.

The DCCC defended its decision to hire Tatro after initial reports on his prior gang affiliation and support for the movement to defund the police.

"He has served his time for the crimes he committed and is now a national leader in the bipartisan movement to reform our criminal justice system and bring meaningful improvements to the education system in American prisons," a spokesman told the New York Post.

Tatro has drawn criticism for his extreme attacks on law enforcement in the past year. He has compared cops in the United States to Nazis and the Ku Klux Klan. Tatro has lashed out at Starbucks for asking employees to serve cops, calling it an effort to "indoctrinate employees with pro-police nonsense."

In a now-deleted post following the Jan. 6 riot in Washington, D.C., Tatro attacked efforts to support the U.S. Capitol Police because he said they were "white supremacists."

I don't understand why you can't CONDEMN VIOLENT POLICE & acknowledge LOOTING as a VITAL form of social PROTEST.

And, how about YOU not use sterilized language when referring to state sanctioned murder while maligning protests against the systemic racism that enables it. 1/2 https://t.co/soWSsgPiEH

A review of Tatro's social media accounts also indicates he has traveled to Mexico in recent weeks, an apparent violation of his parole. A Feb. 8 picture posted by Tatro on Facebook shows him on the beach in Cabo San Lucas, Mexico. It is unclear when the trip occurred. 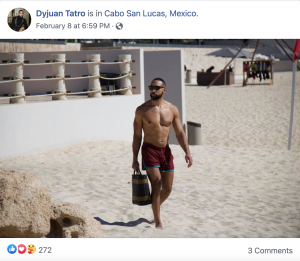 New York records show Tatro's parole is based on convictions for drug possession and second-degree assault, both felonies.

Tatro's hiring comes as some Democrats try to distance themselves from calls to defund the police, which proved to be disastrous for Democrats at the ballot box last November. In party meetings after the elections, Democrats in swing-districts complained that the embrace of anti-police protests gave their opponents unlimited ammunition.

Rep. Sean Patrick Maloney (D., N.Y.), the DCCC's new chairman, pitched himself to colleagues as a moderate who could compete in districts won by Trump that Democrats will need to win to maintain their narrow majority.

Maloney did not return a request for comment on Tatro.

McAuliffe Ally: Defund the Police and Pay for Abortions