A conservative nonprofit has refused Senator Sheldon Whitehouse's (D., R.I.) demand that it release the names of its top funders, citing concerns that the senator is not "operating in good faith."

Whitehouse requested that Capital Research Center president Scott Walter disclose the group's donors on March 12. In a letter sent Thursday and reviewed by the Washington Free Beacon, Walter denies the request, writing that he and his organization "oppose government-coerced disclosure of donors."

This is Whitehouse's latest attempt to get right-leaning "dark money" groups to disclose their primary funders. The senator also sent letters requesting that the Federalist Society and Judicial Crisis Network disclose their donors. Whitehouse has relied on groups that conceal his donors throughout his time in the Senate.

Two days before Whitehouse wrote to the Capital Research Center, Walter participated in the senator's hearing on "Dark Money and the Judiciary." Throughout the hearing, Republican senators criticized Whitehouse's witnesses, three left-wing dark money critics who all receive cash from anonymous donors.

During the hearing, Ben Jealous, president of the liberal group People for the American Way, pledged to disclose his group's top five donors. Whitehouse referenced Jealous's statement in his letter to Walter, asking the Capital Research Center to reveal its top five donors "in the spirit of equivalence."

Writing to Whitehouse, Walter defended his decision to protect donor privacy. "The practical reason for opposing donor disclosure arises from very real threats, felt across the political spectrum, of mob harassment or worse," the letter states. "And Mr. Chairman, just as your side has more groups, active for more years and possessed of far more ‘dark money,' so does your side have more mobs."

Whitehouse has made donor disclosure a cornerstone of his agenda. The senator claims that Republican dark money groups operate a vast network that grooms candidates for judicial appointments and pushes the courts to rule in favor of corporate interests.

For years, Whitehouse and other Senate Democrats have attempted to coerce groups like the Judicial Crisis Network into releasing lists of their donors. In 2019, a group of Democratic senators, including Whitehouse and Senate majority leader Chuck Schumer (D., N.Y.), pressured the network to disclose its donors after it launched campaigns defending Supreme Court justices Brett Kavanaugh and Neil Gorsuch.

Democrats rely on similar groups to shape the courts. Demand Justice, which seeks to promote left-wing causes and elevate progressive judges, is part a massive dark money network managed by Arabella Advisors. Liberals have expanded such coalitions since President Joe Biden took office in an effort to influence his judicial nominees.

Whitehouse's office did not respond to a request for comment on his demand for Republican groups to turn over their donors.

Update: An earlier version of this report stated that People for the American Way has not released a list of their top donors. The group has released the list. 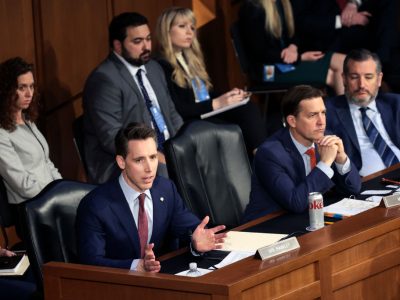