It was as streamlined as a coffeemaker. As compact as an electric shaver. As modular as a set of Lego blocks. As impossible as a dream. The Monsanto House of the Future may have been the most comically over-rationalized construction ever allowed to escape an architect’s sketchbook and actually get itself built. But there was nonetheless a kind of weird joyousness about the absurd thing, which stood as the centerpiece of Disney’s Tomorrowland from 1957 to 1967.

Still, as we look back, the arrogance of all that Tomorrowland futurism seems bearable, even admirable, in ways that the dystopias of later futurisms do not. The Monsanto House of the Future was so wonderfully naive and hopeful. Who complains when children boast of their rock constructions in the garden? Who breaks a butterfly upon a wheel? The California sun was always shining on America at Disneyland, and the future promised always to be bright.

The Monsanto House of the Future is featured on the cover of The Tale of Tomorrow: Utopian Architecture in the Modernist Realm, a new coffee table book of architectural illustrations edited by Sofia Borges, Sven Ehmann, and Robert Klanten. And why not? The fiberglass building—a joint project of the Monsanto Company, MIT, and Disney—remains the archetype of the editors’ thesis about the role of architecture in delivering modernity to the world.

Unfortunately, the Monsanto House of the Future also proves how short-lived that Tomorrowland moment was—a point less stressed and less admitted by the editors of the book. As the endless parade of pictures in The Tale of Tomorrow proves, that kind of modernism was barely a flicker, barely a flash, in the history of architecture. It was already fading by the time Disney tore down the house in 1967, and joyous futurism gave way to darker things.

It’s too polished a talking point to propose Tomorrowland as a symbol for a time that never actually came around, too worn a cliché to note that the future isn’t what it used to be. But hackneyed thoughts are not necessarily false. In truth, the future really isn’t what it used to be, and the joy of Tomorrowland drained out of architecture through the 1970s, never to return. The streamlined curves descended to the designs of fast-food restaurants. The compact modules became the basis of the doublewides in trailer parks. And over-rationalism decayed into the anti-rationalism of postmodernist aesthetics. 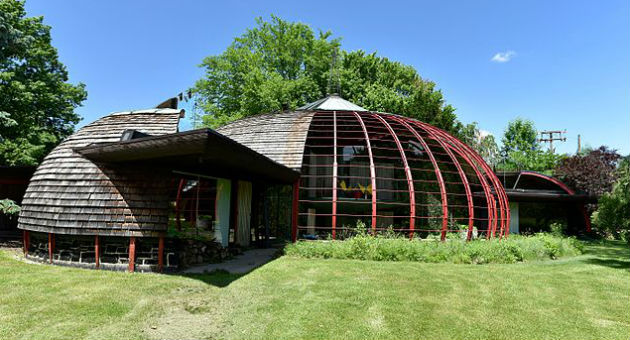 Make no mistake: The Tale of Tomorrow is a beautiful book, and it offers innumerable pictures of beautiful buildings. Well, no, not the Ruth Ford House, Bruce Goff’s 1948 atrocity in Aurora, Illinois, featured on pages 60-61 of the book. (The house attracted so much negative comment that the Fords put up a sign reading "We don’t like your house either" at the entrance to the property). And not the brick fallout-survival bunker of Herb Greene’s 1962 Cunningham Residence. And not the shipyard freight-conveyer of Lina Bo Bardi’s 1968 São Paulo Museum. And not Robert Roloff’s 1964 State Capitol Bank in Oklahoma City—a building so ill-designed that even The Tale of Tomorrow has to show it surrounded by weeds.

But Jørn Utzon’s 1973 Sydney Opera House, and Eero Saarinen 1965 St. Louis Arch, and Ricardo Bofill’s 1965 La Muralla Roja apartment complex in Spain: beautiful constructions, each of them, in their way. William Pereira’s 1972 Transamerica Pyramid in San Francisco isn’t anywhere I’d want to work, but there’s no denying that it remains a striking building. Walter Netsch’s 1963 Air Force Academy Chapel isn’t anywhere I’d want to worship, but it stands out as well against the mountains in Colorado Springs. John Lautner’s 1968 Elrod House in Palm Springs isn’t a house anyone would want to live in, but the power of its presence can’t be denied. 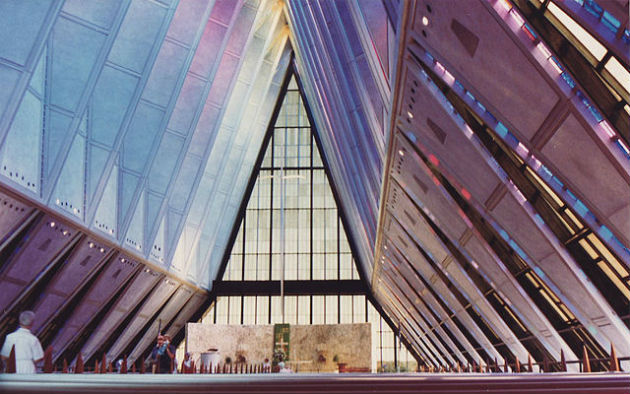 As the editors of The Tale of Tomorrow try to place these futuristic buildings in architectural context, however, what emerges is their weak sense of the impulses behind the modern turn. There’s modernist poetry and modernist novels, modernist paintings and modernist sculpture. The adjective modern seems to qualify everything from philosophies and political theories to the design of suit jackets and cloverleaf highway interchanges. But architectural theory remains the model, the synechdochal center, of much of what we mean by the modern, precisely because it incorporates both the negative and positive projects of modernity.

Modern times are born from a sneer at the past and a simultaneous smile at the future—and from them both, consequences flow. The negative impulse of modernity is the destructive one: a belief that the old prejudices and precepts of past ages must be cleared away so that a new age can emerge. The positive impulse of modernity is more constructive: an attempt to show now what the desired future will look like. And modern architecture, by its nature, partakes of both these impulses.

The futurist buildings that appear in The Tale of Tomorrow definitely have their share of the sneer. Oscar Niermeyer’s designs for Brasília, begun in 1956, are possible only if one believes that the fools of past ages simply didn’t understand the architectural power of cement—and the decaying, rebar-stained constructions of Brasília, like the innumerable concrete buildings of brutalism and other modern fads, show the short-sightedness of that negative impulse.

But the futurism of the era also partook of the positive modern impulse. The buildings were a declaration that new materials, new freedoms, and new artistry were bringing about a golden age of equality, beauty, and power. They were confident, in a way few buildings have matched in the fifty years since. Postmodern buildings, for example, certainly lack that naive confidence. The postmodernist architects were, at best, gleeful—which isn’t the same thing, at all—as they deconstructed the past to build their parodic buildings. I don’t want to live in George Jetson’s space-age cartoon house, but better there than the rusty crashed-spaceship of Robert Bruno’s 2008 Steel House in Lubbock, Texas.

All of which makes The Tale of Tomorrow a surprisingly depressing book. Conceptual architecture simply isn’t as powerful as it was in the late 1950s and early 1960s—and, yes, in some ways, that’s a good thing. But it’s still a loss of innocence and confidence to admit that Tomorrowland never arrived and the future isn’t what it used to be. And it hurts to watch, through the book’s pictures, the weakening of the promises offered by futurist designers over the years. Those architects in their youth began in gladness. Thereof in the end came despondency and sadness.