Kevin Smith has lost his mind

A few years back, Kevin Smith threw what can only be described as a snit fit regarding the critical reaction to Cop Out (2010). A rather dreadful, wholly generic, and utterly unfunny buddy "comedy" starring Bruce Willis (who reportedly walked all over Smith on set and mailed in his performance) and Tracy Morgan, critics savaged Cop Out.

Smith, perturbed by the drubbing, compared it to a gang rape and "bullying a retarded kid." To repeat: He called his own movie "retarded," and then wondered why critics took a whack at it. Because of their refusal to just sit back and let the stupid wash over them, Smith swore off allowing critics into any of his flicks ever again. "I'd rather pick 500 randoms from Twitter feed & let THEM see it for free in advance, then post THEIR opinions, good AND bad," he ranted on Twitter. "Same difference."

It was a pathos-laden moment. I felt genuine pity watching a director I had grown up admiring—whose films I owned, whose commentary tracks I had listened to, whose speeches I had absorbed—reduced to throwing a temper tantrum because some people had written mean things about a movie that he seemed to understand, deep in his heart, was crap. After releasing the small, poorly seen indie horror flick Red State (2011), Smith retreated from the filmmaking world, focusing on his popular podcast and an AMC show set in the comic book store he owns.

I take this walk down memory lane not because it gives me any pleasure (nothing about Cop Out gives anyone any pleasure). Rather, I do so because the past is the key to understanding just what’s wrong with Smith's latest film, Tusk, a horror-comedy that is both oddly terrible and oddly personal. I can’t help but feel it’s a critical trap. 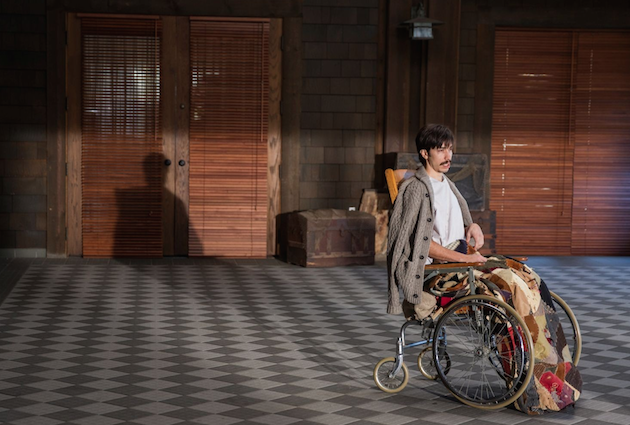 Wallace Bryton (Justin Long) of Tusk is the host of the "Not-See Party" (say it out loud, preferably in a German accent, for the full effect of the joke) podcast along with his partner Teddy (Haley Joel Osment). "Not-See" because, you see, their shtick is for Wallace to travel to some distant locale and interview a weirdo before recounting his exploits to Teddy, who claims he doesn’t like to travel.

While searching the Great White North for a tale worth podcasting, Bryton stumbles upon one Howard Howe (Michael Parks). Howe lives alone in a creepy Manitoba mansion, just dying for someone to come visit him. He wants to regale visitors with stories of his time spent with Ernest Hemingway, to pass on his legendary stories. And, of course, to turn a man into a walrus.

There are moments of humor in the film’s early going. Wallace and Teddy’s banter feels natural enough, and there are some good-natured jabs at Canada that conjure up a smile or two. Additionally, Smith does a good job of building tension once Howe’s demented plan comes into focus. The genre of body horror thrives on creating a sense of helplessness in the characters and audience alike; once it becomes clear that Wallace isn’t surviving this film intact, the stakes are raised considerably. Isolated from the outside world and trapped by a demented lunatic with unspeakable designs on his person, we are right there with Wallace, terrified of what will happen to him in Howard Howe’s home.

And then everything goes horribly, inexplicably sideways. 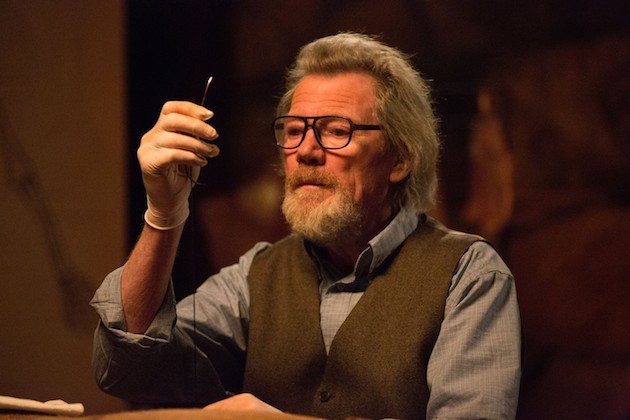 If you had to pinpoint the exact moment it became obvious that Smith was simply messing with us, it might be when Long—dressed in a cheap-looking rubber suit that is supposed to be Wallace’s skin stretched into Walrus-sized dimensions, tusks jutting out of the roof of his now-tongue-less mouth—begins to wail while Park casually lays against his side, dreamily staring up at the ceiling of a crudely constructed walrus sanctuary. The sight is ridiculous. Smith drives by "horror," shoots past "comedy," blows through "camp," and discovers a brand new realm of intentional idiocy.

The preposterousness of the shot serves as a jarring contrast to earlier, more introspective moments in the film, such as Wallace’s discussion with his girlfriend Ally (Genesis Rodriguez). She is distressed by the mean-spirited nature of his Not-See Party exploits, which include viciously mocking a kid who accidentally cuts his own leg off while playing with a samurai sword. She says she wants the old, sweet Wallace back. His response is to sneer: Why would he want to go back to the lame old Wallace who talked about Star Wars (like, say, the clerks in Clerks) when the awesome new Wallace was in talks with AMC to bring his podcast to the small screen (like, say, Kevin Smith circa 2014)?

Smith is clearly inviting audiences (and critics) to draw a comparison between him and his creation. But then along comes the ridiculous image of Walrus Long and Michael Park and you realize that the image is just a trap, one he can spring on anyone who tries to psychoanalyze him, one that he can throw in your face and say, "What, you thought I was being serious? In a movie where a man is turned into a walrus so a psycho can cuddle with him? Who’s the idiot now?"

More damning than Kevin Smith’s head-games, though, are his pacing problems. After building tension and ratcheting up the suspense, Smith shifts focus and spends much of the last third of the film on Ally and Teddy looking for Wallace with retired, alcoholic cop Guy Lapointe (an unrecognizable Johnny Depp). It’s hard to express just how distressingly terrible Lapointe’s two scenes are. The first involves sitting in a fast food joint discussing the nature of Howard Howe (Lapointe is the only one who takes their worries seriously). That sequence is simply annoying.

The second, though, shows us Lapointe meeting Howe some years previously. It is, in all seriousness, one of the worst things I’ve ever seen committed to film. Depp is sporting a French-Canadian accent, a mumbling delivery, and severely droopy eyes while Park plays Howe like a mentally disabled simpleton. All of it suggests a pair of actors actoring really hard, far harder than their director can control. Smith, it seems, was too in awe of his stars to give them anything in the way of useful direction—and too timid to cut anything from the excruciating horror show that was their extended interaction. Imagine the scene where Clarice talks to Jame Gumb in the foyer of his home toward the end of The Silence of the Lambs, but totally bereft of tension, utterly free of menace, and with each of the actors embarrassing themselves by affecting idiotic tics.

And then extend that sequence to 15 interminable, awkward, dull minutes.

Tusk would’ve been better off as an episode of Showtime’s Masters of Horror. There’s simply not enough there, in terms of plot or of intellectual or emotional depth, to justify 100 minutes of screen time. Like Ally, I miss the old Wallace. But I don’t get the sense he’s coming back any time soon.