Running for a Hero: What I Saw at the Country’s Most American Race

This piece originally appeared in the Washington Free Beacon on September 28, 2016. It is being republished to commemorate the 20th anniversary of the September 11, 2001, terrorist attacks.

NEW YORK—It’s no walk in the park to convince 30,000 New Yorkers to agree on anything. It becomes exceedingly tougher when you need them to agree to wake up at the crack of dawn on a Sunday to travel through the Brooklyn-Battery Tunnel by foot.

Frank Siller, however, has a pretty compelling story to tell.

His brother, Stephen Siller, had finished his shift at FDNY Squad 1 early in the morning of September 11, 2001. Stephen was the youngest of eight children, and both of his parents passed away before he was ten years old. His older siblings were like parents to him, and he was on his way to meet Frank and his brothers for a round of golf when he heard on his scanner that a plane had hit the World Trade Center.

Stephen asked his wife to let his brothers know that he would catch up with them later, got his gear, and drove his truck toward ground zero. Authorities had already closed the tunnel by the time Stephen arrived, so he put on his 60 pounds of gear and decided the fastest way he could get to the towers was by foot. He was right. He made it there in time and rushed into the building, risking his life in the hopes that he could save the lives of others. His brothers never heard from him again.

The next year 2,500 people joined the Siller family to follow in Stephen’s footsteps to honor his sacrifice and raise money for the families of other first responders who sacrificed their lives.

Now, 15 years since Stephen’s sacrifice, the Tunnels to Towers race is the biggest it has ever been. This past Sunday, I joined more than 30,000 others for the three-and-a-half-mile run from Red Hook to the site of the World Trade Center.

The atmosphere as we gathered in Brooklyn was special. The runners were packed along the long stretch that leads toward the tunnel entrance while firefighters and active military mingled with civilians. There was a beautiful abundance of red, white, and blue, from runners who brought large flags to people wearing their most American garb. There was also a surprisingly high number of patriots who happen to own American flag-patterned spandex pants.

Spirits were high as the masses listened to Frank tell his brother’s story over large speakers strung from lampposts. After the national anthem, Stephen’s nephew performed Make Me a Channel of Your Peace, the prayer song of St. Francis, who serves as the patron saint of the race.

The program was long and the race got started behind schedule, but if the goal was to get everybody amped up, it worked. Once we were finally set loose, everybody seemed to run at a faster pace than they expected as they headed for the tunnel entrance, likely expending too much energy before they even got underground.

It’s no easy race. The reason why you’ve probably never run through a two-mile-long tunnel is because it is a terrible idea. Even with the perfect weather we had on Sunday, it is muggy and feels like there is not enough air to go around for all of us. 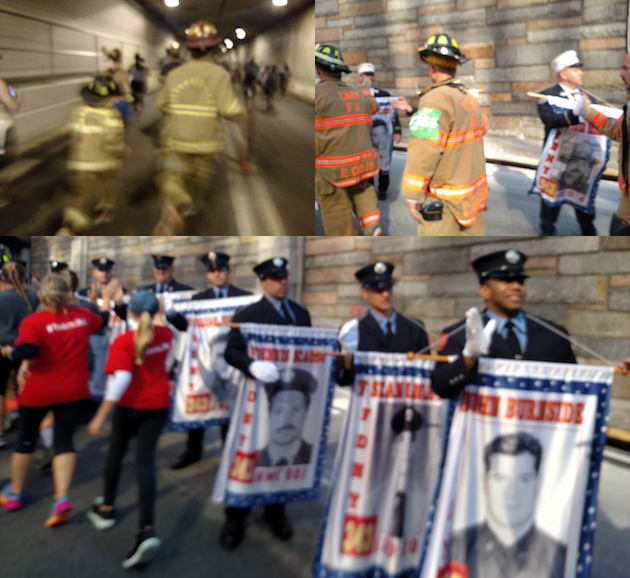 The doubt started to kick in for me—a guy who only runs if I need to catch a train—once the tunnel turned into a long, steady hill on the ascent from under the East River into Manhattan.

But it’s hard to complain when you look around and see that a lot of people have it tougher than I do. Thousands of firefighters from towns around the country, including 90 who traveled from the United Kingdom, were running with all their heavy gear on, just as Stephen did. Others I passed were running with heavy hearts, wearing shirts or pins they made for the race to honor loved ones who died alongside Stephen.

Once you make it out of the tunnel, the atmosphere surrounding the race is more than enough to propel you the remaining mile-and-a-half.

Lining the side of the street as you emerge from the tunnel are firemen wearing their formal uniforms, each holding a banner with the image of one of the fallen to commemorate the 342 firemen who died alongside Stephen that day. Then come members of the NYPD and Port Authority officers, also with banners. They all shake or high-five passers-by, offering encouragement as the runners thank them for their service.

It is sobering when you realize how much distance you cover running past the images of the fallen, a reminder fifteen years later of just how many gave their lives that day. One group of firefighters walked alongside and shook every single hand.

As you round the corner past the uniformed banner holders, the rebuilt Freedom Tower first comes into sight, but the race goes on—throwing runners west toward the waterfront in Battery Park.

The final stretch of the race is littered with rock bands, cheerleaders, marching bands from local schools, and even a FDNY boat on the Hudson River launching streams of water into the sunlight to create a rainbow.

I crossed the finish line in just over 34 minutes and immediately saw Frank Siller standing by America’s mayor Rudy Giuliani. Together they clapped finishers through toward a cover band that I, in my exhausted state, momentarily thought was actually Bruce Springsteen.

Some of the city’s finest restaurants handed out free barbecue ribs and pizza. Those resourceful enough, like me, managed to track down beer. Women, including my mother and girlfriend, fawned over flattered firemen, who gladly posed with them for pictures. Once all the runners finished the race, the uniformed banner holders who stood outside the tunnel were led up to the stage by FDNY bagpipe players.

After 15 years, the race is bigger and better than ever. The Stephen Siller Tunnel to Towers Foundation now devotes itself not only to 9/11 first responders but also to building "smart homes" for catastrophically wounded veterans.

My legs both still hurt, but I will be back to run it again next year. I might even train.