Imagine Moses as a high-level bureaucratic functionary who has a bit of skill with the sword and a petulant, invisible God-child telling him he’s not working hard enough to free his people before showing him up with bloody miracles that make his penny-ante guerilla warfare look like small potatoes. That’s Exodus: Gods and Kings.

Christian Bale stars as Moses, the adopted brother of Ramses (Joel Edgerton). Moses saves Ramses’ life in battle, prompting the soon-to-be pharaoh’s suspicion. A soothsayer, you see, predicted that during the battle a future king would save the life of the heir to the throne.

Ramses has good reason to worry. On a trip to one of the kingdom’s provinces, Moses is told that he’s an Israelite, whose people are being worked to death as slaves by the Egyptian kingdom. Upon learning the truth, Ramses exiles Moses, who goes on to find a new family and some measure of peace in the desert. Until, that is, God comes to him in a vision and informs him that he must win Israel’s freedom.

What follows is the story we all know: plagues and parted seas and such. There’s an almost perfunctory nature to it, as if we’re being treated to a "greatest hits" version of Moses’ life. You can’t help but sense that there’s a compelling family story somewhere in the deleted scenes—Ramses’ scheming mother, Tuya (Sigourney Weaver) is given such little screen time you might miss her if you blink, while Moses’ reunification with his family following liberation lacks emotional oomph. I guess we’ll find out when Ridley Scott releases a seven-hour director’s cut at some point next year.

Exodus: Gods and Kings marks the third time Scott has tried to recapture the magic of Gladiator, 2000’s Oscar-winning sword-and-sandals epic. The returns have diminished each time: Kingdom of Heaven has its moments, especially in the extended version, but Robin Hood is simply dull.

Exodus is rarely boring, but it lacks gravitas compared to its predecessors. One small example: Ramses’ father, Seti, plays much the same role in Exodus that Commodus’ father, Marcus Aurelius, played in Gladiator. He is the wise ruler, the surrogate dad. Seti is played by John Turturro—a great actor, undoubtedly, but of a rather different sort than Aurelius’ Richard Harris. 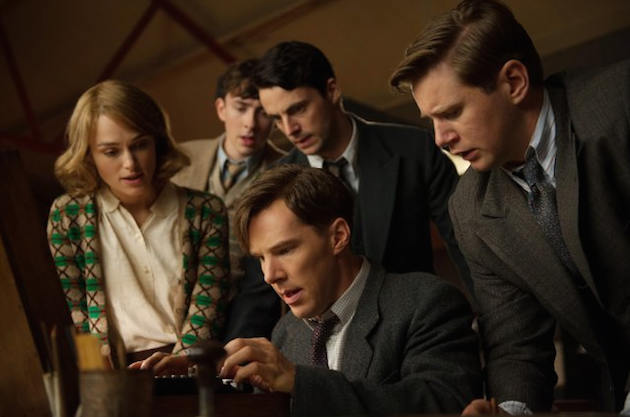 The movie begins some years after World War Two, as British police are investigating a break-in at Turing’s home. Nothing has been stolen, but Turing gives off a suspicious vibe, prompting Det. Nock (Rory Kinnear) to look into his military record—a record that turns out to be suspiciously blank.

Nock’s investigation is intercut with Turing’s effort during the war to crack the code of Enigma, the legendary Nazi encryption machine. Turing, a legend in his own mind, has been saddled with a group of cryptographers and linguists he considers unworthy of the task, and refused the funds necessary to build a device that will unlock Enigma’s secrets.

Unable to get anywhere with Commander Denniston (Charles Dance), Turing goes over his head. Straight to 10 Downing Street, as a matter of fact, where Winston Churchill signs off on his plan through MI6 operative Stewart Menzies (Mark Strong).

These efforts are also intercut with flashbacks to Turing’s days as an awkward, closeted student at a British prep school. As we see his painful interactions with his fellow bookworms, we come to understand why he is so stilted around his coworkers. And we better comprehend the tragic conclusion of Nock’s investigation into Turing’s personal life.

The Imitation Game is a competently made period drama overflowing with acting talent that tells the story of a complicated man changing the world while also educating us as to the evils of prejudice and bigotry. It is weapons-grade Oscar-bait designed to earn months of plaudits before being promptly forgotten.

So bravo! Three stars! A handful of statues! And, in all likelihood, zero repeat viewings.