You might not think that a biopic about a Hollywood legend on the glide path to her early death in swinging 1969 London and a comic book movie about a villain on the loose in 1970s New York would have anything in common besides titles that begin with the letter J. And yet Judy and Joker are very much alike. They both center on incredibly flashy lead performances with stars who appear in nearly every frame of the picture. They are both unflinching examinations of the toll of mental illness. And they are both astoundingly unpleasant.

Renée Zellweger (playing Judy Garland) and Joaquin Phoenix (playing the Joker) give performances that are consciously designed to enter the annals of movie legend, to make viewers leave the theater saying "my God, that was one of the greatest pieces of acting I've ever seen."

Now, without question, they are acting. Oh man, are they. They are acting like few people have acted before. They are scrunching up their faces and changing their expressions and popping their eyes and twisting their bodies. You're not likely to experience in any other theater the sheer amount of acting, the bottomless quantity of acting, the airless and relentless and unyielding camera-pressed-up-against-their-faces acting, you get in Judy and Joker.

But is it good acting?

At some points, Zellweger and Phoenix are great. At others, they're just way over the top. Sometimes you forget you're watching an actor and you believe you're seeing something transcendent. And sometimes you feel like you've eaten five boxes of Entenmann's donuts at one sitting and you're going to be sick if you have to watch another second. They're exhausting to watch. It's like they're demanding you give them an Oscar or they'll release a special longer director's cut featuring another hour of them acting acting acting.

The movies themselves are expert, and the skill with which they have been made only renders them more intolerable.

Joker is yet another origin story about Batman's rival. Thirty years ago, Jack Nicholson's Joker was driven to become the Insane Giggler because he fell into a vat of chemicals and came out with a rictus grin. Twelve years ago, Heath Ledger's Joker was the embodiment of chaos whose origin story was that he didn't even have an origin story; his smile was all makeup. Now we have Joaquin Phoenix's Arthur Fleck, whose origin story is that he lives with a crazy mother who chained him to a radiator as a kid, is on seven medications, has a Tourette-ish condition in which he laughs at inappropriate times, and gets beaten up regularly on the mean streets of 1970s New York.

And I mean "mean streets" a la Martin Scorsese. This movie bears no relation to any superhero comic book movie before it. Rather, Joker is director/cowriter Todd Phillips's full-length tribute/ripoff/mashup of Scorsese's Taxi Driver and The King of Comedy, with the Joker as a combo of would-be assassin Travis Bickle from the first and Johnny Carson kidnapper Rupert Pupkin from the second. (To hammer the point home, Phillips has given Robert De Niro—who starred as Bickle and Pupkin—the part of a late-night host right out of The King of Comedy.)

People are going to line up this weekend to see Joker, only to find that there are neither Batcaves (as in the Nicholson Batman) nor torturous moral dilemmas involving the potential deaths of thousands (as in The Dark Knight). Rather, they are going to spend two hours watching Joaquin Phoenix start off as a withdrawn insane person who only torments himself and then slowly but surely transform into a psychopathic murderer. There isn't a light or comic or witty moment here. This Joker thing is as serious as a psychotic break. I guess it's gripping in its way, and its rendition of New York at its worst is brilliantly art-directed. But Joker is as fun as a root canal. 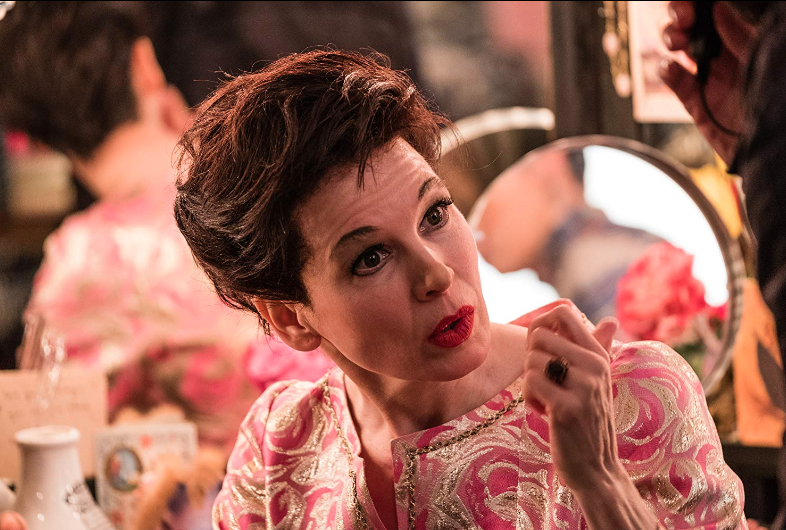 The Judy Garland of Judy is an impossible person. She's drunk and drugged and selfish and addled and mean. So the movie, like Joker, is a chore to sit through. Even so, director Rupert Goold's movie is kind of a whitewash, as the real Judy Garland was actually far worse than the person we see here. Zellweger's Judy is a loving mother who is working desperately hard to make enough money to secure a home for her two young children. In actuality, the late-in-life Garland was a narcissistic demon who did things like throw a butcher knife at her 11-year-old son's head and keep her teenage daughter up all night every night because she was on so many different uppers and downers she herself couldn't sleep.

So by all means, go see Joker if you're under 50 and see Judy if you're over 50. But don't see them both or the only thing you'll ever watch again is the Yule Log or a screensaver of the view above Dubai.