When I walked into the "Dorothea Lange: Politics of Seeing" exhibit at the Frist Art Museum in Nashville, I entered a pristinely curated history book. The black-and-white photographs hanging neatly on the walls provide the museum's visitors with an account of history by the people who lived it. There are ex-slaves and their children still working in fields under direction of white plantation owners, with dusty faces gnarled from sun; migrant workers in the Dust Bowl whose hands are sun-burnt and calloused from field work, standing by their underfed children; somnolent stares from across a segregated taproom; and wet eyes of Americans entering internment camps at the dawn of the Second World War.

Dorothea Lange proved an artist can create an image so potent, that her work is known better than her own name. Lange may have not wanted it any other way: She saw herself as a social activist first, with her camera as a tool for change.

Until May 27 at the Frist, you can see Lange's most iconic photograph Migrant Mother (1936). The photo—one of the most reproduced in the world—was made while Lange worked to document Dust Bowl refugees for the Farm Security Administration. Although she worked for government agencies, many found her work exposed government faults.

Before she became a leading artistic activist, Lange was comfortably making money in California as a photographer for wealthy clients. "I had the cream of the trade," she said. "I was the person to whom you went if you could afford it." She was born in Hoboken, N.J., in 1895. At seven years old, she suffered through polio and was left with a permanent limp. Lange moved to San Francisco in 1918 and married Maynard Dixon, her first husband and the father of her two sons. After the Great Depression struck in the early 1930s, she noticed a homeless man wandering along the sidewalk outside her studio. His itinerant life inspired Lange. She grabbed her camera and took to the streets and embarked on a journey of realism in photography.

In 1935, Lange divorced Dixon and married Paul S. Taylor, a social activist and sociologist from University of California, Berkeley, who was enamored with her politically charged photographs. At the Frist, the most eye-catching photos are those of ex-slaves and their children working in Southern fields. Ex-Slave With a Long Memory (1937) is perhaps the most striking and heartrending, by virtue of both the title and image. An elderly African-American woman stands in a dry field; her raggy clothes drift in the breeze. She looks angry; her face is twisted in a scowl—all her wretched memories are rising up as boiling water through the photograph.

This ex-slave's anger is followed up in more photographs of ex-slaves and descendants of slaves who were still stuck as sharecroppers on plantations. Plantation Overseer and His Field Hands, near Clarksdale, Mississippi (1936) and Restaurant Segregation (1938) constitute a vigorous condemnation of the treatment of African Americans in the South. 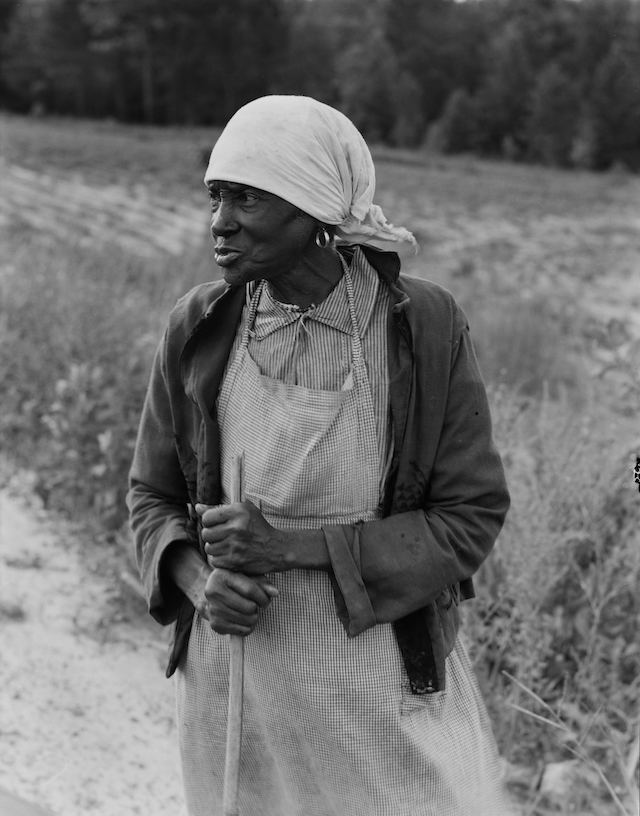 But Lange was not only concerned with race: In 1936 the Farm Security Administration hired her to photograph Dust Bowl refugees. These photographs amply display the plight and poverty migrant workers suffered during the Depression. They show families walking along dusty roads in run-down shoes, or in caravans furnished with lumpy mattresses that couch children who look like they rolled in dirt. Damaged Child, Shacktown, Elm Grove, Oklahoma (1936) is a haunting photograph of a young girl whose life was displaced in the Dust Bowl. Her greasy shirt hangs loosely from bony shoulders, and her hollow, smudged face is marked by black eyes, shadowed by darker brows that seem to be permanently crossed in worry.

The Frist accompanies the photographs with Lange's copious notes, which include quotes from her subjects. In Displaced Tenant Farmers, Goodlet, Hardeman (1937), you meet the gaze of six farmers. Lange's notes quote them: "‘Where are we gonna go?' ‘How are we gonna get there?' ‘What we gonna do?' ‘Who we gonna fight?' ‘If we fight, what we gotta whip?'" Their arms are crossed or their hands are in their pockets. Their look is almost challenging, as if confronting the viewer: "We know you feel sorry for us. But what is there to do?"

Lange was, and continues to be, criticized for cropping some of her photos for the FSA. In some cases her decisions to crop can be justified on artistic grounds. Ditched, Stalled, and Stranded, San Joaquin Valley, California (1936) was cropped to focus on the man in the photograph, whose light-colored eyes are wide open but strained. Wrinkled skin clings to a sunken, tanned face. You can almost smell the dust and feel the heat from his steamy metal car. Did Lange crop the photo because his partner, sitting next to him, carried a less distressed expression, undermining the theme of despair? The answer, unfortunately for contrarians, is no. The woman sitting next to him appears just as distraught. But Lange made a more striking image by choosing to single out the man. It appears to show the singularity and isolation of his thoughts, even while they were shared by so many others.

In Migrant Mother, Lange ended up removing a small detail: In the original image the woman's thumb in the bottom right corner is grasping a tent pole. In doing so, she showed her artistic inclinations as a photographer, but enraged those at the Farm Security Administration. Roy Stryker of the FSA thought it would make people believe that photographs were staged. Today, very few prints survive of Migrant Mother that show the thumb. 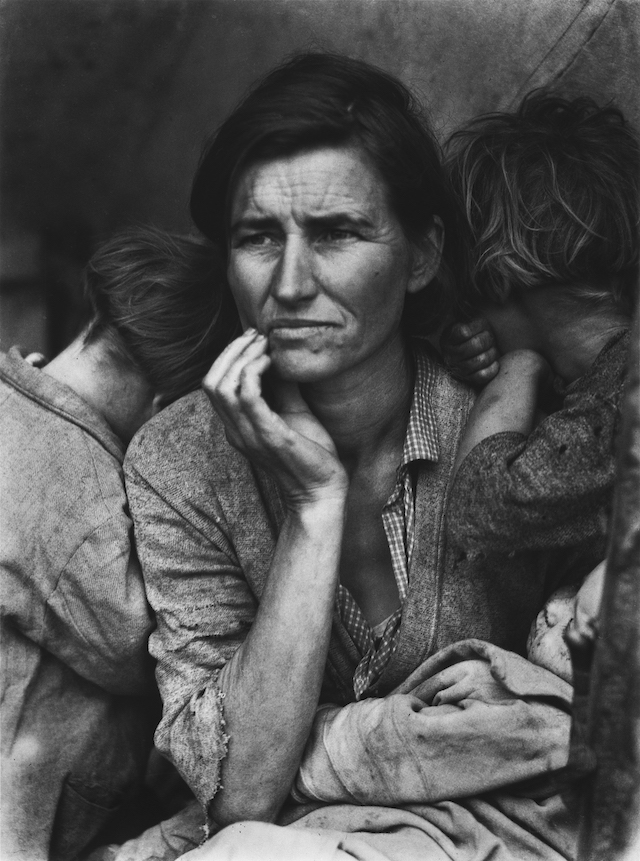 People who compare her cropped photos and uncropped photos may believe Dorothea Lange was manipulating how history was recorded, but the exhibit shows both sides of the coin. Lange appears to crop a photo to manipulate her audience in one of the most famous series on Japanese-American internment.

Lange was hired in 1942 by the U.S. War Department to document the relocation and imprisonment of 120,000 Americans of Japanese descent. She was forbidden to photograph barbed wire fences, armed soldiers, or guard towers at the camps. But when she saw the crowds forced out of their homes, whose businesses were shut down, she suffered a nervous breakdown.

Yet Lange continued her work. 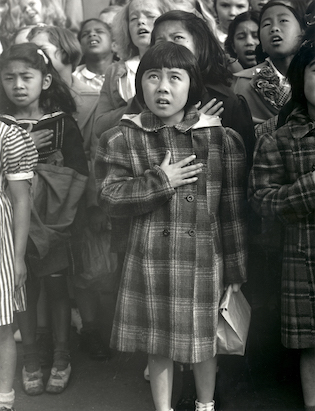 The series she produced is the most moving in the exhibit. Children with vacant eyes, clutching their parents, parents holding onto their pride and hope—some even smile. Oakland, California (1942) shows a small family unit waiting to be shuttled from their home; individual portraits such as Young Man at Manzanar Relocation Center (1942) shed light on how separate people, not just children, were affected.

Photographs of the relocation centers—or internment camps—reveal sparse sheds in rows where the Japanese Americans were re-homed. Other photos show the prisoners toiling in fields. Luckily for Lange, bureaucrats did not know she wanted to use the images to expose the disturbing reality of the evacuation, so there are a wide-ranging array of photographs. Once the photographs were signed over to the agency, however, they were impounded and censored by the Army for 30 years. "They had wanted a record," Lange said, "but not a public record."

When Lange cropped a photograph of a young girl of Japanese descent singing the Pledge of Allegiance with tears in her eyes, she was again accused of manipulation. "San Francisco, Calif., April 1942—Children of the Weill public school, from the so-called international settlement, shown in a flag pledge ceremony," Lange wrote in her notes. "Some of them are evacuees of Japanese ancestry who will be housed in War relocation authority centers for the duration." In the uncropped photograph, a smiling child is next to the girl. But Lange wanted to reveal what she saw most at the camps: The pain of leaving home by force and fear of the future.

Whichever photograph you look at—cropped or uncropped—you will see individual Americans, vividly real, each living through stories that have faded into generalized paragraphs in history books. Lange helps us see past the politics and into the eyes of those who were affected by poverty, racism, and war. Lange's work is well worth a visit to the Frist, to walk through an unfortunate but well-documented past. 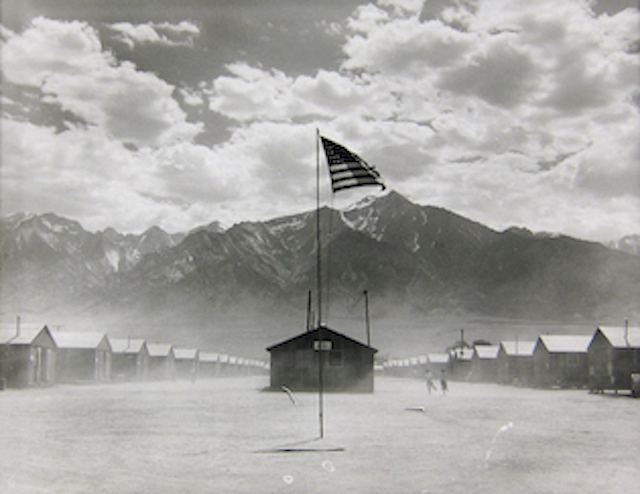 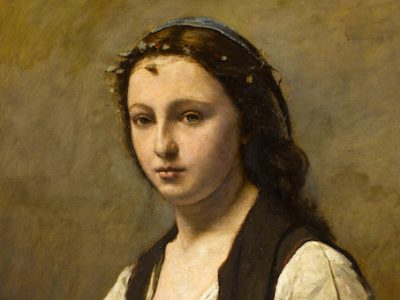