REVIEW: How Hollywood butchered a cult classic to appease China

The new Red Dawn remake is a fine example of a number of dispiriting trends in the filmmaking industry. The picture was based on a brand name instead of a heartfelt original tale. The studios mutilated it in order to placate Chinese Communists. And it was served up to audiences that studios assume will eat whatever they are served.

Ever-increasing budgets and declining domestic audiences have forced studios to look for box office success abroad. "Aimed at Bangkok and Bangalore as much as at Bangor," David Denby recently wrote in the New Republic, "our big movies have been defoliated of character, wit, psychology, local color." He’s right.

But it is not only the adult dramas championed by Denby that have been sapped of their vitality; action films, too, have seen plot and character sacrificed for commerce.

Just compare the original Red Dawn with its remake.

Made in 1984 for a budget of a little more than $4 million, John Milius’ story of teenage American partisans fighting a Communist invasion in the mountains of Colorado during World War III was a modest financial success, with a gross of more than $38 million.

Starring a platoon of then-unknowns such as Patrick Swayze and Charlie Sheen, Milius’ film, unlike its current iteration, at least had a plot that was somewhat plausible.

Unrest caused by a failed wheat harvest in Russia, along with the removal of nuclear weapons from Europe and communist victories in Central America, left the United States vulnerable to a Russian first strike and invasion through Mexico.

There was a dash of humor, but this was a dark picture. Red Dawn held the Guinness record for most acts of violence per minute and hinted that its female protagonists suffered a brutal rape at the hands of Communist invaders. Though Red Dawn may have been overwrought, it at least had the decency to take itself, and the audience, seriously.

Work began on a remake of the cult classic in 2008. From the start, it looked like a pure cash grab by the studio: combine a known property with a big budget and wait for the cash to roll in. 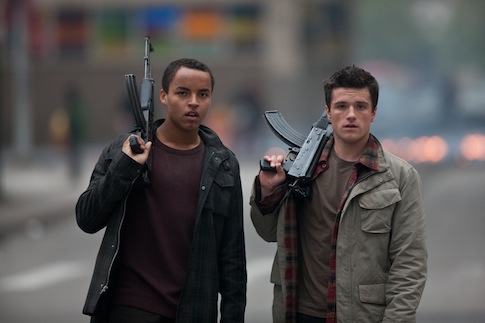 When I interviewed John Milius in 2009, the film was already in trouble.

"I hear it stinks," he said of the picture, which at that time was about to begin filming. "I asked someone, ‘Who are the villains?’ and they couldn’t even tell me."

Maybe that’s because the creative team actually didn’t know who the villains would be.

Sometime between the start of production and the remake’s release, which was delayed due to the production studio’s bankruptcy, the villains changed nationality. No longer would the invading Communist horde originate from China, which has the largest military in the world, a sophisticated cyber warfare department, and is widely recognized as a strategic competitor of the United States.

The American West Coast was now to be invaded and occupied indefinitely by North Korea, the starvation-prone Hermit Kingdom that can barely keep the lights on in Pyongyang and has trouble launching missiles. 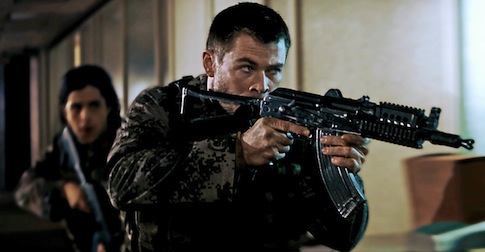 The remake has other problems. It was filmed in a hyper-kinetic, music video style, and has traded seriousness of purpose for ironic detachment. But the largest mistake is this: The digital alteration of the antagonists’ banners, uniforms, and nation of origin destroys whatever plausibility the film might have had.

The audience with which I saw the remake tried valiantly—and failed miserably—to stifle its derisive laughter. Joe Filmgoer may not be able to identify the tenets of Juche ideology, but he does know that the North Koreans are about as likely as the Norwegians to mount a full-scale invasion of the United States.

Why was the change made? Because the distributor didn’t want to risk alienating the potentially lucrative Chinese market.

American film studios for years have been trying to sell tickets to the Chinese film audience. Their methods are not always pretty. Several studios are under Securities Exchange Commission investigation for allegedly bribing their way into the market. Major Democratic donor Jeffrey Katzenberg set up a deal to build an animation studio in the nation after a meeting with Vice President Joe Biden and Chinese leader Xi Jinping.

American film studios have been more than willing to censor their work to secure Chinese distribution. Thirteen minutes of Men in Black 3 were censored in China because the authorities feared that a scene in which government agents erased a witness’ memory would too closely resemble Chinese censorship. (The Chinese censors who ordered the cut clearly lack a sense of irony.)

As Ted Johnson has noted in Variety, "Acceptance of Chinese edits has much do to with the way studios and producers gain entry into the market: The challenge is to establish trust, not to push the envelope."

Capitalism with Chinese characteristics involves more than just mercantilist policies, endemic corruption, human rights abuses, and a military buildup. It also involves telling American filmmakers what they can and cannot put on the screen.

What do the studios get? Men in Black 3 earned more than $77 million in China for a global gross of $624 million.

To sell tickets in China, though, studios must first earn access to its market. And that is a far-from-certain proposition for a movie like Red Dawn that has no stars and a stirring pro-American message. China allows only 34 foreign films—14 of which must be "enhanced" by processes such as 3D—to be released in the nation each year. Studios get only 25 percent of the gross.

"I think the feeling was the filmmakers decided to be more sensitive to one of our world partners," said Josh Peck, one of the Red Dawn remake’s stars.

And nothing screams sensitivity like engaging in censorship at the behest of a "world partner."