Raimi the Great and Powerful

Review: ‘Oz, the Great and Powerful’ is stylish and entertaining

I owe Sam Raimi an apology.

When the first spate of commercials and trailers hit for Oz, the Great and Powerful, I was skeptical. I snarked on Twitter. I doubted the man behind the Evil Dead films and the first trio of Spider-Man movies, fearing we were in for an experience like Tim Burton’s recent Alice in Wonderland, a sodden retread with a bit of flash that was comfortable with overwhelming, rather than winning over, audiences.

Instead, Raimi has created a world that is familiar yet dangerously different, and populated it with characters who have a spark and life all of their own.

Though technically an adaptation of Baum’s novels—which are in the public domain, and thus free to adapt—and not the 1939 MGM musical—which is still under copyright and thus not free to adapt, prequelize, or sequelize—it is clear Raimi’s film owes much to Victor Fleming’s classic. There are brief homages here and there (I saw a lion of the yellow-bellied variety and a host of scarecrows, but no tin men) and witches riding both on brooms and within bubbles. 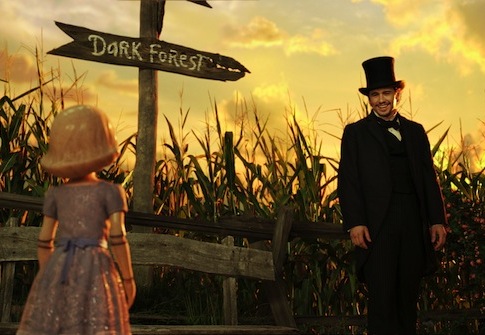 James Franco stars as the titular Oz, a carnival magician with a penchant for womanizing who feels destined for greatness—a destiny he hopes he has fulfilled after hitching a ride on a tornado to the land of Oz. Shortly after his hot air balloon crash lands, Oz falls in with a mysterious, beautiful traveler (Theodora, played by Mila Kunis) who insists he has arrived to fulfill a prophecy and bring peace to the kingdom.

Not to mention getting his hands on a boatload of gold, a throne and scepter, and the adoration of the masses. Everything a huckster could crave. After being told by the scheming Evanora (Rachel Weisz) that the only way to save the kingdom is to strip an evil witch of her power, Oz sets off to do just that. Things, however, are not quite as they seem. Oz must conquer his self-doubt to unravel the mystery at the heart of his newfound home.

This is most definitely a "Sam Raimi film," filled with shots and camera techniques he first perfected in the Evil Dead pictures before bringing them to mainstream blockbusters. It is replete with Dutch-angled zooms to heighten audience tension and montages of characters, often shot in overlapping close-ups. Indeed, the montage in Oz the Great and Powerful in which the forces of good prepare for war with Evanora’s flying baboons and palace guards feels as though it was lifted almost directly from Army of Darkness or The Quick and the Dead.

That we can so distinctly sense Raimi’s stamp is a good thing. His particular brand of filmmaking is filled with exuberant joyfulness—one never doubted his love of movie magic while watching his independent features, and that love has transferred from the  $85,000 Evil Dead to the $35 million Quick and the Dead to the $325 million Oz the Great and Powerful.

That exuberance makes up for a few questionable performances. Franco never seems sure whether or not he should be winking at the audience, veering wildly between the smarmy charm of a huckster and the grandiloquent delusions of a man out of his depth. Kunis, who is normally delightful and frequently the best part of any movie she is in, never seems quite comfortable onscreen. She doesn’t seem right as Oz’s demure companion in the early going or as the screeching, green-skinned witch she becomes later on. Her biggest weakness is her voice. Her shrieks come off less terrifying than tinny.

Weisz, however, is fantastic as the scheming Evanora: calculating and charming, her venomous wiles set in motion the palace intrigue that drives much of the film’s plot. The most interesting aspect of the picture may be the view it gives us into the lives of Oz’s witches—they are neither angels nor demons, just schemers divvying up the kingdom. 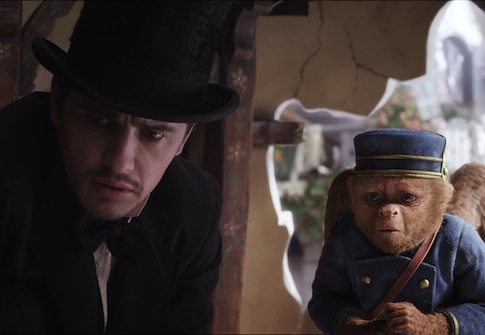 The mood is lightened by excellent comic performances generated by computer and voiced by Zach Braff and Joey King as, respectively, a flying monkey and a walking, talking doll made of china. And, this being a Sam Raimi film, a heavily made-up and costumed Bruce Campbell also plays a bit part. So keep an eye out for him.

I’ll leaven my pro forma rant against 3D—which is awful and which you should not pay extra to endure—by noting that the picture’s title sequence is actually quite nicely done and another demonstration of the fact that animation is the only format within which 3D comes close to working.

However, that good will was quickly washed away by an awful shot in which Oz (and the camera) does a 360 spin, entranced by the new land he has discovered—the picture blurs, the stereoscopic effect disappears, and all one takes in is a nauseating splash of color.