Politicos In Cars Getting Coffee

Feature: The race for the most luxurious sports car in The Swamp

It's early Saturday morning outside Katie's Coffee House in Great Falls, Virginia, where about 400 car enthusiasts from Maryland, Northern Virginia, and Washington, D.C., have rolled out to the parking lot for Cars and Coffee—their weekly chance to gawk at the metro area's finest classic and exotic cars.

The show begins at 6:00 a.m. and runs until 9:00 a.m., but car show devotees compete for parking spots as early as possible.

Katie's owner Mike Kearney has been hosting the event for local car enthusiasts every Saturday in the spring, summer, and early fall since April 2010. But in the past few years, Cars and Coffee has become an outsized spectacle.

"We got here at 5:40, so I think we're done," a woman in a Nike visor yells across the parking lot to a man opening the driver-side door of his Ferrari.

When I approach the man, now turning the key to start his Ferrari, I notice the bags under his eyes. He's parked almost directly in front of the Katie's patio. This is the main thoroughfare today for coffee drinkers and car lovers—prime real estate for someone who desperately wants to get noticed.

I ask him if he had to get here early to nab such a great spot.

"If you start getting there at 5:15, there's people already there who have been camping out since way earlier," he says. "The earliest I ever got here was 4:00."

You're dedicated, I say.

"Well, I'm never the first one here," he says. "But this guy named Dave Trader—he once got here at 3:06. He's always, always here before everyone else."

The old man leans out of his car and chuckles: "Too bad he's not here today."

As he drives away, I read his license plate: IRONHRS. I wonder if that stands for "Iron Horse" or "Iron Hearse."

A few minutes later, an identical Ferrari takes his spot.

The last time I came to Cars and Coffee was in August 2016. A friend and I borrowed his dad's 2001 Porsche Boxster and raced twenty minutes out from McLean down the winding Great Falls roads. When we arrived at Katie's and saw the parade of Ferraris, Maseratis, and Lamborghinis, my friend became embarrassed. 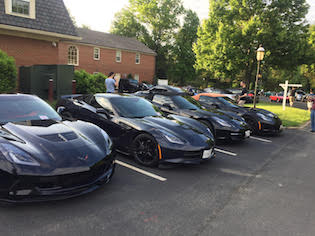 "This car isn't good enough to be seen here," he said.

So we parked far away from all the action, in one of the Katie's shopping center's back lots.

Now, as I'm browsing these same back lots nearly two years later, I see how much the event has grown. A line of six Corvettes — all models from the early 2000s — are lined up in a gauntlet of American manufacturing ignominy.

A man clad in a salmon shirt, blue shorts, and brown Sperrys taps the ash off his cigar.

"End of an era," he sighs, examining the Corvettes.

He introduces himself as Bill. In the early morning light, his tanned and veiny legs seem accustomed to this kind of pre-breakfast tobacco stroll.

"It's a breakfast cigar," Bill says. "I have breakfast, lunch, and dinner cigars."

"No, not every day. In fact, since I retired, my wife has really gotten mad at me because I spend all my time out in my garage with my cars," he says. "So now I'm smoking almost every day. I didn't used to do this. It used to be a weekend thing. But I say hey, I'm 66—what the hell."

Not everyone at Cars and Coffee is an old man longing for sexy sports cars. There are plenty of young gearheads running around, too, geeking out over Audis, Mercedes Benzs, and other assorted specimens of German engineering.

Sometimes, the young clash with the old.

The last time I was here, a middle-aged woman driving a 380 SL Mercedes Benz backed into a parked red Ferrari 458 speciale headlight inset in the car's hood. Both cars' alarms went wild. The woman's back bumper wouldn't dislodge from the low-set Ferrari's hood. Her husband looked worried. Her two sons in the backseat watched in horror as the the sports car's hood began to scratch and crumple.

The car alarms attracted a horde of curious people armed with smartphones to film the carnage.

The owner of the Ferrari, a younger guy wearing athletic shorts and a blue t-shirt, ran over to the embarrassed family, who were getting out of their Mercedes to assess the damage.

"Are you serious? Are you f—ing serious?" he said. "This is the dumbest thing I've ever seen."

But it's not the dumbest thing that ever happened at Cars and Coffee. That prize goes to Josef Tosovsky, the 65-year-old man who just a few months before, on April 16, 2016, totalled his 2007 Ferrari just after he left the event.

According to Fairfax County police reports, Tosovsky had been joyriding at high speeds down the serpentine Georgetown Pike when he unexpectedly came up behind a car waiting to make a left turn onto Towlston Road. Attempting to avoid a rear-end collision, Tosovsky swerved into the left lane and struck an 2005 Acura RSX head-on. The Acura slid off the road into a telephone pole.

But Tosovsky's careening adventure wasn't finished. The Ferrari kept speeding forward and slammed into a 2008 BMW, also in the left lane. It continued spinning out of control until a collision with an International Harvester tractor trailer that was towing a large construction vehicle in the left lane totalled the Ferrari completely.

Three people ended up in the hospital with minor injuries, and Tosovsky was charged with reckless driving.

But accidents like these happen all the time in Northern Virginia — and not just around the Katie's scene. This past April, a driver sliced his Lamborghini in half as he rammed into a telephone pole at high speeds just outside Tysons Corner. Granted, it was night. No one was hurt, but the car (or was it two cars at this point?) will never roll up on Coastal Flats again.

As I'm preparing to leave Katie's today, I wonder if arrogance feeds recklessness. Cars and Coffee began as an informal morning gathering of car lovers—like they do out in California—but like everything else in D.C., it has become a competition.

I walk back out front to the two spots directly in front of the entrance to the coffee shop. These are the top spots on the lot. Split by a crosswalk and in the very heart of Cars and Coffee, whoever parks here dominates over the morning's action simply by being most visible.

Lamborghini Gallardos fill both spots. The one on the right is an orange convertible, the one on the left a tricked-out black coupe. 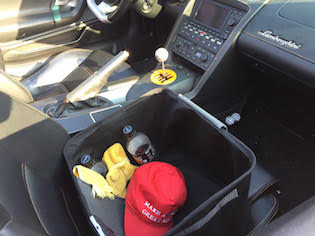 I peer into the console of the orange one and see a Make America Great Again hat. A man in a linen coat comes up and glances into the car.

As he storms away in linened discontent, the owner of the other Lambo, the luxury real estate agent Saad Jamil, bursts out of Katie's. He looks to be in his 30s, wears a driving jacket, and his eyes gleam with excitement. He's talking a mile a minute, explaining all the sweet new modifications he just slapped on his car.

"Where'd you get it tinted?" his friend asks him.

"Actually it came like that," Jamil says. "I already got a ticket on it. The cop pulled me over. It's a 20 percent tint."

"Hey, I don't have front plates," Jamil says. "And he pulled me over when I was speeding. He tested it. There's a ticket."

His other friend, sitting in the car, revs the engine: "Yo, this s—t is badass."

"Hey, when did you get here this morning?" I ask.

Jamil stares at me.

"Hey man, this is a race. You gotta race for this prime real estate!"