Review: Othello, directed by Ron Daniels, at the Shakespeare Theatre in Washington D.C. through April 2

The ancient Greeks, that cheerful bunch, had a saying that you can count no man truly happy until he is dead. The gods may grant a man many years of good fortune, only to tear it all up by the roots in an hour. Of the happy men who live, we can say only that they are lucky, for now. This is how jealousy works its wicked magic in Ron Daniels’ Othello: no woman can be proven faithful until she is dead.

It is remarkable, in this timely and provocative production now playing at the Shakespeare Theatre, how easy it is to make a man come undone. What Othello desperately wants, once Iago introduces him to the possibility that Desdemona might stray, is evidence of his wife’s infidelity. He does not pursue proof of her innocence. After all, how could he prove a negative?

The emotional truth of this Othello is what makes this production so interesting. But Daniels has injected another thought-provoking element into the play. Faran Tahir, a Pakistani Muslim, plays the Moorish General, a part usually played by a black actor. Even the fact of his casting has political implications. Tahir has lamented the limited availability of roles for brown-skinned actors in Hollywood. A look at his resume reveals why: you might know Tahir from his role as a terrorist on 24, or a serial killer who is also a terrorist on Criminal Minds, or from when he played a supervillain terrorist in Iron Man.

Watching his commanding, magnetic, and deeply tragic performance as Othello, it is clear that he has been underused. And this is a much better-looking production than we have seen from the Shakespeare Theatre in a while: they have a bad habit of building huge elaborate sets that swallow up the actors. Here, the back panels are gone, and there even seems to be a thrust inserted that puts the action deeper into the audience.

In Daniels’ production, Cyprus, where most of the action of the play takes place, is a Muslim country uneasily occupied by Venice. When Desdemona (Ryman Sneed) and Emilia (Merritt Janson) arrive on the island, they are wearing hijabs, and the only local we see, Bianca, is veiled. Daniels inserts a scene in which a group of (all white) Venetian soldiers stand and listen to the muezzin’s call to prayer, their eyes wide, amazed and even afraid. The Venetians are overwhelmed by the foreignness of Cyprus, and, huddled in their bunkers, constantly standing guard, they look as if they are under siege.

This emphasis reveals a tension in the play: when we begin the play Othello is a Moor surrounded by Venetians, but is deft at navigating their prejudices and differences. In Cyprus, the Venetians are the outsiders in a Moorish country, and they do not handle it well. It heightens their separation from Othello: it is his otherness that surrounds them in Cyprus. 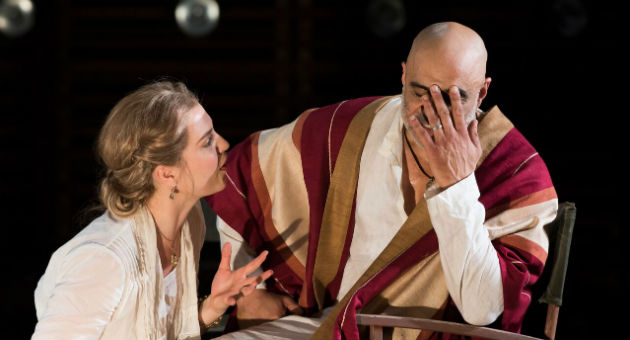 Faran Tahir as Othello and Ryman Sneed as Desdemona in the Shakespeare Theatre Company’s production of Othello, directed by Ron Daniels / Scott Suchman

After intermission, Othello changes from his military uniform to long, white robes. He now has a curved scimitar, not a Venetian straight sword. As he becomes more jealous of Desdemona, and starts to hate his comrades (and they him), he becomes more and more isolated from his peers.

Daniels and Tahir make strong, story-based choices about the ambiguities of the play, and then magnify them. Textually, Othello’s race and religion are unclear. For Shakespeare, "Moor" could have meant black or Arab or even Indian. While the word was initially used for the Muslims of the Iberian Peninsula, it was also casually applied to anyone who didn’t look super white. There’s a brief reference in the text to Othello’s baptism, but it comes from the villain Iago, and so it may not even be true.

Tahir plays Othello as a Muslim who has converted to Christianity, but it is implied that he returns to some form of Islam by the end of the play. Through this lens, the death of Desdemona becomes an honor killing, or as Othello describes it, "an honorable murder."

It seems astonishing, at a time where the frontrunner for the GOP nomination wants to ban Muslims from entering the country, while the frontrunners for the Democratic party shy away from speaking about Islamic extremism, that a mainstream theater in liberal D.C. is putting on a play where a brown-skinned Muslim man elopes with a white Christian woman and murders her.

But it is more complex than fear-stroking: We begin by thinking Othello’s vices are foreign to the Venetians, but they clearly are not.

The play shows Iago (Jonno Roberts) being driven by the same passions as Othello. Roberts does not look like the greasy twisted villain one can imagine in the text. Roberts is tall and strong and beefy, with a big lantern jaw and enormous hands—he reminds me of Ted Hughes. He looks much younger than Othello, but he’s just as virile, and just as terrified of his wife.

This Iago is no perfect plotter. He seems to be making it up as he goes. When his first plot comes off (he gets Cassio fired for drunkenness), this Iago watches Cassio wail with something like wonder. Look at what I made! These powers are new to him. 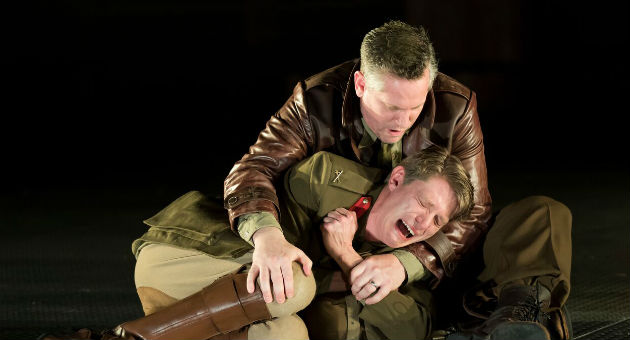 Patrick Vaill as Cassio and Jonno Roberts as Iago in the Shakespeare Theatre Company’s production of Othello, directed by Ron Daniels / Scott Suchman

In this version, Iago’s jealousy seems to have some foundation. It is implied that Othello has, in fact, slept with Iago’s wife Emilia: in one scene, Othello shoves money in her hand as he brushes by her, and her shamefaced reaction suggests that, while they may have had an affair, he now considers whatever happened between them to be prostitution.

This insertion implies that Othello’s paranoia comes from his knowledge of his own infidelity. If he can sleep with someone else and hide it, why couldn’t his wife? In this play, the maggot of suspicion burrows in and lays eggs in the brain and breeds. All Iago has to do to drive Othello out of his mind with jealousy is to point at Desdemona speaking to another man and say, "I like not that." One imagines that he once looked at Emilia and thought the same thing.

Both twisted men are humanized and undone by their tortured understanding of their wives’ sexuality. You notice, in fact, that every woman in Othello is called a whore at least once. The accusation comes from Venetian, Moor, and Florentine. It is a cross-cultural sickness. Of course, in this play, women hate other women too. Emilia betrays Desdemona to try and win back her husband’s affection, and she treats Bianca nearly as bad as the men do. But Iago kills her just as she tries to right these wrongs, revealing him for the villain that he is.

Although Othello is sad that he has killed Desdemona, he never really repents. Before killing himself he tells the men to speak of him as "one that loved not wisely but too well." It’s not my fault—if she had really cheated on me, killing her would have been just. While Tahir gives us Othello’s breakdown beautifully, we see that his Othello learns nothing. He does not kill himself for any love of Desdemona, he simply honor-kills himself.

In Daniels’ production, sexual paranoia is a passion that transcends and feeds upon racial and religious hatred. Othello is one of Shakespeare’s darkest plays: we get no catharsis after tragedy; evil is not conquered, and virtue not rewarded. The play teaches that when the wild beast of jealousy comes, it is fundamentally unsatisfying to look for proof to beat it away. One can only trust, and insist on trusting. But Shakespeare shows us that, for Desdemona, trust is as vital as it is deadly.