A senior editor at the New York Times became embroiled in a testy back-and-forth exchange with a Jewish pro-Israel reader of the publication, who had criticized it for launching a website aimed at tracking how Jewish lawmakers are voting on the Iranian nuclear deal, according to emails obtained by the Washington Free Beacon.

The Times’ "Jew tracker" was described as anti-Semitic and offensive by pro-Israel officials who slammed the paper for feeding into stereotypes about Jewish power and money.

The controversial chart listed all lawmakers who voted against the nuclear deal and highlighted in yellow whether or not that person was Jewish. The chart also included the number of Jewish persons living in each lawmaker’s district.

Following a report by the Free Beacon on the tracker, the New York Times altered the site by removing the column identifying members as Jewish. The paper also edited the report to remove overt references to the relationship between each lawmaker’s religion and his position on the Iran deal.

Despite altering the website to address the material critics viewed as offensive, a senior New York Times editor praised the tracker and fought back against one Jewish critic who had written to express outrage over the post.

"Are you so ignorant that you don't understand the historical significance of what you're doing?  Are you so tone deaf? Why don’t you include addresses so that people’s homes can be attacked?" wrote the reader, who requested anonymity, to Greg Brock, a senior Times editor.

"My parents were Holocaust survivors and the first thing the Nazis wanted to know is: where are the Jews?  This merely furthers the classic anti-Semitic trope of dual loyalty," the reader added.

In a response, Brock defended and praised the tracker, saying he wished the Times has published it "sooner."

"I’m not going to get into the gutter with you with name calling and saying your email is ‘stupid’—as you said of us," Brock wrote. "But it would be helpful if you did your homework. You’ll find that we are in excellent journalistic company. I just wish the Times had thought of it sooner so we do not appear to be copying others."

Brock maintained that Jewish publications, which are written for local Jewish communities, have run similar reports detailing which lawmakers voting for and against the deal are Jewish.

"Do you ever read the Jewish press—some of the finest journalism around, in my humble opinion," the editor argued. "If you search online right now, you will see that these publications have been keeping a running count of the voting position of Jewish senators and representatives for weeks."

"Do you understand that you're creating a hostile environment for Jews whether they agree with the NYTimes editorial position or not?" asked the reader, who further described the post as "stupid" and offensive. 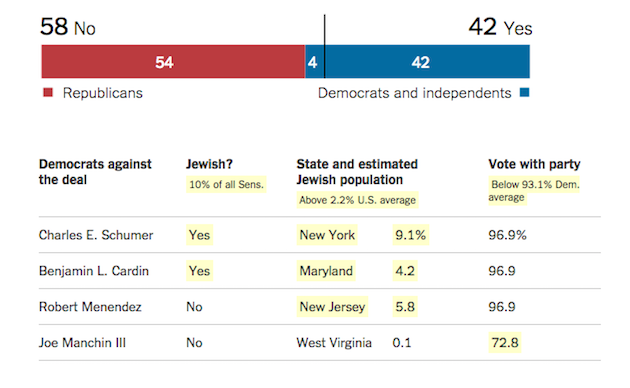 Jewish leaders chastised the Times for feeding into what they called Jewish stereotypes.

"It’s a grotesque insult to the intelligence of the people who voted for and will vote against [the deal]," said Abraham Cooper, associate dean of the Simon Wiesenthal Center, which combats anti-Semitism.

This type of reporting "does a disservice to the issue and that’s the exact opposite job of the New York Times," Cooper said. "They have some explaining to do. Why’d they do it? Shame on the New York Times for the timing and implications of this piece."

After outrage erupted online and elsewhere, the Times’ public editor, Margaret Sullivan, addressed the controversy, praising the Times for altering the "insensitive graphic."

"The graphic, as almost everyone now seems to agree, was insensitive and inappropriate," she wrote. "I would add that it was regrettably tone-deaf. It shouldn’t have appeared in that form to begin with. Given that it did, Times editors took the right action in listening to the objections and changing it.