It’s possible that I could enjoy a big campy drag musical version of The Taming of the Shrew, if the divas could sing. I’m not ruling it out.

But in Ed Sylvanus Iskandar’s all-male Shrew, now playing at D.C.’s Shakespeare Theater, the principals can’t hit the high notes, the text is shredded, and Shakespeare’s dark and complicated story of love, sex, and power is largely ignored in favor of cheap tricks and shallow commentary on the performative nature of gender roles. You see, this is a play about a mean man breaking a spirited woman, and making her behave, and so it is very problematic.

That’s why the women parts are played by drag queens. (Get it? Gender is performative.) It’s why the male characters wear 1950’s suits fitted with exaggerated codpieces (GET IT? GENDER IS PERFORMATIVE.) And, in case you were asleep during the first half, the second act includes a song that goes something like, "Play your part and never stray/Like a wise man said/All the world’s a stage!" (GENNNNNDER ROLES ARE PERFORMATIVE!!!)

Some of the songs (written by Duncan Sheik, who wrote Spring Awakening) are catchy if you imagine what they’d sound like performed by someone who could belt. But effort of this kind takes a toll on the audience. At one point, the elderly lady behind me cried out, "Oh, not another song!"

But there was always another song.

Tackiness aside, the worst part about this show is that, when you ignore all of the gaudy clutter and schtick, there’s a neglected, talented cast of Shakespearean actors at work.

Katerina and Petruchio (the Shrew and her Tamer) have strong chemistry, and I wish I had been able to watch them do the play. Maulik Pancholy (better known as Jack Donaghy’s assistant Jonathan on 30 Rock) is a sharp and intimidating Kate, but he’s also appropriately vulnerable for someone as lonely and angry as she clearly is. I also love Kate’s amazing black boots and his (her?) Bonnie and Clyde beret. 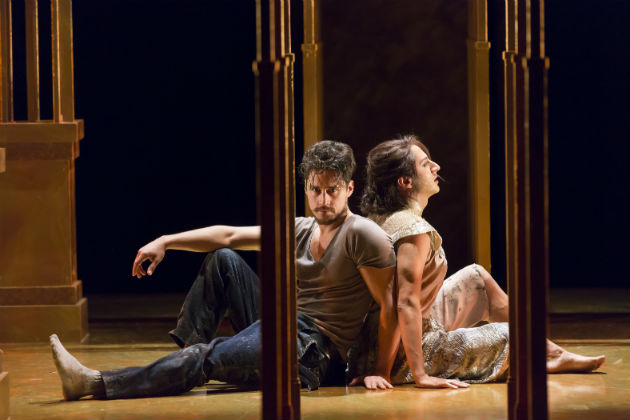 In fact, all of Kate and Bianca’s costumes are marvelous. One might say that this production excels at the superficial. It implies that Katerina is a Shrew because she’s jealous of her pretty sister (played by Oliver Thornton, a towering vision from a Fellini film, in cat-eyed sunglasses and glittering high heels). Surely that’s too retrograde of an interpretation for a production trying so hard to be daring.

Kate’s wrath manifests itself on her suitors, whose approaches are met with a broken lute to the head. One might think that the scene where Kate binds Bianca’s hands and grills her about whether she’s in love with any of her idiot suitors is some sort of weird S&M interpolation, but it’s actually in the text.

Although this approach is a bit extreme, Kate is right to hold the weak and silly men of her city in contempt. Bianca’s insipid suitors, Hortensio (Tom Story) and Gremio (Andre De Shields, inexplicably dressed like a cardinal) are hammy and hilarious, but wholly unfit for marriage. Eventually, both Kate and Bianca end up with foreigners. Who knows what toads the sisters would have been wedded to if the older sister had been more mild and gentle?

By preventing Bianca from marrying early, Katerina’s shrewishness ensures Bianca ends up with Lucentio (Telly Leung, the best singer in the cast), who is young, handsome, rich, and a student of philosophy (not bad, eh?).

Kate might not be so lucky in her match. Peter Gadiot’s brawling, uncouth Petruchio starts out appealing. He is mocking rather than menacing, and he has a winning tendency to drape himself in a sultry manner upon any surface or human being he can find.

Their courtship scene, in which each ratchets up insult and innuendo until it looks like real affection, is very fun to watch. But Pancholy’s Kate gives in far too easily. In other productions, Kate is dragged kicking and screaming to the altar. Here, after one meeting she gives her hand willingly. She’s a sucker for the first man to tell her she’s pretty.

After their wedding, Petruchio’s resistance to Kate’s surliness becomes an overwhelming insistence on total mastery of her mind and body. He humiliates her, starves her, and doesn’t let her sleep until she becomes not just well mannered but wholly passive and subservient.

In this show, Katerina seems taken by surprise—she thought she was marrying someone who could keep up with her, not someone who would attempt—and succeed—to scourge all the fight out of her.

The play ends with Katerina and Petruchio returning to Padua for her sister’s wedding, where she makes a long speech about the weakness and powerlessness of women. "Then vail your stomachs, for it is no boot / And place your hands below your husband's foot," she tells her fellow wives. She literally kneels down and holds out her hand to get stepped on.

Many productions refuse to take Kate’s words at face value. They want to believe that, behind the scenes, Kate and Petruchio have secretly fallen in love, that she must seem demure to the world but that at home she’ll have some autonomy. But this is far too easy. A clear-eyed audience must take her total abasement seriously before looking for a way to feel content with the ending. 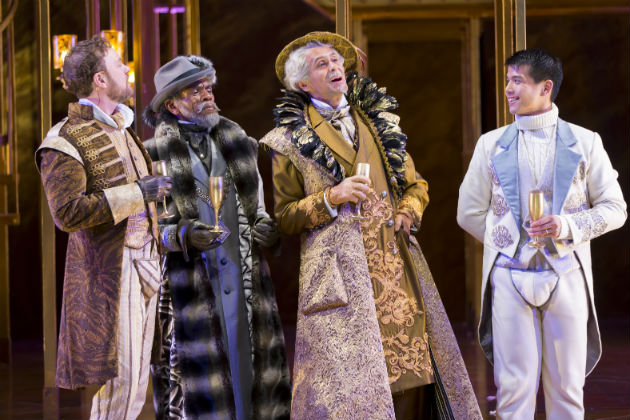 The current political climate demands that productions of The Taming of the Shrew come down clearly on one side or the other: either this is a misogynistic play and we are meant to laugh and applaud at the breaking of a woman’s spirit, and this is Very Bad. Others want to make it a feminist play, where Petruchio and Kate become a team, subversively lampooning the oppressed state of womankind.

Why must it be either? Shakespeare’s plays thrive on such ambiguities. But no matter where Iskander comes down on the question, his most obvious theme is that his audience is stupid. About 30 to 40 percent of the show is cut out, shoved aside by dance numbers and no fewer than three (!) subplots artificially introduced into Shakespeare’s already crowded story.

If a director wants to dive into issues about men and women and marriage, this play is a good place to start. Instead of dealing with those issues by looking for them in the text, Iskander uses a bunch of unsubtle devices to point to exaggerated examples of manliness and womanliness without saying anything else about either of them. Don’t people who like this sort of thing already agree that gendered qualities are artificial? Is he saying anything challenging or shocking?

To Iskander’ credit, Katerina’s powerful last speech is not delivered ironically, and it makes the audience very uncomfortable. It’s the only time we are truly uncomfortable. Turns out that this production, which tries so hard to be shocking, is only provocative or interesting when it takes Shakespeare seriously.

But then Iskander ruins it. After the speech, Katerina sheds her mousy-wifey dress to reveal she’s wearing leather pirate pants, and she and her husband embrace. The audience eats it up; a happy ending that erases any thought-provoking moments the play had managed to produce.

"Who was it that said Wagner has great moments but awful quarters of an hour?" asked my friend as we left the theater. That about sums it up.