Macbeth is a faithful reworking of Shakespeare’s masterwork, textually: condensed a bit, but the broad strokes are all accounted for. You’ve probably never seen The Scottish Play done quite like this, however. Director Justin Kurzel and cinematographer Adam Arkapaw have crafted a boldly impressionistic adaptation of Macbeth, one that relies on color and film speeds to get the mood across as much as acting or dialogue.

Macbeth (Michael Fassbender) is a thane of Scotland and one of King Duncan’s (David Thewlis) greatest warriors. As the film begins, Macbeth is leading the king’s army against a band of renegades: He kills them, decapitates their leader, and is about to enjoy his victory when a coven of witches informs him that he will soon be king. After telling Lady Macbeth (Marion Cotillard) of this prophecy, she demands that he take action to see it come to fruition.

In the original Red Wedding, the duo kill their king while he stays as a guest at their home and then, after Macbeth ascends to the throne, begin killing, well, everyone else. Friends, allies, nobles, their wives and children and servants even. Then, finally, the last part of the weird sisters’ prophecy comes true, as Macbeth is killed by a man not born of woman. Fin.

The story itself is engrossing, of course, as most plays that have endured for centuries tend to be. And the performances are about as grand as you’d imagine from a cast headlined by Oscar and BAFTA-credentialed actors such as Fassbender and Cotillard.

More interesting, though, is the way the film is shot. The opening battle cuts back and forth between wide establishing shots unspooled in slow motion and in near-silence, and close-up shots in normal speed surrounded by the clash and clatter of battle. The occasional shot of Macbeth standing still and staring into the distance—at the leaders of the opposition, at three witchy figures—as violent death swirls around him contrasts with the muddy, bloody chaos in which he is taking part. We get both the fog of war and the clarity of the combat—a heightened sense of things.

As the battle rages, Macbeth catches glimpses of the Weird Sisters, shrouded in a greenish-yellow fog. It is markedly different from the blue-grey filter through which we have seen Scotland thus far. The alteration in color palette—along with the fact that he stops, stone still as murder swirls about him—suggests it is a vision, possibly supernatural. We see such color shifts occasionally, as when the final battle commences and the screen burns red, the loch resembling a fire-soaked hellscape.

Kurzel’s Macbeth is visually arresting, almost provocatively so. I can’t wait to see what this talented director can do when he gets his hands on some decent source material. I guess we’ll soon see, given his next project: an adaptation of the video game series Assassin’s Creed. 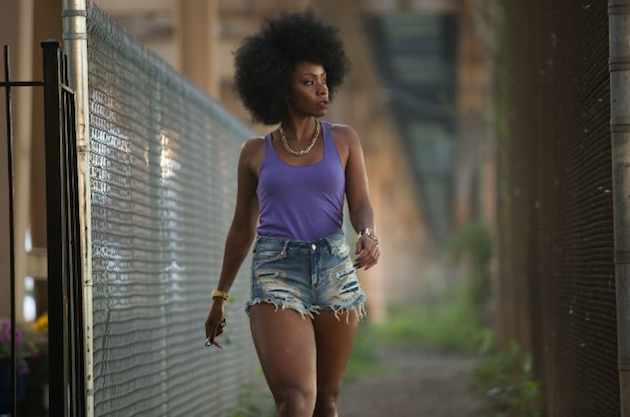 Chi-Raq is Spike Lee’s retelling of Aristophanes’ Lysistrata, the 2,400-year-old play in which the women of Greece refuse to have sex with the men of Greece until the men of Greece stop killing each other for no good reason. Lee has transported the action from Athens to Chicago, where feuding gangs have caused more than 2,800 shooting victims this year alone.

Sickened by the sight of a dead child after she herself was involved in a pair of shootings, Lysistrata (Teyonah Parris) convenes a council: no more sex until the men of her town give up the fighting for good. The decision doesn’t just stress out her boyfriend (and gang leader/rapper) Chi-Raq (Nick Cannon) and his rival Cyclops (Wesley Snipes); it sets off a chain reaction leading to peace—and full employment—around the globe.

I’ve always found Lee to be at his most entertaining when he’s attacking a subject like a teen who has been taken off his ADHD meds and been given an Avid editing suite, a style that reached its peak in Bamboozled and, to a lesser extent, was present in Do the Right Thing. Chi-Raq is frenetic, throwing together dance numbers and shootouts, preaching and poetry. It suffers a bit from lack of focus, but a diffuse approach also serves Lee’s purposes here: he’s going after gangs and the NRA and inner-city joblessness and military intervention abroad and hopelessness at home. Lee’s critique is systemic, his cry anguished. If it’s not entirely coherent—and if Lee never articulates a real solution to the problem—well, that’s okay. Some problems have no obvious answer.

The venerated black filmmaker has come under fire from certain quadrants of the political left for making a movie about inner city violence that focuses less on police brutality than the brutality of those who have turned Chicago into a more dangerous place for Americans than (as a title card informs us) Iraq or Afghanistan. The general critique is that it’s an "all lives matter" film for a "black lives matter" moment. If you’re leveling such an argument—or if you think that police shootings must be focused on to the exclusion of all other violence, or if you think that "all lives matter" is a pejorative demonstrating hopeless bigotry—you’re probably part of the problem that Lee has no idea how to fix.

Chi-Raq’s biggest strength is its performances. The actors hold Lee’s vision together through sheer force of will. Parris lights up the screen, exuding a sort of forceful charisma that makes the millennia-old scheme seem slightly plausible, while Cannon brings an understated pathos to the titular gangbanger. Angela Bassett and Steve Harris head up Aristophanes’ original groups of old women and men, respectively, bringing energy and humor and urgency to the roles. And, of course, there’s Samuel L. Jackson, delivering lines as lyrics whilst dressed as a pimp.

Chi-Raq may not be the most coherent critique of inner city violence or even the best film about race relations hitting theaters this winter—that honor goes to Quentin Tarantino’s The Hateful Eight, a movie likely to enrage and outrage all manner of people when it hits theaters in a few weeks—but it is Lee’s most vital work in years.