Ammo Review: At least as good as other American made brass, and a portion of the proceeds go to charity

Former Navy SEAL and Lone Survivor author Marcus Luttrell has put his name on a line of ammunition.

Luttrell’s Team Never Quit partnered with PNW Arms and Sinterfire to roll out frangible, lead-free ammo in a wide variety of calibers.

"The team is committed to a reliable product, no matter what," Luttrell said. "Team Never Quit came about because we knew that our way of life has motivated others in a positive way. We want to motivate others to overcome challenges and never quit."

"We are not trying to reinvent something, we are trying to make it better." 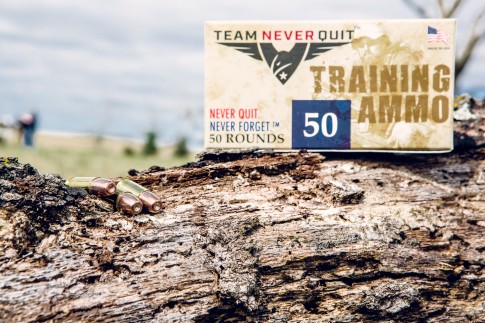 Luttrell was a member of a Navy SEAL reconnaissance team surveying Taliban movements in the Hindu Kush mountain region of Afghanistan during a June 2005 mission. All three of his SEAL teammates and 16 additional special operations personnel attempting to aid Luttrell’s team were killed after they were discovered by hundreds of Taliban fighters.

Luttrell was awarded the Navy Cross for combat heroism as a result of the engagement. His account of the ordeal—Lone Survivor—became a New York Times bestseller, and was later adapted into a film of the same name in 2014.

Lucky Gunner, which will be distributing the Team Never Quit ammo, provided me with a sample of .45 ACP training rounds and hollow points. I was able to run them through my Remington R1 Enhanced 1911 even though the Free Beacon’s Bill McMorris earlier almost blew up the gun by accidentally loading the wrong caliber of ammunition into the magazine. Over 120 rounds ran clean and smooth, without misfires, double feeds, failures to feed, or any other problem.

On this limited inspection, the Team Never Quit ammo fires just as well as Winchester, Federal, CCI, and other leading manufacturers. And the fact that Luttrell’s ammo is frangible and disintegrates on contact with a hard surface may give it a leg up on the competition.

As Luttrell explains in a promotional video, the importance of frangible ammunition was cemented in his mind after a friend of his was injured after a piece of a non-frangible round bounced off a steel plate he was training with and hit him in the groin.

You’ll pay a bit more for the frangible ammunition. A hundred rounds of training .45 ACP and 20 rounds of hollow point cost $95, but Luttrell’s story may be reason enough to pay the difference. The added cost hasn’t hindered sales thus far, according to Luttrell’s partners. "At Lucky Gunner we’ve seen a pretty strong initial response," Lucky Gunner spokesman Anthony Welsch said. "We’re actually sold out of the 9mm training rounds. So, there does seem to be some excitement around the ammo."

And at least some of that extra money will be going to charity.

In 2010, Luttrell established the Lone Survivor Foundation. A portion of the sales of Team Never Quit branded ammunition will go to the charity.

"It’s something that’s really important to me and it does a lot of good for a lot of veterans and their families." 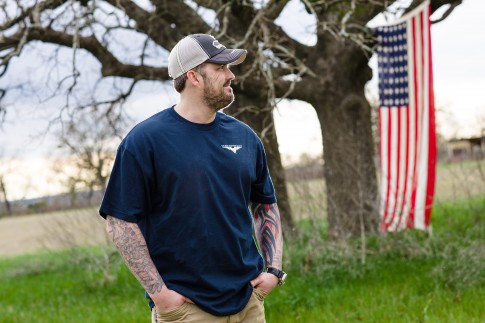