Liberal Activists Praise Head of Planned Parenthood as a ‘Hero’

Cecile Richards expected to step down as president of abortion provider

Liberal activists were quick to heap praise on Cecile Richards after news broke Wednesday that she plans to step down as the president of Planned Parenthood after more than a decade in the post.

BuzzFeed News first reported that Richards, who became president of the Planned Parenthood Federation of America in 2006, is planning to depart the organization sometime this year. Under Richards' leadership, Planned Parenthood increased the number of abortions that it performs annually by nearly 11 percent.

Democratic Rep. Bonnie Watson Coleman (N.J.) was the first elected official to praise Richards' tenure and to wish her well in her future endeavors.

".@CecileRichards, you've always shown up for women and never backed down from a challenge," the lawmaker tweeted. "Your fearlessness, compassion, and resilence [sic] will be missed. I know you and Planned Parenthood will continue to be champions for women and for what's right."

.@CecileRichards, you've always shown up for women and never backed down from a challenge. Your fearlessness, compassion, and resilence will be missed. I know you and Planned Parenthood will continue to be champions for women and for what's right. https://t.co/dXLVYXAeRV

Thanks for all your hard work, @CecileRichards. And this is a great opportunity for @PPFA to expand diversity and inclusion in leadership roles. https://t.co/1CGxZz1yNV

She has been an extraordinary leader in vertiginous times–Cecile Richards Plans To Step Down As President Of Planned Parenthood, After More Than A Decade https://t.co/qokHnLPXzO via @rubycramer

ty to cecile richards for being a badass

It's a testament to Cecile Richards' leadership that despite having control of the White House and both chambers of Congress this year, Republicans still weren't able to defund Planned Parenthood as promised.

Cecile Richards almost didn't go to her job interview with Planned Parenthood 10 years ago. We asked her why + questions about Donald Trump, the #txlege and her proudest moment at @PPact https://t.co/pqq8cNOoh6 @agarciaditta (2016) https://t.co/sCCuikE3wX

.@CecileRichards has been an incredible leader of @PPFa & @PPact fighting for women’s reproductive rights. Every day she demonstrates that standing up and speaking out makes all the difference. I wish her all the best in her next venture.

I’ve always admired her resilience and fortitude and am proud that she’s from my state. I talked to @CecileRichards in 2016 about her proudest moment at @PPact and what’s next for the reproductive health movement: https://t.co/hhh5VE4NfM https://t.co/wIvSIZl1xa 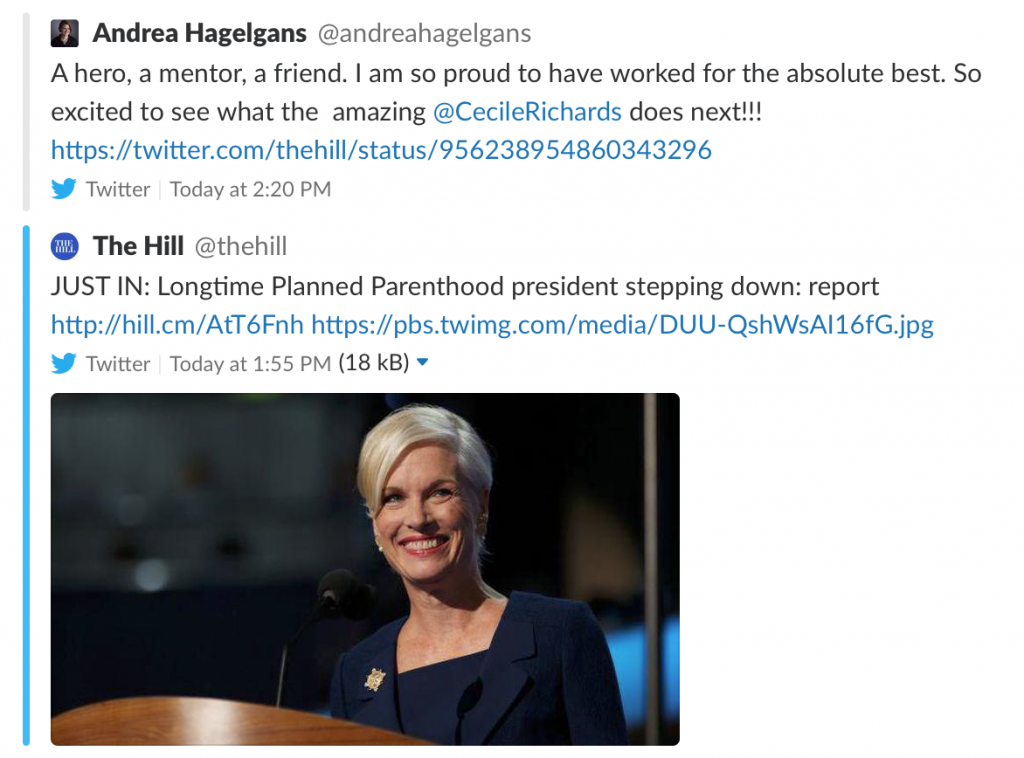 Soon after news of Richards' expected departure broke, many social media users began to speculate about whether she would try to run for political office in the near future. Some activists implored Richards to enter the gubernatorial race in her home state of Texas. Richards' mother, Ann Richards, served as governor of the Lone Star state for one term before she lost her reelection bid to George W. Bush in 1994.

Cecile Richards Plans To Step Down As President Of Planned Parenthood, After More Than A Decade https://t.co/E44auSvgGT#WednesdayWisdom

Thank you @CecileRichards for your invaluable leadership at @PPact in defense of women and health care. And if you ever decide to run for office, I'll drop everything to work on your campaign. #IStandWithPP https://t.co/Scw9MdTmNV via @rubycramer

No confirmation yet from Planned Parenthood that Cecile Richards is stepping down, but I'll say this much: I hope it means she's running for Governor of Texas.

No indication whatsoever that's the reason, but this Texas kid can dream.

The filing deadline to run for statewide office in Texas in 2018 closed on Dec. 11, however, so Richards would be too late to launch a gubernatorial run.