Black Hammer, a small, "anti-colonial communist" organization based largely in Chicago, blends an off-beat Marxist ideology with explicit racial hatred. Despite their limited numbers, recurring Facebook bans, and general disconnection with the rest of the hard left, their commitment to creating a colonized people’s paradise in the Rockies appears unshaken. Although they’re not taken seriously by other activist groups on the left, they take themselves seriously. It’s unclear whether that self-belief will be enough to sustain them in their latest project.

Hammer City, which was announced to widespread mockery on Twitter, will be situated on an undisclosed 200-acre plot in Colorado. The compound will last thousands of years, say the Black Hammers: "After 600 years of struggle against colonialism, genocide, torture, and ecocide, the land is in the hands of The Colonized Working Class."

Surprisingly, the Hammers agreed to an interview with the Washington Free Beacon. In a Zoom call, "Commander in Chief" Gazi and "Secretary General" Anco appear in a small room, flanked by five bodyguard Hammers in matching masks. Gazi and Anco don’t wear masks. Gazi likes to appear on Facebook live rallies with at least two bodyguards looming in the background, but it’s unclear why they’re on our private video call. Gazi refuses to introduce them, and they maintain their silent stance throughout our call. 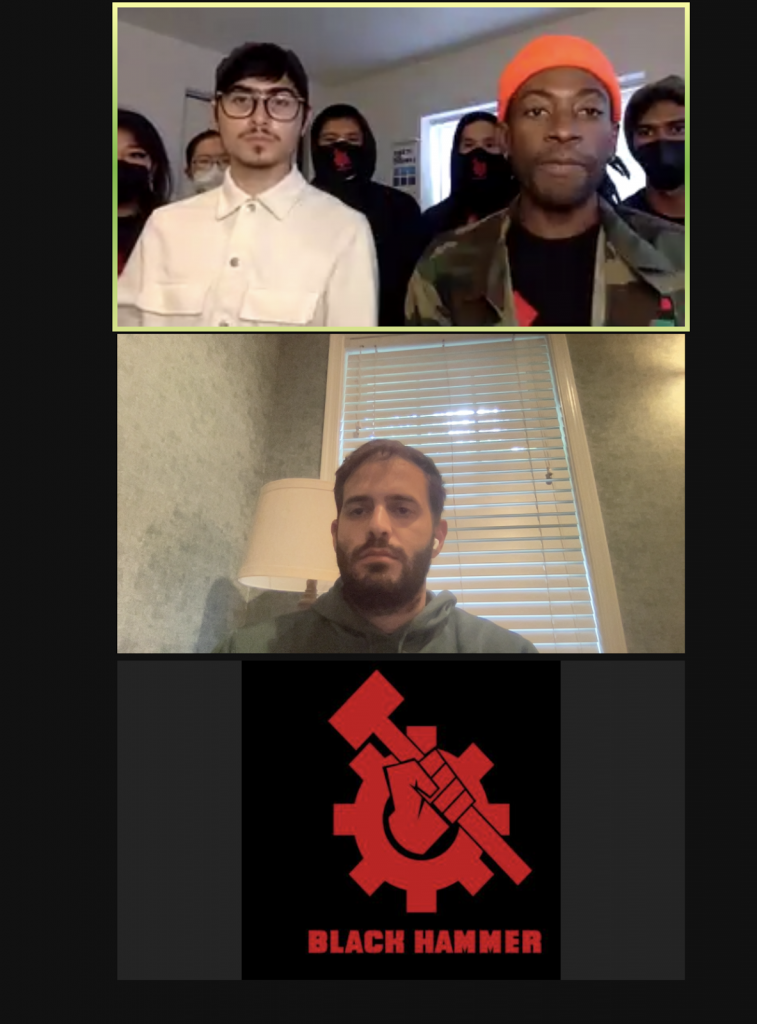 Black Hammer Organization "Commander in Chief" Gazi gets aggravated when you question his planned commune in the Rocky Mountains.

Gazi can’t decide whether to butter me up or call me a cracker. After his "political director" confirms the Free Beacon’s readership tends to be right-leaning, Gazi opens our call with a 10-minute denunciation of the recent "rigged" election, "Barack Obummer," "Kopmalla Harris," and so on. But then I ask about the planned commune, and Gazi gets upset.

"Hammer City was conceptualized by the poor colonized working class," says Anco. The "United Snakes of Amerikkka" is collapsing, they say, and the time is ripe for colonized "dictatorship" over the land.

That land appears to be mountainous, rather rocky scrubland, and outside observers have raised questions about livability. But the Hammers are convinced they will be able to farm enough food and graze sizable herds to feed the commune on one acre (the rest, they say, will be preserved for nature). "White people are so stupid!" says Gazi when I put these doubts to him. "Colonized people can live anywhere on earth, sweetie." 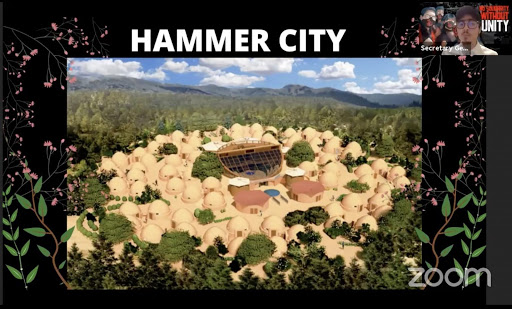 Asking for details about the commune is fraught in part because the Black Hammers don’t appear to have any background in homesteading. A self-described "faggot from Atlanta," Gazi Kodzo is a YouTuber and radio show host who earned the moniker Black Hitler for his aggressively anti-white and anti-Semitic videos. In 2017, he served a short stint as campaign manager for a city council candidate, Eritha "Akilé" Cainion, in St. Petersburg, Florida. Cainion ran on an aggressive reparations platform that included "restoring" large swaths of St. Petersburg to a "vibrant black community." But with the Hammers, Gazi seems to have found a long-term home for his particular brand of political performance.

The bodyguard roleplaying is a testament to Gazi’s remarkable hold over the group. The Hammers as an organization take after their leader: simultaneously vampy, brooding, and obsessed with the haters. In Facebook rallies, Gazi gets a splashy drumroll intro before bursting into the shot with two bodyguards, one holding a hammer (there is a conspicuous lack of guns in Hammer public displays). "Land back!" he cries. All Hammer speeches, from Gazi on down, begin with this phrase, a quasi-religious invocation.

Gazi’s speeches are hyperfocused on the criticism Hammers have received over the preceding week. Typically, the targets are white "colonizer" liberals and "ku klux kkkomunists." As Gazi emphasizes on Twitter, "If y’all were communists, you’d be back in europe, not on stolen land doing the work of the devil day in and day out." He adds a tea-sipping gif.

But these days, focus has shifted to building anti-colonial power in the Rockies. As part of their outreach program, the Hammers are papering the South Side of Chicago with flyers urging residents to pick up and move to Hammer City. Gazi refuses to say how many people are in the Hammers. He claims there are 100 members of the governing cadre, representing Turtle Island (North America), Pachamama (South America), and the other four inhabited continents, and that there are far more rank and file members. Hammers representatives refuse to verify these statements, or claims that there are Stanford, Harvard, and MIT-educated Hammers, or that researchers from "major universities" have verified the high quality of Hammer City’s soil.

Then we get into the Hammers’ racial politics, where no white person is left off the hook. Gazi has made the phrase "Fuck Anne Frank" a key attention generator in online videos. I ask about Frank, the Jewish girl whose diary captured some of the horrors of the Holocaust, toward the end of our conversation. Gazi describes her as an "Easy-Bake Oven little heifer." Gazi and Anco then spend several minutes viciously denouncing Frank for benefiting from white supremacy. To them, she’s a symbol of all the energy devoted toward white victims while ignoring colonized suffering. It’s the most worked up they’ve been on the call. The Hammers are quite clear: "all bleach demons are to blame for the current destruction of the world."

The aggressive and explicit commitment to being "anti-white" has left the Hammers with few friends on the radical left. Gazi was kicked out of the African Peoples’ Socialist Party, and the Hammers regularly go after the BLM movement for being filled with whites.

There are no "colonizers" in the Hammers, although white people can apply to join the Reparations Corps, a class that will help "wash the blood off your hands." There are varying levels, complete with group discounts: You can begin your journey with the "Che" and "Sankara" levels, or complete a full eight-week "Mao" level Zoom course for $199 and get a sweet uniform to boot.

Mostly because of their rabid racism, the Hammers have trouble describing their ideological underpinnings. Sometimes they refer to themselves as a Maoist organization, sometimes as communist. But they also say things like, "Marx didn’t contribute anything to society." In our interview, Anco explains fervently that "we do not believe in race science! We are dialectical materialists!"

On May 21, the sheriff's office of southwestern Colorado's San Miguel County posted an odd Facebook status. "Deputies responded Monday evening to a trespass report on a property south of Norwood where a group of 8-12 people from the ‘Black Hammer Organization' were camping prior to a property purchase that ultimately did not occur. When Deputies arrived, they advised the group of the trespass, and they left the area without incident…. There have been no reports that the group has since been seen in the area."