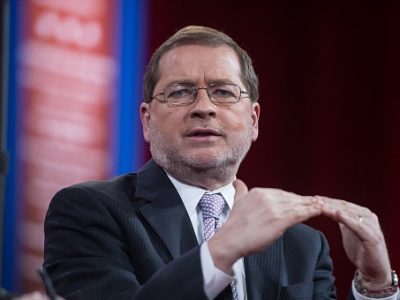 Grover Norquist: Hillary Clinton Being Wrong on Guns and Fracking Could Cost Her the General

When conservative anti-tax crusader Grover Norquist announced he was going to this year’s Burning Man—the annual counter-culture art festival in the middle of the Nevada desert—it caused considerable consternation among some self-righteous progressives.

The Washington Free Beacon caught up with Norquist to talk about being a conservative burner, spontaneous order, and people who cook bacon while naked.

[Note: This interview has been edited for length and clarity.]

FREE BEACON: So, how’d you end up at Burning Man?

GROVER NORQUIST: Well, I had talked to [Burning Man founder] Larry Harvey a few years ago. I couldn’t make it that year because the Republican National Convention was the same week. This year worked, so my wife and I packed up and left the kids at home. It was just interesting on a whole series of levels.

There was chatter from some left-of-center people when I tweeted out that I was going. It bounced around and lefties pronounced themselves outraged that a free market, small government conservative was going to this so-called "counter-culture" event. It was an odd reaction, and it was knocked down by the founders and organizers. One of the 10 principles of Burning Man is radical inclusion.

One of the other principles is radical self-reliance. Everybody brings their own stuff. People self-police and self-organize. The king doesn’t tell you what to do. Talk about Hayek’s spontaneous order! You’ve seen the Woodstock movie? Remember when all the food has to be trucked in to feed the hippies? There’s none of that.

Nobody arrests you if you drop something on the ground, but everyone picks up after themselves and cleans up scraps that get blown around. I carried around a little plastic bag to pick up things.

I thought it was going to be kind of bohemian, artsy, people who didn’t want to work. But you go to Burning Man and look at the art those people put together. People made cars look like a cat or a big spider. Took busses and flatbed trucks and made them look like pirate ships. These people built cool stuff.

They had one huge piece that was two upper torsos coming out of the desert. It was called Embrace. Three stories tall at least. I went up inside. It was substantial. Two years of work from start to finish it, three weeks to assemble it in the desert. Dozens of people worked on it. And they had one that was a temple. It looked like that big temple in India. It was beautiful. People went inside and put up pictures of the people they had lost in the last year, notes to people they lost. It was a work of participatory art. And then they burned it.

What I did wrong first time out is I misunderstood the gifting economy. I thought it was more like bartering. But gifting is different. There was one young man who had carabiners with lip balm on them, and he would go attach them to people’s backpacks when they weren’t looking. So it was Maimonides’ second level of charity.

FB: What did you bring to gift?

GN: I gifted Cuban cigars because I wanted something someone would really like, and because they’re Cuban, they’re illegal and kind of edgy. It’s Burning Man after all.

I was in the procession that marched out to light the man. The woman who lit it was named Crimson—that was her real name, not her Playa name. She always lights the man. Certain people have had these duties for a long time. There’s a lot of tradition. They also had 20 different groups of fire dancers, and they were all doing different things.

FB: Did you have a Playa nickname?

GN: Wherever I go—the Bush administration for example, where they gave everyone nicknames—Grover is sufficiently easy to pronounce, easy to spell, unique, so I’ve just never had a nickname. When everyone had nicknames in summer camp, I never had one. I was hanging out at Burning Man with all these guys who had been around forever, and if they felt that it was important, I suppose I would have gotten one.

FB: What was the weirdest thing you saw?

GN: I was told about these two things by three guys who hopped on the bee car with me. They talked about naked bacon. What this was, they went to this place that had a sign for free bacon. But you had to cook it naked. By the way, bacon grease splatters. I was expecting these people who seemed sane to say, "OK, bye." But they cooked the bacon. That one intrigued me.

There was also a very large bathtub that held roughly 30 people. You took off your clothes, they hosed you down, foamed you, and then they hosed you back down. There’s an interest in this because there’s not a lot of showers. I did not go looking for either of those places. Those were the two sort of oddest, most different things. I definitely would not have come up with those.

FB: You’re going to have to have to come up with some ideas for next year.

FB: Did you participate in anything?

GN: I did a little lecture series. I reflected on the politics of liberty. I was the last speaker of a session that was all about psychedelic drugs. They didn’t tell me this. This guy came up to me after, so excited to see me. "I know you’re a tripper," he’s saying. "We’re all trippers here." What do you mean? But I was talking about freedom, and so were they. I took questions for two hours. It was great fun. It wasn’t some weird cultural clash.

The nudity thing, was, I don’t know, maybe 1 out of 100 people. I didn’t run into a nudist colony. It wasn’t even distracting. The whole thing was very interesting, and people had different rhythms. Some people stayed up all night and slept all day, so you’d run into different people all the time. The first night I went to bed at 2:30 in the morning.

FB: What did you get up to that first night?

GN: My wife and I drove around in a car that looked like a kitty cat until it got dark. Then somebody opened up the absinthe bar and we learned about the history of Burning Man. I was intrigued by the light touch that people were talking about. They said it takes about three years to move Burning Man in any direction, in terms of ideas. What works, what doesn’t. How you maintain that essence while spreading the idea. There are 26 Burning Man replicas overseas now.

I can’t compare it wholly to anything. This was not the Edinburgh Fringe Festival, not Woodstock, not Bohemian Grove. I went to Bohemian Grove several years ago, and nobody even peed on a tree. I don’t know I’ll ever find anything else quite like Burning Man. The idea that it’s about nudity and drugs is like saying Chicago is all about gangsters. If that was your takeaway, that speaks to you, not them.

Grover Norquist: Hillary Clinton Being Wrong on Guns and Fracking Could Cost Her the General