I was excited to see Eric Tucker’s production of Sense & Sensibility at the Folger Shakespeare Library, but I wasn’t sure how well the novel could be adapted to the stage.

Jane Austen does well with film adaptations—witness Whit Stillman’s recent Love & Friendship—but plays are different. A movie can do a lot with close-ups, editing, flashbacks, voiceovers, and sweeping shots of British landscapes. But on stage, what is the audience supposed to look at for two hours: a tableaux of various sitting rooms and dinner tables? How long can you watch exceedingly polite people exchange meaningful glances over the tops of their teacups? 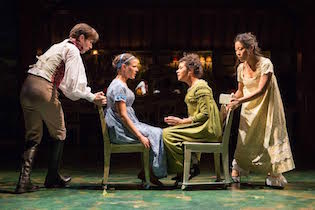 Austen is a master of delineating the interior worlds of her characters. Many of the most crucial moments in her novels rely heavily on subtext, suggestion, and things pointedly not said. Polite small talk can easily contain a deathblow, while a nearly-invisible act of self-restraint can be a heroic achievement. How can a stage production illustrate this without sacrificing the subtlety that makes Austen so great?

This production—newly adapted to the stage by Kate Hamill, of the excellent New York-based Bedlam theater group—is good for many reasons, but its shining achievement is the way in which it uses the devices of theater to wordlessly inject Austen’s biting, generous commentary into the movement and action of the play.

The stage is bare except for a backdrop and a few doorframes, windowpanes, a table, and some chairs. All of these are set on wheels, and the actors constantly move them about, expanding, contracting, and distorting the exterior world of the characters to match the emotional intensity of the scene.

Sense & Sensibility is the story of two sisters, the sensible Elinor and the romantic Marianne Dashwood, who together navigate the world of love and marriage.

In Austen’s world, gossip and scandal had graver consequences than they do in our ever-more-permissible society. Second chances were rare. If you were disgraced, especially if you were a woman, there was essentially nowhere to run. In this production, most of the cast is on stage most of the time, throwing out commentary on the main action. Even when they are silent, they are loitering in the door frames, standing near the windows, looking in.

During scene transitions, the actors often all start speaking at the same time –a great roar of gossip and conjecture that surrounds everything the main characters do. It is both funny and menacing. Austen makes fun of her society’s conventions and expectations, but she also recognizes the serious consequences of flouting them. This play balances that quite nicely. 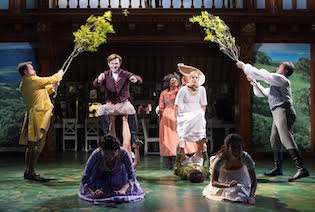 Because the stage is so often crowded, it gives the few scenes in which our characters are alone together—falling in love, or sparring in hate—a sense of greater importance and intimacy.

We see that everyone is being watched all of the time, and everyone is thinking about what others will think. The omnipresence of social pressure is literal, not figurative. And because it is handled so absurdly, it’s very fun to watch.

A production like this is impossible to pull off without a strong cast, and this Sense has one. Maggie McDowell gives us a strong and admirable Elinor who is reserved without being cold. With so much of her fate left to chance and to powers outside of her control, Elinor can only rely on being the "mistress of herself." But her hardness makes it difficult for her younger sister to confide in her, and this eventually leads her astray. As Marianne, Erin Weaver is boisterous and grating—until her rashness catches up with her, and she becomes immensely sympathetic.

The lovers, Mr. Ferrars (Jamie Smithson), Mr. Willoughby (Jacob Fishel), and Colonel Brandon (James Patrick Nelson), are also strong. Mr. Ferrars is a hapless yutz we like mostly because he is kind and Elinor likes him. Mr. Willoughby is seductive and terrible, the Bad Boyfriend to end all Bad Boyfriends. Nelson’s Colonel Brandon mixes gravity with a depth of feeling that makes you believe that when Marianne ultimately chooses him, it is indeed for love, and not her merely settling for what she can get.

This is not a fancy production: there’s really only one set, there are no extravagant costume transitions or special effects; there is some music, but a lot of it comes from the actors. The actors play the carriages, the horses, the hounds (in what is maybe the best joke in the play). They play the beds, and the storm that nearly undoes Marianne. One complaint: The play is bracketed by two unfortunate dance numbers set to modern music. Why does the Folger keep doing this? Do they realize it’s embarrassing? Would a little Henry Purcell be so much to ask?

As my friend who accompanied me to the show noted, productions like this force the audience to use their imaginations. When a production embraces the limits of theater instead of trying to be a movie, it makes demands of the audience. If an audience accepts these demands, they become co-conspirators in the theatrical project. Every time it works, the audience and the actors have created something together. This is something that live theater accomplishes that movies cannot.

Tucker’s Sense & Sensibility is fresh, and funny, and faithful to Austen’s voice and spirit. This production trusts its audience, and in doing so, it delights them.

YOU’VE BEEN WARNED: Kamala Harris Shall Not Be Criticized