Michael Bay—the man behind the Transformer films, Armageddon, The Rock, and other bombastic fare—is a divisive figure. Some critics say he’s a nightmarish whirling dervish, trading coherence for explosions and quick cuts and jittery handheld close-ups. Other critics say he’s an auteur in the truest sense of the word, a director working within the studio system with a consistent style and worldview and a surprising sense of humor.

Both camps are correct. But, after the small budget, big-muscled, darkly comic buddy caper Pain & Gain, the second group may have the upper hand.

Body builder and convicted fraudster Daniel Lugo (Mark Wahlberg) believes in the American Dream. "We all start equal," he says early on, adding, "If you’re willing to do the work, you can have anything." He’s a font of one-liners extolling the greatness of America. Here he is on wasting one’s potential: "It’s worse than sickening. It’s unpatriotic."

Lugo is tired of wearing sweatpants to work, tired of getting turned down by women, and tired of seeing no social payoff for the hours, days, and weeks he spends in the gym getting shredded. So he takes matters into his own hands. Along with Adrian (Anthony Mackie) and Paul (Dwayne "The Rock" Johnson), Daniel decides to kidnap multimillionaire scuzzball weakling Victor (Tony Shalhoub) and force him to sign over his life savings, home, and boat. 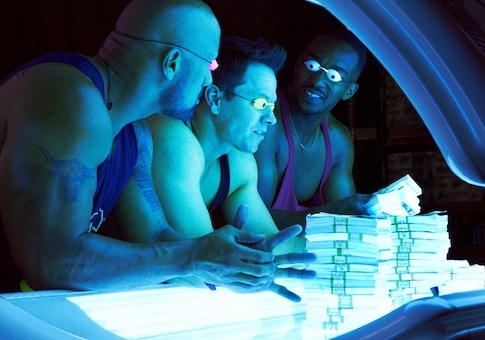 The irony of invoking The American Dream while stealing from a self-made man is not lost on Bay. "Killing me is not going to give you job skills," Victor says after signing away his property. Sure enough, the muscle-bound kidnappers run out of money and need to steal again.

Indeed, there are so many discussions of America in the movie and so many claims made on America by the beefed-up thieves, that one wonders if Bay is attempting a sly commentary on American life in the post-Cold War, pre-9/11 era in which the film is set. A muscular hyper-power with strength to spare but no focus, he seems to be saying, is a bad combination. I can’t help feeling that more than one film school dissertation will be written about how a well-known fan of the American military such as Michael Bay repeatedly invokes the American Dream in Pain & Gain.

Bay’s ecstatic style—the swooping camera shots and epic, 360-degree spins—are used to perfectly ironic effect in this film about bumbling boneheads whose self-perception is divorced from reality. Bay also seems to have toned down his editing method, at least for this movie. Pain & Gain is more intelligible than any of the Transformer films, and less slap-dash than the hastily cut Armageddon.

It’s also deeply, darkly humorous. Wahlberg is at his best, playing a know-nothing who thinks he’s a know-something with a wide-eyed naiveté when things go wrong. Johnson reminds us that he’s the most under-utilized asset in the film business, portraying an almost-reformed drug addict who is good at hurting people but hates to do so.

Bay makes excellent use of Miami’s natural (and surgically enhanced) talents: beaches, gyms, waterfront mansions, and strip clubs are in abundance. Not for the kiddies, this immensely entertaining flick is a hard-R romp through seedy South Florida.