Once upon a time, Hollywood made fantasy films that appealed to adults and children alike. Films such as Jumanji, Hook, The Addams Family, or Elf could be counted on to keep children entertained with surreal visuals and broad physical humor. And while not exactly Oscar-worthy, such films had a slightly sardonic sensibility that, with a wink and a nod, kept parents from tuning out.

Such fare has dwindled and been replaced in recent years by the offerings of animated powerhouses DreamWorks and Pixar. The few live-action fantasies that have been released—star-studded productions like the hopelessly muddled Percy Jackson and the Olympians: The Lightning Thief or the empty-headed Journey to the Center of the Earth vehicles—have been critical or commercial flops (and sometimes both).

Into that void steps Jack the Giant Slayer. It's a retelling of Jack and the Beanstalk that is memorable not for its excellence but for its relative competence. It is briskly paced and can entertain across generations, providing chuckles for the adults, propulsive action sequences for teens, and a few gross-out jokes for the kiddies.

When Jack (Nicholas Hoult) traded his uncle’s horse for a set of magic beans, he wasn’t just opening himself up for an adventure filled with gold and gold geese and gold harps and a giant who wants to use his bones to grind his bread. In director Bryan Singer’s version of the tale, Jack's trade sparks a man-versus-giant war.

With permission from the king (Ian McShane), Jack ascends the beanstalk beside gallant knight Elmont (Ewan McGregor) to rescue the kingdom’s beautiful princess, Isabelle (Eleanor Tomlinson). Also in tow is the scheming Roderick (Stanley Tucci), to whom Isabelle is betrothed. He knows about the magic beans and possesses a magic crown, the only tool capable of controlling the giants.

That is "giants," plural: There is a whole army of angry, agitated, and armed behemoths waiting for their shot at revenge on the little people down below. 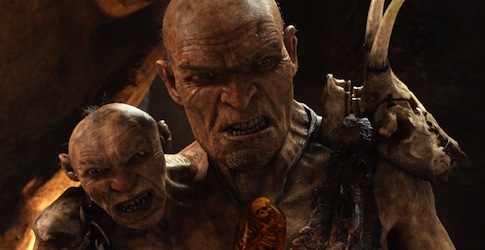 Though far from perfect—among other issues, Hoult and Tomlinson, the putative leads, are out-acted not only by McShane, McGregor, and Tucci, but also by veteran character actors Ewen Brenner and Eddie Marsan—Singer and the screenplay’s writers (one of whom is the criminally underrated Christopher McQuarrie) keep the plot moving at a relatively brisk pace.

Jack and the Giant Slayer was screened for critics in 3D; as always, I must suggest audiences view the picture in 2D and save themselves the surcharge. While less aggressively awful than some other pictures in the format (I’m looking at you, Hansel and Gretel: Witch Hunters), the effect adds little to the experience.

We may be in for something of a renaissance of the family-friendly fantasy, as Sam Raimi (the auteur behind the Evil Dead and Spider-Man trilogies) takes audiences back to Oz next weekend in what promises to be a high-octane, visually stunning film.

Until then, though, movie-goers in search of something to keep parents and children alike entertained will be pleasantly surprised by Jack the Giant Slayer.