The Church of Animal Rights

NEW YORK — As I exit the church this Sunday, I leave behind the day of rest to enter the new evangelism.

It presents itself in the form of a "protest crawl"—a pilgrimage picketing six different McDonald's locations in Midtown Manhattan. The spectacle is organized by the Humane League, an animal rights group based out of Washington, D.C., which wants everyone to know that Mickey D's is a murder factory for chickens.

These are the people who sometimes dress up as creepy clowns and show off the gory truths about fast food in the form of "unhappy meals." Overfeeding, shortened life spans, cramped conditions: The way these companies treat their animals is sick. The Humane League often pops up in cities around the country, hoping to raise awareness for the folks who don't associate the food on their plates with the animals in the barn. 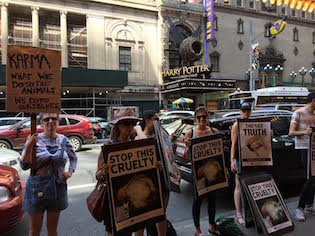 But there are no clowns today. Instead, about 20 polite activists—who are mostly women in their twenties—have gathered outside Penn Station behind two Humane League interns holding a BOYCOTT MCDONALD'S banner. It depicts a chicken fattened, torn, and bloodied from human mistreatment. The rest of the protesters pick up signs with similar messages: THE SAD TRUTH, STOP THIS CRUELTY, and ANIMALS DESERVE BETTER.

Humane League New York City Coordinator Sophia Deluz introduces herself to me. She's wearing a silver chain necklace that spells out the word "vegan" and is carrying a hemp purse with the ledger "This bag is meat free." Before becoming a full time protester, she worked in finance.

She leaves me to go talk with the three police officers who will be escorting the group around Midtown this afternoon.

Two part-time Humane League interns, Emily Kelly and her friend Hillary, stand a bit removed from the rest of the group with the banner in tow. They are discussing the merits of "Eating Animals," a Natalie Portman-helmed vegan documentary released June 15.

"I thought that they were just showing people that they need to think twice in a way that wasn't bad or with a ‘shame on you' tone," Emily says, as she puts an empty bottle of Spindrift soda in her leather backpack. "I think people really get down on vegans because they think we just want to make them feel bad."

She straightens her blue wayfarers under a straw fedora and turns to me.

"You must be dying from the heat in that jacket. Did you see the film?"

"Oh, no," I say. "Seersucker is lightweight—I haven't seen the film."

She assures me that it's a must-see and starts telling me about a vegan book she just read. Emily has been involved in the activist life ever since she moved to New York—attempting to fill out her "spare time" with a meaningful activity.

She informs me that in some ways, Animal Rights has become her personal faith.

"I was telling someone that being vegan is not enough; you need to be spreading the word," she says. "And my sister was like, ‘That's what an Evangelical Christian would say.'"

"But it's true," she says. "You and your faith is not enough. You need to save others too."

She straightens her sunglasses again.

"When I talk to Christians about why they do what they do, there's a lot of similarities between us. They want to spread the word and often feel remorseful for the past they've had," she says. "For me, I've contributed to the killing of all of these animals. I ask how could I be giving more of myself. Which is what you follow in a sort of faith-based environment."

I'm about to ask if she's still mitigating guilt for her leather bag, but the procession is beginning.

Sophia instructs us to march in a tight formation to each McD's. We must then stand "silently" in two rows, one against the buildings and the other on the street side of the sidewalk. Together we form a gauntlet of disturbing images through which all customers must pass before consuming their blood chicken.

A guy in a Yankees shirt standing on a street corner sees the signs and mutters to himself: "‘Animals deserve better'— better than what? They sit around and eat and poop. What could be better?"

As we stand in solemn silence outside each McDonald's, Sophia and Hillary hand out postcard-sized leaflets that read HAPPY MEALS: AN ORIGIN STORY. Like the banner and the signs, they confront viewers with gory images of dead chicks.

Hillary hands out the leaflets upside down so people will think that they are coupons.

As New York rushes by, only Sophia speaks. The bustle of a weekend afternoon, the grumble of traffic, the murmurs of the ocasional disapproving passerby—she cuts through all of it with a perky call to action.

I start smelling McNuggets through the opening and closing doors. The scent of fried food saturates the sweltering air. I haven't eaten since I shared a donut with my girlfriend this morning after mass.

The priest had told us to stay out of the sun. The heat could drive you crazy.

I could go for a burger right now.

But it's not to be, because we're off to crash a McDonald's-hosted World Cup viewing party on 6th Avenue. As we walk by a fancy outdoor restaurant, a glass falls on the floor and shatters. A child begins to wail. I look over and see a little girl with no cup seated behind a plate of chicken fingers and french fries. A pool of red fruit punch is seeping into the concrete below her chair.

Sophia comes up alongside me, full of enthusiasm.

"I think that it's so nice that on a Sunday—a really hot Sunday and Father's Day too—that people come out here and are willing to do this," she says. "It shows our dedication."

The mother is cleaning up cleaning up the mess and the father is coaxing his girl into eating her meal. She's quieting down by the time we turn the corner to the McDonald's party. Crisis averted.

Outside the World Cup party, I stand next to Lydia Harris, a newly-converted vegan recently graduated from college. She stopped eating animals after working on a natural farm, but doesn't consider her lifestyle religious as much as it is missionary.

"But in that this is ethics based, this is a lot like a religion," she says. "I mean, we all do what we think is right in the world."

"I'm spiritual but not religious!" interjects the woman next to her.

But I'm confused. I want to ask Lydia how she can keep living in urban society with so much evil done to animals in every industry. I mean, what about the clothes we're wearing? Or her animal-based lipstick? Where is the line?

But a toddler interrupts us. It looks like he wandered away from the party to check out these weird signs. He's holding a coke in one hand and a Sausage McGriddle in the other.

He points at Lydia's sign with his McGriddle, and with a flourish, throws back his head in theatrical anguish.

"Let them live!" he shouts, and takes a big bite.