Chris Pine is a man born slightly out of time: In a different era, he could have been a Harrison Ford- or Mel Gibson-style megastar, equally capable of inducing excitement and laughter in audiences through sheer force of personality. In this era, he’ll have to settle for being one of our more interesting A-list actors, anchoring huge franchises and smaller pictures within weeks of each other.

Hell or High Water, out now in D.C. and a few other markets before opening wide next weekend, is of the smaller variety. Pine stars as Toby Howard, a cowpuncher who, along with his brother Tanner (Ben Foster), is robbing a chain of banks out in the plains of West Texas. The pair’s mother has recently passed, and they need to collect some capital to pay off her debts—a reverse mortgage, tax liens, that sort of thing—so the land, which has oil underneath it, isn’t taken from the family right before the black gold starts flowing.

Chasing the Howards are Marcus Hamilton (Jeff Bridges) and Alberto Parker (Gil Birmingham), Texas Rangers. Marcus is a few days from mandatory retirement and Alberto, his long-suffering half-Indian, half-Mexican partner, plans on taking over when he’s gone. It’s an open question as to whether Alberto will miss Marcus’s teasing—the sort of racially tinged humor that work acquaintances either enjoy or endure, depending on how friendly they are—but he gives as good as he gets, and the humorous banter between the two lightens the mood.

If Bridges and Birmingham provide the laughs in Hell or High Water, then Pine and Foster provide the soul. Pine’s stringy hair and baleful blue eyes reflect the angst and desperation of a man—and a people—abandoned by the system: "Three tours in Iraq but no bailout for people like us," blares an unsubtle bit of graffiti outside the first bank the Howard boys rob. It sets the mood for the rest of the film. Toby’s not Robin Hood, exactly, but his choice of targets finds few defenders in the community, common folk who live in a landscape littered with notices like "business closed" and come-ons for quick and easy "Debt Relief" like reverse mortgages that are little more than a trap to lose whatever small piece of property your family has.

Hell or High Water is one of the best films released thus far this year. The action unfolds tightly and efficiently, alternating deftly between tense action and genuine hilarity. It’s not exactly Oscar bait, but writer Taylor Sheridan deserves some consideration for his screenplay and you can’t count out Bridges for a supporting nod. If I were king, Pine would be on every Best Actor Oscar shortlist too, though his role is not a flashy or showy one of the sort the Academy prefers to reward. His is a subtle kind of stardom, one that allows him to believably melt into Toby’s skin. 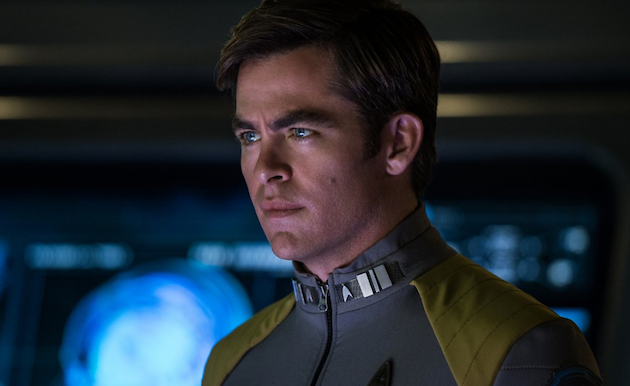 Chris Pine in ‘Star Trek Beyond'

It’s a testament to Pine’s abilities that he’s just as credible as a Starfleet captain as he is in the role of a semi-competent bank robber. Star Trek Beyond is Pine’s third turn in James T. Kirk’s skin, and the role suits him rather perfectly. As in the franchise’s previous outing, Star Trek Into Darkness, Beyond opens with a humorous action sequence. Kirk, ever the reluctant diplomat, is awkwardly trying to negotiate peace between a nervous group of dog-sized aliens and their mortal enemies.

Three years into his five-year mission, Kirk has become unmoored by the vastness of outer space. We hear Kirk’s disorientation in his captain’s logs, and we get a physical sense of it in Justin Lin’s direction, as the Fast and Furious series founder cleverly plays with perspective. There is no up or down in the three dimensions of space, a fact Lin reminds us of in the opening moments as the camera rotates around the USS Enterprise from an odd angle and again, later, when we see the Starbase Yorktown, which features an Inception-like architectural design, skylines folded in on each other around orbital rings.

Yorktown looks, as Dr. Leonard "Bones" McCoy (Karl Urban) puts it, like "A snow globe in space." And that snow globe is the ultimate target of Krall (Idris Elba), a mysterious villain who lures the Enterprise and its crew to a planet hidden deep within a nebula impenetrable by communication signals. Needless to say, there is no shortage of action as Kirk’s crew does their best to stop Krall’s evil plans.

The action is dispensable: exciting, sure, but a bit over-enthusiastic (and overlong). Beyond does a better job than previous entries in the rebooted series of spreading the story around: Bones and Spock (Zachary Quinto) have their own Mutt-and-Jeff-style subplot, as does Scottie (Simon Pegg, who cowrote) and series newcomer Jaylah (Sofia Boutella). Yet this is undoubtedly still Kirk’s show, a film centered on his growth as a captain and his renewed commitment to the ideals of the Federation. With any luck, Pine will stay in the Captain’s chair for years to come.