Barbra Streisand can't stop eating pancakes, and it's making her gain weight, according to comments made by the world's greatest living vocalist on Twitter Saturday.

Streisand, whose voice the pianist Glenn Gould once accurately described as "one of the natural wonders of the age," blamed her hotcake habit on President Donald Trump and reading the news.

Donald Trump is making me gain weight. I start the day with liquids, but after the morning news, I eat pancakes smothered in maple syrup!

The 74-year-old singer and actress is herself a journalist, contributing occasional items to a lifestyle blog called The Huffington Post. In one column, she wrote that President Trump pales in comparison to "giants who served as president" such as Washington, Lincoln, and Theodore and Franklin Roosevelt. She also excoriated the president as "clueless, reckless, graceless, mindless, and heartless."

Streisand's most recent album, Encore: Movie Partners Sing Broadway, which features duets with Seth McFarlane and Melissa McCarthy among other talents, received a mixed review in the Washington Free Beacon. 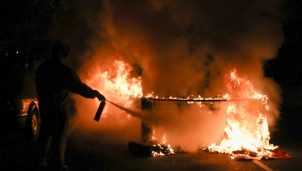