If Shakespeare’s A Midsummer Night’s Dream has a moral, it’s that love makes you act dumb and weird. Aaron Posner’s Midsummer, now playing through March 6 at the Folger, is also dumb and weird, but sometimes in a good way.

The worst thing a director can do with Midsummer is to make it cutesy: put a bunch of teensy weensy fairies in tutus and have them prance around the stage, strewing flowers and being precious. Posner wisely eschews twee and goes for a bawdy, slapstick vibe that often touches on the bizarre.

The story takes place on a set that looks like Van Gogh’s ‘Starry Night.’ There is a yellow cutout moon set against a deep, impressionist sky. The costumes are modern. There are few fairies, and those that we have do not have wings.

My favorite thing about this production is the way Posner’s characters seem aware of the poetry they’re spinning—how the characters, not just the actors, enjoy the words, acknowledge when the poetry is really good and when they’re slaying it. No one does this better than Eric Hissom’s Oberon. The King of the Fairies is played here like a self-absorbed Keith Richards-y rock star. When Oberon gets to his best speech, "I know a bank where the wild thyme grows," he pauses and seems to wink at the audience, as if to say, check this out. (Note to Hamlets: this is only a good idea for comedies).

Erin Weaver plays Oberon’s assistant Puck like a fairy Crossfit instructor, with manic aggressive cheerfulness that masks a deep inner sadness. This Puck is very much in love with Oberon, who seems to know she’s totally smitten and ignores her feelings completely. Oberon tasks Puck with helping him win back the affections of his wife, Titania (a regal Caroline Stefanie Clay). The pain of this mission causes Puck to infuse the tricks she plays on mortals with an undertone of meanness and spite, which suits the play’s dark side.

Midsummer has many plots, but it is, very roughly, a love triangle that shifts and expands into a love polygon: friends and foes, fairies and half-human, half-animal monsters, all come under love’s spell, spend a night in madness, and wake up chastened and confused.

Helena loves Demetrius, but Demetrius loves Hermia. Hermia loves Lysander, but they’re not allowed to get married, so they run away into the woods to elope. Demetrius follows them, and Helena follows Demetrius. The forest is full of mischief-loving fairies who apply love potions to the unsuspecting males, scrambling the lover’s affections, enraging the women, and leading to utter chaos that requires magical intervention to be set right. 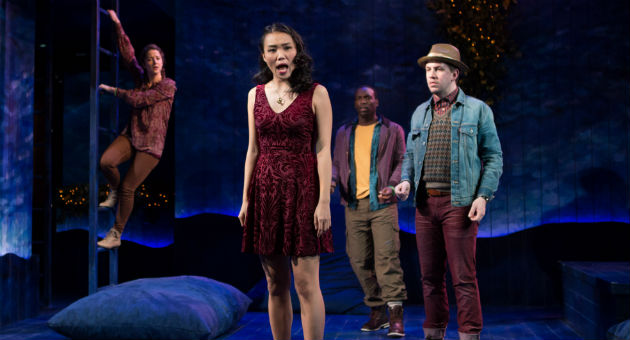 The thing about Midsummer is, the fairies aren’t nice. They’re a little bit scary and crazy. Puck boasts about playing harmless tricks, but she also likes to "mislead night-wanderers, laughing at their harm." She causes real damage. The mortal lovers aren’t so nice either. It’s a rough night for everyone, and the weddings that occur the next day are surely tainted with the memories of these all too fresh infidelities and treacheries.

And yet, it’s hard not to love the lovers in this production: all four parts are very strong, and each is skilled at handling the physical comedy this play requires. Especially lovely is poor Helena (Kim Wong), who begins the play crawling after Demetrius on all fours, crying, "I am your spaniel … The more you beat me, I will fawn on you: Use me … spurn me, strike me, Neglect me, lose me; only give me leave … to follow you."

This part can be played very darkly, but Wong manages to make Helena both touching and hilarious. She’s twisted and sad, but you also can’t help but feel that her lack of pride betrays an ultimate confidence that one day she will get what she wants. She might be deranged, but she’s also a little bit brave.

The play begins and ends with the wedding of Theseus, Duke of Athens, and Hippolyta, Queen of the Amazons. Posner has smartly double casted this part: Theseus and Hippolyta are played by the same actors who play Oberon and Titania. When they play the fairy couple, Hissom and Clay are passionate and lustful. But as Theseus and Hippolyta, they are cold and formal, underscoring the unhappy (for Titania) circumstances of their union: Theseus captured Hippolyta in battle. She’s a forced bride.

The wedding entertainment is a play-within-a-play: Theseus hires a troop of actors, "the rude mechanicals," to put on the tragedy of Pyramus and Thisbe.

This is where Posner’s production starts to go bad.

For no good reason I can think of, the Rude Mechanicals are played as students in a theater class at an all-girls high school, with matching knee-socks and plaid skirts. Nick Bottom (Holly Twyford) is usually just the hammy lead actor in the company, but here she’s the drama teacher who really wishes she could be in all the plays. As a former high school theater kid, I recognize the type, and I get it, but it doesn’t add anything to the story, or make it funnier, or tell us anything about the play.

Thankfully, this change doesn’t distract too much from how truly funny and lovable the Mechanicals are. While they are chasing the lovers through the woods, Puck spots the actors at work. Laughing at Bottom’s pomposity and vanity, she temporarily turns the actor into an ass, with a tail and hooves, big donkey teeth, and enormous donkey ears. Twyford is grotesque and hilarious, wobbling around on awkward, hoof-ish heels, clapping her hooves together like the coconut-wielding knight from Monty Python’s Holy Grail.

The Mechanicals start out sloppy and amateurish, but ultimately surprise us (and Theseus) with a moving and well-acted Pyramus at the end of the play.

Oh, that it had ended here.

This could have been a great production. But what I want to know about this Midsummer, what I still don’t understand, is why Posner decided to end his production with an original song and dance number that reminds me, more than anything, of an Old Navy commercial. 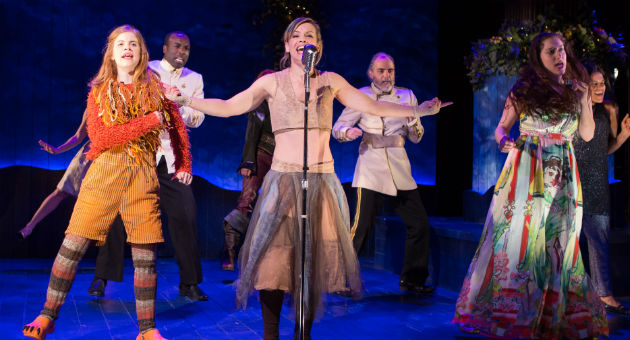 Musical numbers in Shakespeare are wonderful; Shakespeare wrote many songs, and his lines can translate into beautiful music. Done with restraint, as when, at the beginning of this play, one of Lysander’s comforting speeches to Hermia gets turned into a serenade played on the ukulele, it can be nice.

But here the final scene explodes into a happy-clappy pop number I would really rather forget. I didn’t get a full transcription of the lyrics but, "Dreams are dark, dreams are light, dreams are wrong, dreams are right" should be enough to convey things. I covered my eyes for a minute. What masochistic, megalomaniacal instinct leads someone to put on a production of Shakespeare and decide, "You know what’s missing from this? My poetry." The musical number seems like something Bottom would do, and we all know what kind of animal he is.

But just when the song becomes unbearable, Puck slips back into Shakespeare’s closing lines of the play: "Gentles, do not reprehend. / If you pardon, we will mend…"

It was almost like Puck was apologizing for the dance break. Good. The ending was awful, but it turns out that there’s very little I won’t forgive in a Shakespeare production if it really makes me laugh.