There's a moment in 12 Strong—a fact-based accounting of the first Special Forces team inserted into Afghanistan following the 9/11 attacks—when the soldiers we've been following watch a video of a woman being stoned to death in Afghanistan. It is brutal and ugly but not what one of the men had asked for. "This isn't intel, it's motivation," he says, adding that he doesn't need motivation. He's got two collapsed skyscrapers and 3,000 dead Americans worth of motivation.

12 Strong, similarly, sometimes comes across not as intel but as motivation. It has been sold as the true story of the horse soldiers of Afghanistan, the team that helicoptered in behind enemy lines to help the Northern Alliance drive the Taliban and al Qaeda from the stronghold of Mazar-i-Sharif. It is, undoubtedly, a story worth telling. Captain Mitch Nelson (Chris Hemsworth) has to fight his way off desk duty and back to the front lines, pushing through a bureaucratic morass to make sure our best and brightest are in the field. "You break this team up, you're cutting the head off our most venomous snake," Chief Warrant Officer Hal Spencer (Michael Shannon) tells his boss, Lt. Col. Bowers (played by the always-entertaining Rob Riggle). Needless to say, the team draws blood when it gets its chance to bite—after dutifully saying goodbye to their families, of course, reminding us of the personal toll these heroes pay.

There's an annoying tic in 12 Strong: We are repeatedly and repetitiously told how the battles will unfold and what the stakes are, often hearing plans from Col. Mulholland (William Fichtner) first before they are relayed by Nelson to his team. It's as if director Nicolai Fuglsig and writers Ted Tally and Peter Craig didn't quite trust us to follow the action on our own. Which is odd, because the battle scenes are quite well done, aerial bombardments and on-the-ground gunfights stitched together by editor Lisa Lassek in a way that never leaves us wondering about the fight's momentum or location or stakes.

So, as intel, the movie is fine: it tells a true story, and does it well. But as motivation, 12 Strong is more interesting and relevant, serving as a potent reminder of the stakes in Afghanistan and the War on Terror more generally. It's telling that Fuglsig and his team cut away from the action at one point to show us a brief vignette of life in Taliban-occupied Afghanistan. A bearded man with wicked eyes dressed all in black confronts three crying girls. He quizzes them—they can read, they can do math—and in response he executes their teacher. Teaching girls is against the law, and the punishment is severe.

This moment could have been cut without losing anything at all from the story. But it is, in many ways, the most important scene in the movie, serving as a stark reminder of the anti-enlightenment forces against which we are arrayed and the stakes of cutting and running, of leaving the people of Afghanistan and elsewhere to theocratic thugs. 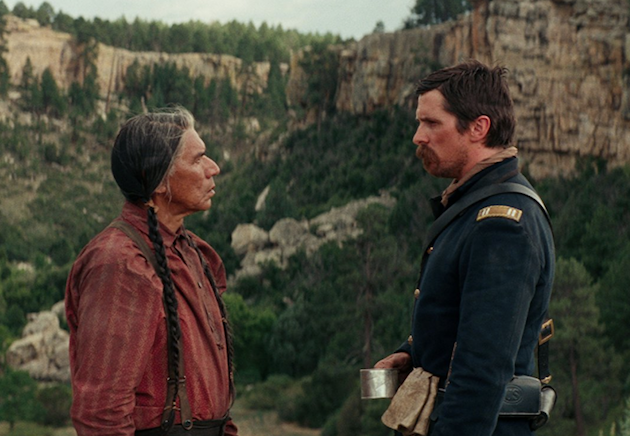 Hostiles—which chronicles the journey of Army Captain Joseph Blocker (Christian Bale) as he takes the dying Chief Yellowhawk (Wes Studi) back to his sacred lands— is a more nuanced, more measured take on the idea of military force as the basis of our freedom. But it is littered with similar messages and reminders of how, exactly, our rights are guaranteed.

You see it in the film's beginning, when a clump of Comanches on horseback crest the horizon and proceed to slaughter a rancher and his family, his lone gun no match for them. You see it again later in the film, when the shot is repeated but with white men coming over the horizon, bearing down on our protagonists with demands to vacate the area they are camping in. Captain Blocker holds a piece of paper with orders from the president himself that he and his fellow travelers be given safe passage, but words mean little when you're staring down the barrel of a gun. It doesn't matter who the enemy is or what position you hold in society; the only rights you have are those you can defend.

The titular hostiles are ever-present, ever-evolving. They're the aforementioned Comanche and the angry ranchers, but also a rogue soldier sentenced to prison for a vicious crime and a cadre of fur trappers who aren't above a bit of sexual violence. The American frontier was a stark place: one filled with beautiful vistas and ugly cruelties. Cinematographer Masanobu Takayanagi takes full advantage of America's natural beauty, filming as often as possible at sunrise and sunset to produce dark-hued backgrounds and shadowy silhouettes limned by a flicker of sunlight. And director Scott Cooper happily delves into its ugliness, into the brutality and the beastliness that accompanies society on the rim of the law's reach.

Hostiles is not exactly a feel-good film. There's no march to triumph like the one we see in 12 Strong. But it features a stellar cast—Bale and Studi, of course, but also Rosamund Pike and Stephen Lang and Jesse Plemons and the Oscar-nominated Timothee Chalamet, in his least-annoying performance of 2017. Those few filmgoers desperately looking for a modern take on The Searchers will find much to enjoy here.