Boeing's announcement on Friday that it is withdrawing from a contract with Brazil's Empresa Brasileira de Aeronautica, known commonly as Embraer, is just the latest casualty of the coronavirus pandemic.

The contract cancellation means thousands of potential new jobs are now off the table. It also means that ties between the United States and Brazil, which have been tense since it was revealed in 2013 that the Obama administration had tapped the personal mobile phone of then-Brazilian president Dilma Rousseff, are unlikely to improve.

"It represents a U.S. corporate giant casting off this Brazilian company like some excess baggage as soon as it becomes convenient to do so—and it is typical of the American disregard for us," one Brazilian aerospace executive told the Washington Free Beacon.

Boeing announced in 2018 that it would merge with the commercial division of Embraer, taking in 80 percent of the company's operation in a $4.2 billion agreement.

The agreement would allow Boeing access to markets in which its aircraft were too large or too expensive. Embraer, in turn, would gain access to Boeing's global network of maintenance, spare parts, and customer support centers.

The deal was teetering on the brink near the end of 2018 and into 2019 when Boeing's finances were strained due to fatal crashes of its 737 MAX aircraft. The crashes dented Boeing's reputation and its finances, ultimately culminating in the firing of CEO Dennis Muilenberg.

But the fatal blow to the merger came as the coronavirus spread globally. The near total ban on air travel in recent weeks has been a disaster for the airlines and the companies that supply them with aircraft.

By the second week in March, shares in Embraer fell 14 percent—giving it a market value of around $1.3 billion, less than a third of the value the company commanded when the Boeing deal was announced in 2018.

"It is inconceivable that Boeing will now still pay $4.2 billion for a company that today is only worth $1 billion," a Lockheed Martin representative said just days before Boeing officially announced it was withdrawing from the agreement between the two firms.

The now-canceled merger is the tip of the iceberg of the economic devastation wrought by the coronavirus. The airline industry that aircraft builders depend on in order to keep their factories running is collapsing—with airports closed and no start date to resumption of regular passenger routes in site. 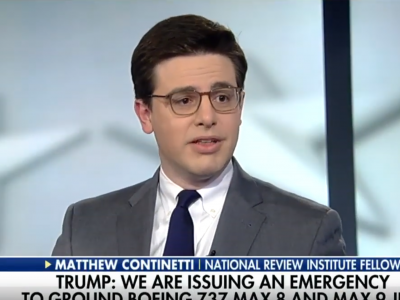 Continetti on Decision to Ground Boeing 737 Max: ‘Trump Is a Security President’