The University of California has used a loophole to fill classrooms with underqualified international students while turning away some of California's brightest high schoolers, according to multiple state reports and interviews with current and former faculty members.

Two state reports now at the center of a civil lawsuit against the U.C. system say the U.C. administrators are using a loophole to get around a state requirement to admit the top 9 percent of California high school graduates. 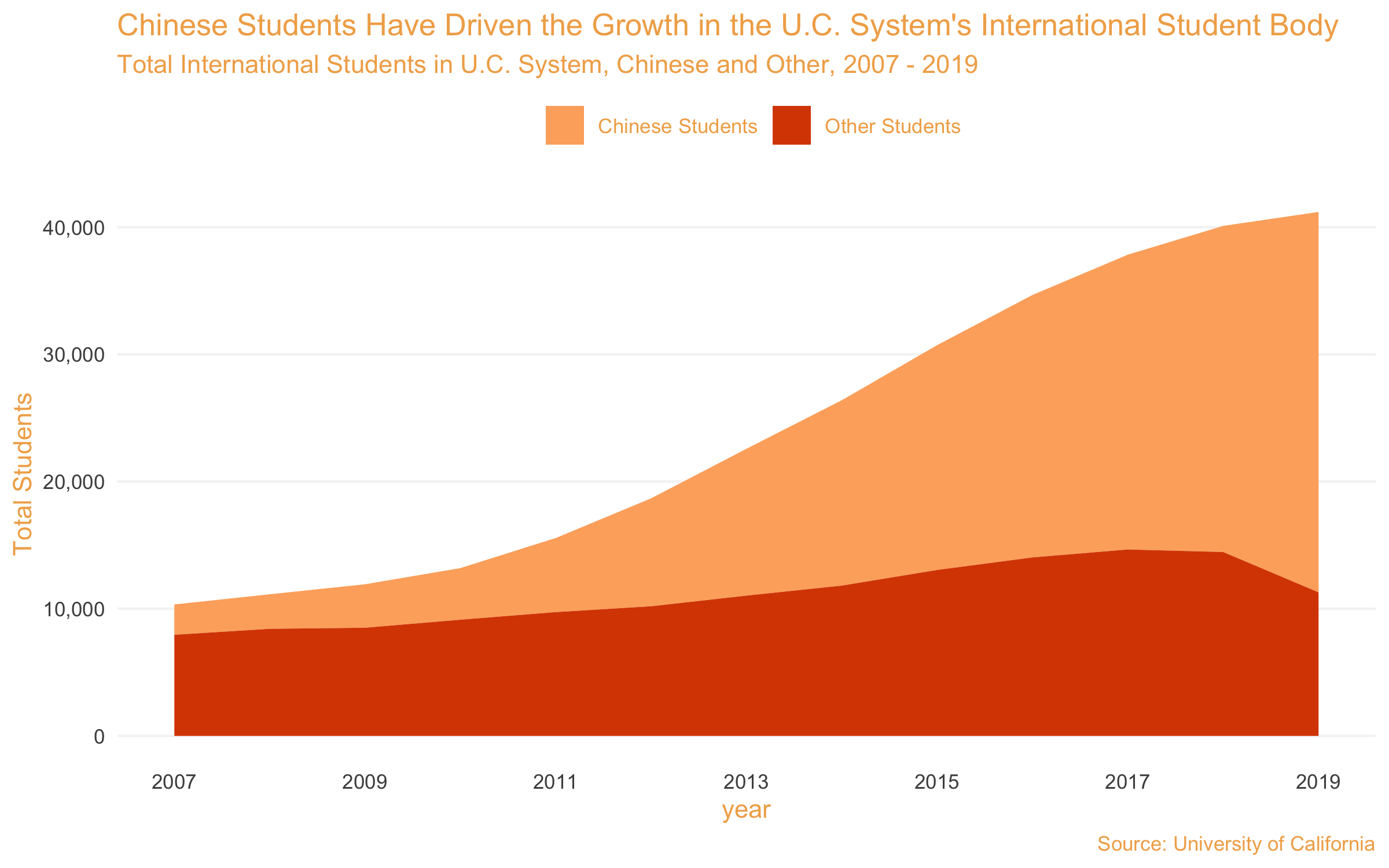 The reports say that the increasing number of international students, who pay full tuition, has come at the expense of state residents. "Over the past several years, the university has undermined its commitment to residents in an effort to increase its revenue by recruiting and enrolling nonresidents," state auditor Elaine Howle wrote in 2016.

A spokesman for the university system acknowledged that foreign students pay substantially more than their California peers but argued that its admissions practices are not intended to hurt California residents. University spokesman Stett Holbrook said the university caps out-of-state enrollment at 18 percent and that all qualified in-state students are offered a spot at one of the U.C. schools, even if not their top choice. Holbrook argues that international students actually underwrite in-state residents.

But the reports, now at the center of a civil suit against the university system, argue that U.C. administrators are denying admission to in-state residents to make room for the international students. Filed by the California mother of two college students, the lawsuit accuses the U.C. system of discriminating against local students, with the plaintiffs demanding financial compensation for 110,000 in-state applicants who were denied admission over the last decade and pushed to more expensive out-of-state schools.

"I don't think [the admissions office stops] to think about how it affects these kids," Dawn Urbanek, the mother behind the lawsuit, told the Washington Free Beacon. "These kids are slapped in the face right out the door and it's just heartbreaking." The California Office of Civil Rights denied her complaint in June, arguing that the plaintiffs could not point to a particular student hurt by the policies. Urbanek is now appealing the decision. 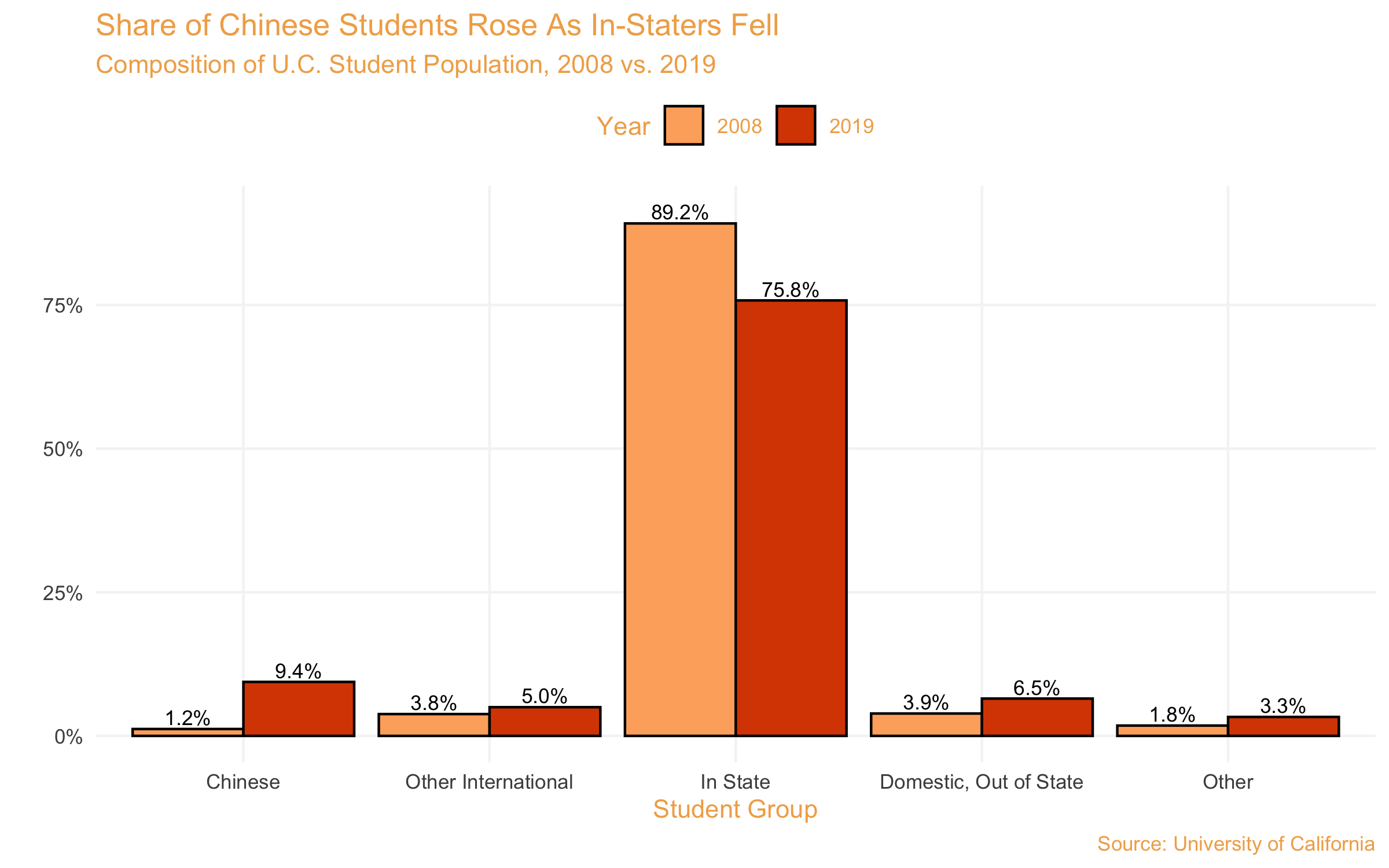 The U.C. system previously guaranteed admissions to the top 12.5 percent of California residents, but as the Great Recession set in, the number was pushed down to 9 percent.

Urbanek's complaint alleges that the university took advantage of the so-called referral process, in which Californian teens are denied admission to a top-choice school but offered a seat at a less-desirable institution. The state auditor found in 2016 that all of the referred applicants were directed to the bottom-ranked U.C. Merced, which sees 99 percent of admitted students enroll at another school.

A current U.C. faculty member who requested anonymity to speak freely told the Free Beacon that administrators have systematically lowered standards to boost out-of-state enrollment in order to pad their bottom line.

A former UCLA faculty member, Tim Groseclose, recalled that a frustrated administrator involved with budgeting told him, "They're trying to run a champagne university on a beer budget." Groseclose said the increased number of international students dates back to the 2008 economic collapse, describing it as the university's response to state budget cuts.

Administrators told the Free Beacon that, at least in 2019, the international student body was simply superior to in-state residents, arguing that they had higher GPAs and SAT scores.

The auditor recommended that administrators reform the admissions problem because the current system "not-so-subtly" pushes students out of state by sending them to the least prestigious state schools. A 2019 state report found that more than 10,000 highly qualified Californian students were referred to Merced, almost all of whom turned down the admissions offer.

For Urbanek, the system is shortchanging the taxpayers who bolster state schools. "You work hard and you do the right thing, and you are supposed to get rewarded for your hard work," she said.

Published under: China, University of California

‘Whatever You Need’: How Hunter Biden Helped the CCP’s Premier Influence Group Gain a US Foothold