It is a testament to the reputation Bill and Hillary Clinton have acquired over the years that the answer to this question is "Yeah, probably. [Shrug.]" 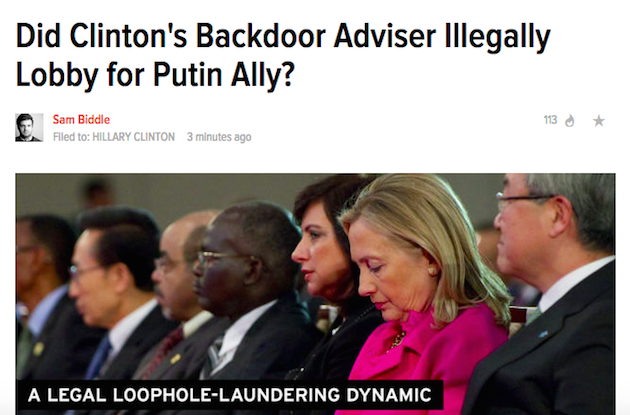 According to emails obtained by Gawker, longtime Clinton aide Sidney Blumenthal appears to have secretly lobbied then-Secretary of State Hillary Clinton on behalf of a Georgian billionaire politician seeking closer ties with Vladimir Putin, and in doing so may have violated federal law:

In 2012, Georgia was gearing up to elect a new prime minister. Oligarch Bidzina Ivanishvili led the opposition Georgian Dream party, which called for closer relations with Russia—a state that had invaded Georgia only four years earlier. He was opposing the incumbent President Mikheil Saakashvili, who had enjoyed U.S. support.

Ivanishvili was eager to meet with then-Secretary of State Clinton, but found himself snubbed during a state visit in June 2012. In September 2012, Blumenthal prepared a long, official-looking memo for Clinton on the subject of the Georgian election. It passed along a note from John Kornblum, an international lawyer who had served as ambassador to Germany under Bill Clinton. According to Blumenthal's memo, Kornblum was "working with the political party in Georgia opposing Saakashvili"; contemporaneous press accounts corroborate the fact that Kornblum was formally acting as an adviser to Georgian Dream.

Blumenthal's preamble to the memo warned that Georgia "could be a potential hot spot a month before the U.S. election" if Saakashvili decided to "ratchet up tensions with Russia" as a political maneuver. Though he wrote that he was passing on Kornblum's memo "without comment," it is clear that Blumenthal thought the ideas should be taken seriously.

Kornblum went so far as to forward a personal letter (via Blumenthal) to Clinton from Ivanishvili requesting Clinton’s support.

Given that Kornblum and Blumenthal were pretty clearly engaged in lobbying on behalf of a foreign official, they should have registered with the Department of Justice if they wanted to follow the law. But they didn’t, probably because they assumed they could claim that no direct lobbying occurred because the communications were delivered through a middleman, in this case Blumenthal. The law seems pretty clear that this is not allowed, but we're talking about the Clintons here, so they’ll probably get away with it.

U.S. Will Not Recognize Reelection of Belarusian Strongman