By now you've surely heard how the Oklahoma state legislature is proposing to ban hoodies. The story has been picked up by the media across the nation and has been characterized as an intolerant move to paint minorities as suspects and potential criminals.

Set aside, for a moment, that the notion that a bill banning hoodies would unfairly target minorities is, in and of itself, a racist one. More importantly, the media has it completely wrong. The proposed law has nothing to do with hoodies. Nothing.

In fact, the law is already on the books and Oklahoma State lawmakers are merely making a two-sentence modification to it.

The meat of the existing law (which dates back over 90 years) reads as follows:

It shall be unlawful for any person in this state to wear a mask, hood or covering, which conceals the identity of the wearer during the commission of a crime or for the purpose of coercion, intimidation or harassment.

The new language being proposed adds two sentences. The first would come right after the above statement and it reads:

or to intentionally conceal his or her identity in a public place by means of a robe, mask, or other disguise.

those wearing coverings required by their religious beliefs, for safety or medical purposes, or incidental to protection from the weather.

And that's it. No mention of hoodies or any garment even close to meeting the description of a hoodie.

In fact, the only mention of a "hood" is the portion of the law that has been on the books for 90 years. Why would Oklahoma have a 90-year-old law prohibiting "a hood or covering, which conceals the identity of the wearer during the commission of a crime or for the purpose of coercion, intimidation, or harassment"?

You guessed it. This law was written to help law enforcement crack down on the KKK. Only the modern American media can take a law originally designed to combat the KKK and make it seem as though a bunch of racists in very-red-state Oklahoma is trying to paint hoodie-wearing black youths as criminals-in-waiting.

And that's just what they've done.

The Huffington Post sported this headline: "Wearing A Hoodie In Oklahoma Could Soon Cost You A $500 Fine" 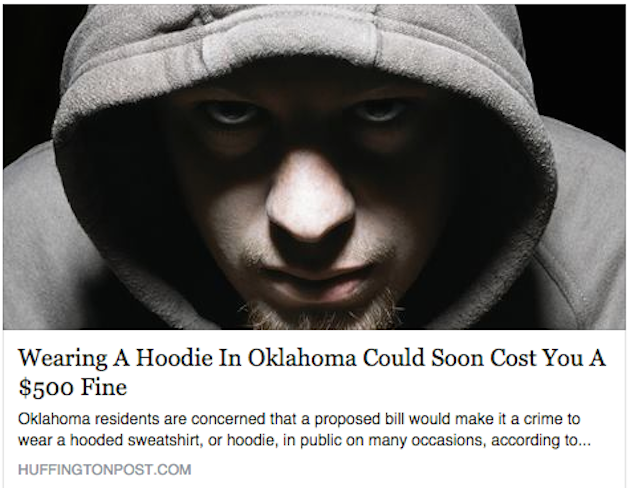 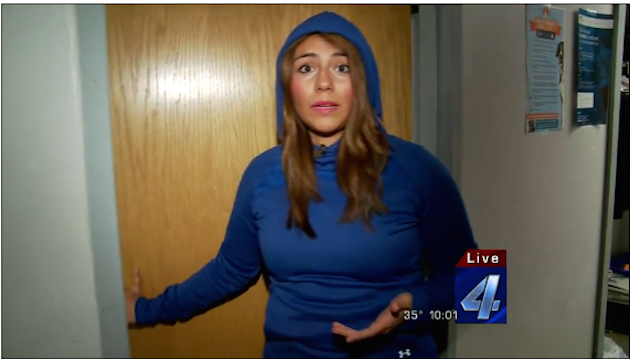 Sen. Don Barrington, a Republican out of Lawton, Okla., proposed the law and is frustrated by the media's unfair and duplicitous characterization of his bill. In a statement, Barrington said:

"The bill is not designed to ban hoodies, but to prevent the wearing of masks or disguises in the commission of a crime. The proposal is intended to protect law abiding citizens, not limit their rights."

"This is simply an attempt to combat crime and make businesses and public spaces safer for everyone," he said.

But the media has had their way with the narrative and all of America now believes that lawmakers in Oklahoma want to ban all those little potential Trayvon Martins from wearing hoodies because anyone wearing a hoodie is obviously a criminal just waiting for the right opportunity to mug someone. Even though the law is actually a ban on Klansmen.

Thanks, HuffPo, for continuing to be a part of the problem.