President Obama made a BuzzFeed video (actually a promotion for Obamacare) that has been viewed more than 22 million times. Many have pointed out that the video itself is very silly and unbecoming of a sitting president, who makes himself look like an idiot by playing around with a "selfie" stick.

However, many have also failed to realize that most BuzzFeed readers (and most Americans) eat this crap up. At least Obama can pull it off. Just imagine Hillary Clinton shooting a video like this. That’s another reason why Joe Biden should be considered the prohibitive Democratic frontrunner in 2016.

However, Obama’s promo video is problematic. Apart from the fact that the video features only men (not counting an objectifying sketch of the First Lady), there is a very problematic scene in which the president appears to promote gun violence.

President Obama pretends to fire a gun to promote health care. Is it just me that finds this appalling? pic.twitter.com/cZqSNDIKq0

Obama is hardly the first member of his administration to engage in gun fun. Vice President Joe Biden, for example, recently wielded a military-style assault weapon in a crowd of children. 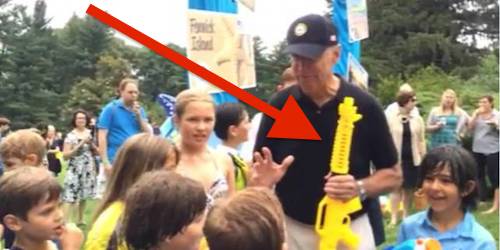