After a man broke into a Jewish temple in Brooklyn and left vandalism reading "Die Jew Rats" and "Jew Better Be Ready" and set fire to five other Jewish institutions, the New York Times knew who the real victim was: "Man Accused of Anti-Semitic Vandalism Faces New Setback in a Life Full of Them."

Yes, that was the real headline in Sunday's print edition of the Times. Gosh, don't your heart bleed for him?

James Polite was arrested late Friday after being caught on camera leaving the synagogue where he left the anti-Semitic messages, including "Hitler" and "End It Now." He was caught at the scene of nearby Yeshiva Beth Hillel, where he had set fire to the coatroom. It didn't take long for people to realize he was the same James Polite who once received a sympathetic profile from no less than the Times itself, detailing how he had overcome struggles with mental illness and drugs with the help of prominent Democratic politicians.

"In 2008, at a gay pride rally for Mr. Obama, Mr. Polite met Christine C. Quinn, then the City Council speaker…" the paper wrote at the time. "He interned with Ms. Quinn, a Manhattan Democrat, for several years, working on initiatives to combat hate crime, sexual assault and domestic violence. He also took part in her re-election campaign in 2009 and returned to help with her unsuccessful bid for mayor in 2013."

A year later, the Times is still quoting the lamentations of those who knew him. "This is a young man I have worked with for over a decade," Quinn told them. "With all the setbacks, you hoped this would be a good turn. But the opposite happened."

"People have a right to feel like they can worship and be safe, not fearful," the Times also quotes one of Polite's former employers as saying. "But I also know this man is very troubled."

It's sad, yes, that a once-promising young man succumbed to his demons and turned to crime and hate. But that's true of many criminals. There are countless perpetrators of hate crimes and violence with troubled pasts and lifetime full of "setbacks." Media coverage tends to focus on the "setbacks" of the victims, in this case the Jews whose property he destroyed and the hundreds of Jews he personally threatened a week after the worst anti-Semitic attack in the country's history.

It's difficult not to see the sympathetic profile as a direct result of Polite's intimacy with both the Times and New York's elite. When your run-of-the-mill bigot terrorizes a vulnerable minority, the focus remains firmly on the victims. But this time the perpetrator was well known in polite society (forgive the pun) and the story became about the individuals shocked by their friend's actions. Polite was afforded a level of empathy that would never, ever be afforded to a random mentally ill perpetrator who didn't have the luck to bump into a powerful patron a decade ago.

There's a bit of a media bias angle here, too. Suppose for a second that a man with a troubled history of drugs and mental illness found inspiration in his teens working on GOP campaigns and for conservative causes. Suppose that it wasn't the Times giving him glowing profiles before the crime spree, but, say, the Washington Free Beacon. Suppose then that he went on a crime spree targeting a vulnerable minority, a week after a horrific racist mass murder.

Does anyone believe the Times' takeaway would be "golly gee, and he was such a great kid"? Or do you think there would have been a laser focus on those who previously embraced him, complete with suggestions that his actions reflected on the larger conservative movement and barely disguised insinuations that Republican rhetoric instigated the attack? His relationship with powerful GOP politicians wouldn't be presented as a testament to their charity, but as an embarrassment and a stain.

But divorced from politics, the sympathetic tone was distressing to see after an excellent Times piece last week detailing the often-ignored extent of anti-Semitic hate crimes in New York. "Contrary to what are surely the prevailing assumptions, anti-Semitic incidents have constituted half of all hate crimes in New York this year, according to the Police Department," the Times reported. "To put that figure in context, there have been four times as many crimes motivated by bias against Jews—142 in all—as there have against blacks. Hate crimes against Jews have outnumbered hate crimes targeted at transgender people by a factor of 20."

And yet, I can't help but to feel that a hate crime spree against transgender or black New Yorkers wouldn't have ended with a concerned piece about the perpetrator. My hope is Polite receives the mental help he obviously needs. But I'd prefer if the media focus remains on the human beings he threatened to murder. 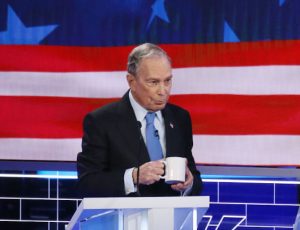