The most admirable thing about Joan Rivers, to my mind, was her uncompromising refusal to kowtow to the mob. She aimed both barrels at all comers and let everyone have it equally. She joked about the Holocaust and about celebrity culture and about her own addiction to plastic surgery and if you didn't like it, well, tough. She wasn't going to say what you want to make you happy, to make you like her. Like the good folks at South Park, she understood that once one special interest group clawed an apology out of you you were only opening yourself up to every other special interest group that wanted their pound of flesh.

That simple fact—her no-holds-barred, zero-f—ks-given attitude—makes all the handwringing about her legacy all the more delightful. Stacia Brown writes that Rivers has a "muddled legacy" because she was a joketeller and sometimes people didn't like those jokes. Variety wrote that there was a "final controversy" over her remarkably uncontroversial position regarding casualties in wars started by "states" run by terror orgs. That Variety piece was published the same day Freddie de Boer was wondering in this remarkably silly* piece why no one was discussing Rivers' take on Hamas' foolishness. I like to imagine Rivers watching all this go down with a devilish smile on her face.

She lived a life free of regrets. She never would have done something like this. She would've laughed in your face if you had demanded it of her. Comedian Anthony Jeselnik said it best:

Joan Rivers once told me she would die before she'd ever apologize for a joke. I'm glad she made it.

So write all you want about her mixed legacy, the special interest groups she has offended, the callous way her spiked tongue operated. Caterwaul about her lack of sensitivity and her refusal to apologize. But as you do all that, just remember: she beat you.

*Freddie is, of course, free to ride his hobby horses, and one of those hobby horses is to yell "Guys, you're being really mean about that ‘nation' of people that elected a genocidal terror org to represent them!" But if one were to construct an obit of Joan Rivers focusing on all the groups she offended, it would be approximately 17,921 words long and her eminently reasonable point about the Palestinians would probably appear somewhere at the end, just after her hatred for the Kardashian Klan was recounted. The idea that she was especially "racist" against Palestinians (who, it should be noted, are a nationality and not a race) and therefore should be called out for that at the top of her obits is laughable, man. HA. 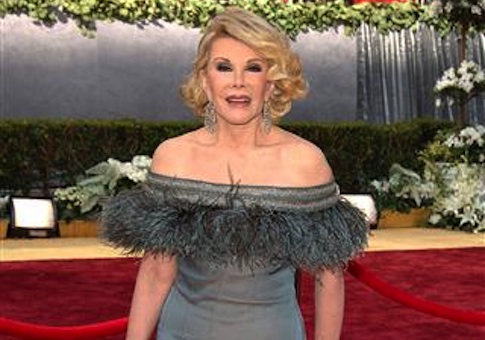 Remembering Joan Rivers’ Strong Support for Israel: ‘You Cannot Throw Rockets and Expect People not to Defend Themselves’