BREAKING: Journalists have given themselves another award!

Shortly before the most objectively influential and inspiring person on the planet, President Donald Trump, owned lib leaders Nancy Pelosi and Chuck Schumer in an Oval Office debate smackdown, TIME Magazine announced its choice for 2018 "Person of the Year." And the winner is: "The Guardians and the War on Truth."

Specifically, the title belongs to journalists who have been killed or imprisoned in recent years, because awarding this honor to journalists writ large would have been a tad pretentious, even for journalists. The implication was not lost on the true heroes: American reporters who cover the Trump administration.

These are not 'enemies of the people.' Nor am I or my colleagues. https://t.co/MHbAGtGOou

CNN Chief White House Correspondent Jim Acosta, for example, described feeling "truly humbled to have received such a high honor" from his peers, according to diary excerpts* reviewed by the Washington Free Beacon, and republished here for your immediate edification:

It's me, CNN Chief White House Correspondent Jim Acosta. I know I've told you this before, but people still give me funny looks when I refer to myself by my full job description while interrogating them at social gatherings. Most people already know my face from TV, and are usually big fans of the panache with which I wage the War on Truth every day, and the fearlessness of my questions in front of the camera. I just don't think they realize the slippery slope we as a society would face if we start referring to Journalists by their names alone. Words, titles, have meaning. You of all people should know that, Diary, and I'm grateful that you've always believed in me. I know we disagree about whether my "unctuous self regard" (your words) is hindering my bid for a primetime hosting gig, but we can save that argument for another day.

I'm writing because I wanted to be the first to tell you the good news: I'm getting an award! TIME Magazine just announced their 2018 "Person of the Year." It's Journalists! "The Guardians" who fight the "War on Truth." They even used my catchphrase! I knew I wasn't very likely to win the title outright, so I'm only a little disappointed that I have to share. Let me tell you, Diary, I am truly humbled to have received such a high honor from my peers. Like I said before, I get compliments all the time from average citizens — Truth Civilians, if you will — but I expect them to be impressed by my exploits. I wield the mic so they don't have to, and hopefully they never will. It feels a lot better coming from my fellow warriors who risk life and limb to defend the First Amendment. I wonder what they wrote about me?

Apparently I'm not going to appear on the cover this time, and that's fine. They've decided to highlight some of the other Journalists who have suffered under oppressive regimes — Jamal Khashoggi, for example. We both had our press passes taken away by our home governments for asking tough questions. We were both considered "enemies of the people." The Saudis even barred him from making public appearances, much like when the Trump administration threatened to take the cameras out of the White House briefing room. Khashoggi fled to America, while I stood tall and led the fight to keep the cameras rolling. Those are the facts. I sued my own government and won. What did he do? Still, I guess I can't really complain that he gets the cover and I don't. After all, my face is seen by millions around the world on a daily basis, and his will never be seen again by anyone. Perhaps Trump, for all his flaws, had a point regarding the acclaim bestowed on captured war heroes.

If anyone calls or stops me in the street to offer congrats, I'll just say what I always say: "Just doing my job." It projects humility, but also makes that other person think about how meaningless their own job is compared to mine — chief White House corespondent for CNN. It's called "negging," and it's... I mean, seriously, it's called "Person of the Year," not "People of the Year." Why couldn't they have picked one LIVING individual who most clearly embodies the tenacious spirit of Journalism under pressure? Why not a more handsome and recognizable face, if they're interested in actually selling some magazines?

Oh, sweet Diary, am I not tenacious, handsome, recognizable? A man of less humility would hesitate to ask the question, rhetorical as it may be. I'm just doing my job, as always. And I shall not be abridged. 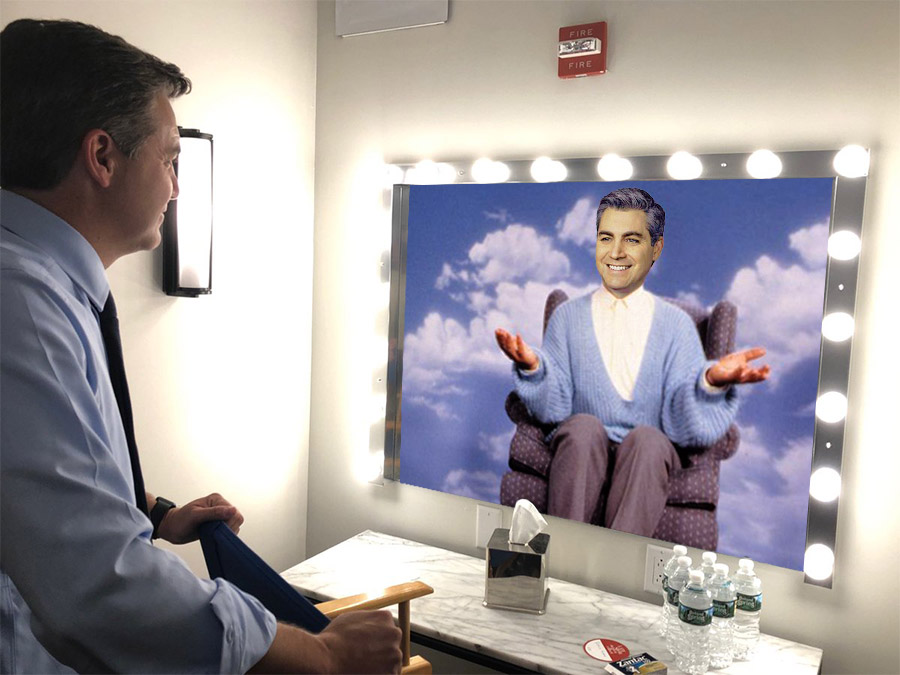 *Gullible readers: See tags at bottom of this post!