Why does Hillary Clinton hate America? That is the question that should be on everyone's mind as she embarks on a worldwide tour to plug her forthcoming memoir. Check out this THE POLITICO article [emphasis mine]:

Hillary Clinton discussed her work at the State Department, called for young women not to take criticisms personally and rapped the media for treating powerful women with a double standard at the kickoff of "Women in the World" in New York City Thursday night.

Clinton’s appearance on a panel with International Monetary Fund Managing Director Christine Lagarde, moderated by New York Times columnist Tom Friedman, ran the gamut from their opinion on the situation in Ukraine to a high-five between the two women when Friedman suggested toward the end that both women could end up in presidencies — Lagarde of the European Commission, and Clinton of the United States. …

High-fiving a French? That's not very American. But it gets even worse:

But Clinton, who seemed at-ease during the nearly 45-minute conversation at the David H. Koch Theater at Lincoln Center, joked that people can "read all about [her record]" in her book. 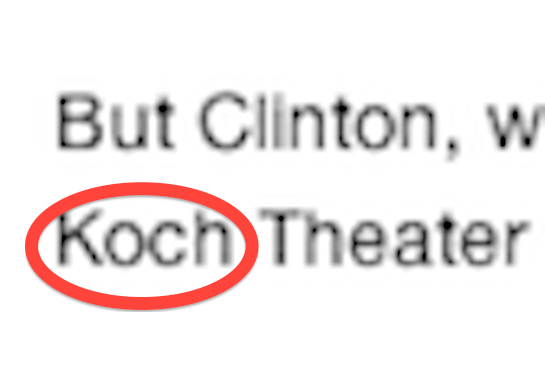 There must be some mistake. What does the theater’s website have to say about this? [Emphasis mine.]

In July 2008, philanthropist David H. Koch pledged to provide $100 million over the next 10 years for the purpose of renovating the theater and providing for an operating and maintenance endowment. It was renamed the David H. Koch Theater at the New York City Ballet Winter gala, Tuesday, November 25, of that year.

What a jerk. Next thing you know David Koch will be donating millions of dollars to hospitals. It’s important to remember that this is a man the Senate majority leader of United States has denounced as "un-American." And Harry Reid does not have a reputation for making reckless accusations. He said this on the Senate floor, so there must be something to it. Where there’s smoke, there’s fire, etc., etc. Tom Steyer, a concerned citizen who happens to be rich, thinks David Koch will go down in history as "just an evil – just a famously evil – person!"

Why is Hillary Clinton abetting David Koch’s un-American campaign to buy our democracy? That's the $100 million question. One anonymous source who was alive during the Bill Clinton administration told the Washington Free Beacon that in light of these revelations, she was "definitely not ready for Hillary." 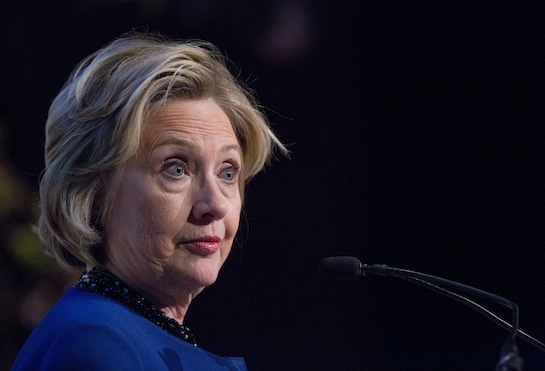 What else is she hiding? (AP)