When it was announced that South African comedian Trevor Noah was taking over for Jon Stewart at the Daily Show, we had good reason to celebrate. Sure, it would’ve been nice to break the glass ceiling—what, a woman can’t host a late night show? smdh at that—but at least it wasn’t another pasty white guy.

Salon noted that this would drive conservatives crazy! 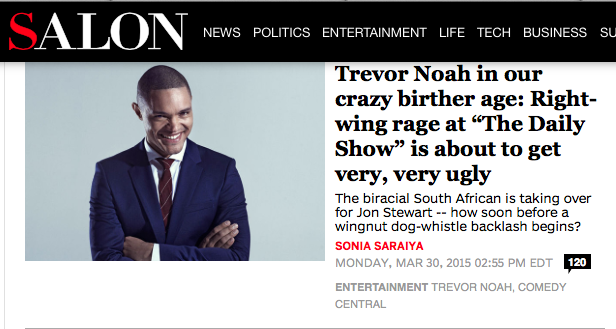 And Salon, as usual, was right. Though the reason they went nuts is a bit surprising. Turns out, Noah has made a lot of questionable jokes about Jews.

Now, obviously, this isn’t the biggest thing in the world: after all, Israel is an apartheid state so making fun of the Jews can be acceptable. And, let’s be honest, the right was just engaging in some concern trolling here. (Don't feed them!)

More troubling, though, was some of the other activity uncovered on his Twitter feed last night. Why, for instance, would Noah retweet this?

Noah’s disdain for those who accept themselves despite their refusal to conform to culture’s sick demands for women’s bodies is also quite problematic:

I wonder if he understands the body image problems that so many of our younger generation deals with. Does he even care? I’m with this "writer, editor, and feminist activist" at MicNews: Noah’s hateful "shtick" is very disappointing. 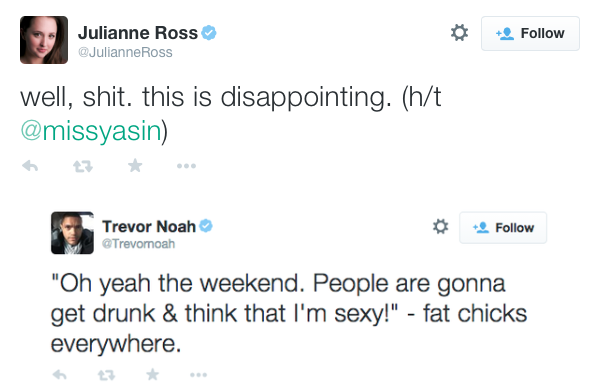 Things might get worse for Noah before they get better:

Some of the tweets, which Fairfax Media has chosen not to re-publish, appear to encourage domestic violence, female subjugation and anti-semitic sexual slander.

Of course, we must recognize that criticizing Noah is, itself, an extremely problematic endeavor:

That is interesting, isn't it?

We all know that negotiating the pyramid of grievances is a tricky endeavor. But intersectionality demands that we not give a pass to someone who fails to act as an ally to other marginalized groups.

I give the transgression of making crude jokes three problematics.

However! I also give the transgression of singling out Trevor Noah for criticism three problematics.