This here blog has had its fair share of fun marveling at the spectacle that is Beyoncé Knowles-Carter. Only Beyoncé is self-serious enough to believe raffling off face time with her mother is worth something of value. Only she is so disciplined that she can make hecklers dissipate into thin air and continue the next verse of her song.

So it’s comforting to see that Beyoncé can sustain the same level of grandiosity when she congratulates a close friend and fellow mother.

For Beyoncé, a simple Tweet and text message isn't enough. She needs to blow up her website with a black and white splash page of Yeezus and the Lion of the Kardashian Chimera. 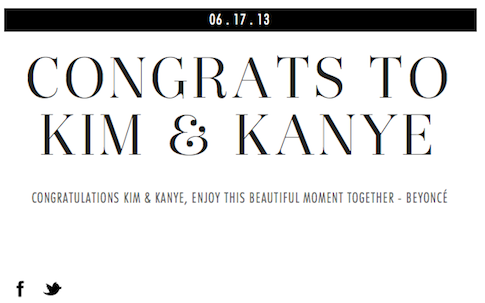 Beyonce: One for the small gestures

But to think, it was only in 2011 when Kayne and Jay-Z dropped "New Day," a spoken letter to their future sons. And because the universe has a extremely healthy sense of humor, the architects of "Hell of a Life" and "Girls, Girls, Girls" were blessed with daughters. Kanye and the Lion are taking the same approach with marketing "Yeezus" by not releasing album artwork and a baby photo. Kris Jenner must be still negotiating naming rights and photo royalties.