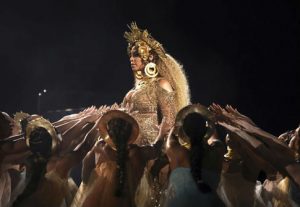 Beyoncé sang at the 59th annual Grammy Awards on Sunday night, but for some it was so much more than a performance. 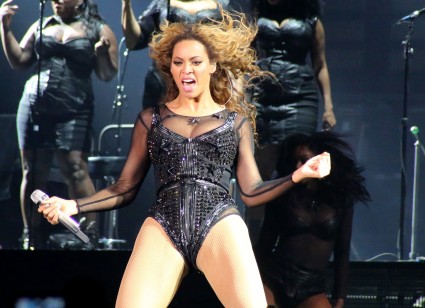 What is it about “Irreplaceable” that makes Beyoncé so surly? Bey’s world tour has finally made it stateside after follies overseas. During her Atlanta show, when she went down the front row, passing the mic to fans to sing along, she ran into a fan recording the show. Not to be crossed, Bey got up in the face of the fan who, after the concert, was to upload the video to YouTube, in all of its shaky and inaudible glory.

This here blog has had its fair share of fun marveling at the spectacle that is Beyoncé Knowles-Carter. Only Beyoncé is self-serious enough to believe raffling off face time with her mother is worth something of value. Only she is so disciplined that she can make hecklers dissipate into thin air and continue the next verse of her song. So it’s comforting to see that Beyoncé can sustain the same level of grandiosity when she congratulates a close friend and fellow mother. For Beyoncé, a simple Tweet and text message isn't enough. She needs to blow up her website with a black and white splash page of Yeezus and the Lion of the Kardashian Chimera. 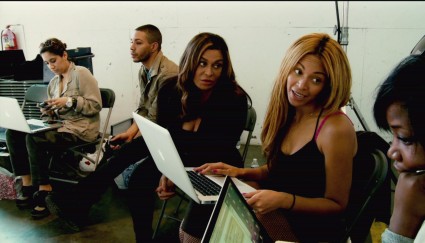 Celeb auctions typically earn donors lavish gifts or once in a lifetime opportunities. Beyoncé's charity stunt has her raising $25,000 for the unforgettable experience of being apart of her style team. If even Beyoncé herself believes she’s “more powerful than my mind can even digest and understand,” then you can expect she’s going to put peon donors to work helping her chew.

On some days, when I stare wistfully at the live stream of the White House exterior, I wonder if President Obama, out of all of the people on the planet, wishes he could trade places with Beyoncé. Leaving aside the whole “being married to his favorite rapper” thing, O must envy Bey’s vise-like-control over her own narrative, despite the fact that this year it's been trying its hardest to squirrel away from her. Monday’s “dap on the donk,” for example, is the latest in a string of shenanigans that have befelled the international superstar. In the midst of crooning her anti-men anthem, “Irreplaceable,” a fan who was either hammered or off his medication gave it up for Bey with a hearty pat on her "back." 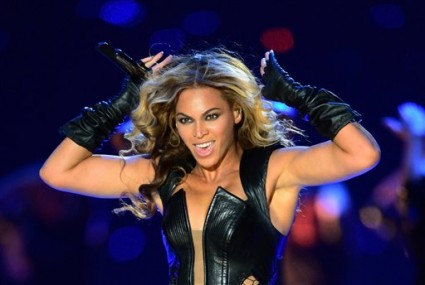 President Obama could learn a thing or two from his friend Beyoncé. While the Beltway is circling around the White House’s bungled responses to multiple scandals, Beyoncé is embroiled in a controversy of her own. Rumors are swirling that the pop mogul is touring Europe on her Mrs. Carter Tour pregnant with her second child with Jay-Z.  The theory was bolstered when last night on doctor’s orders Bey canceled her first ever concert. Unlike the Obama White House, which has been on roller skates during the IRS/DOJ/Benghazi triple threat, Beyoncé promptly used her website to release a handwritten note: 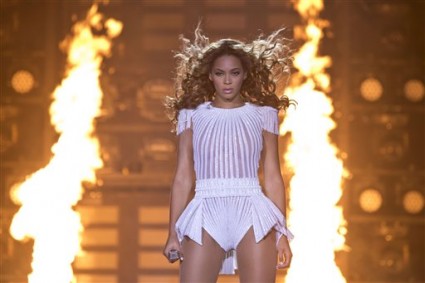 During a promotion interview for her latest world tour and animated film, ABC asked Beyoncé Knowles for her reaction to the fallout from the Carter Missile Crisis. 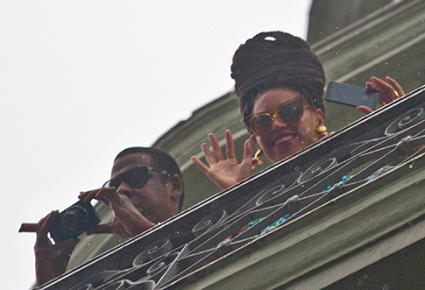 Rep. Debbie Wasserman Schultz said she was "uncomfortable with" and "concerned about" tourist trips to Cuba like the one the entertainer couple took to Cuba in a new interview with the Sun-Sentinel.
Previous Articles »