Against the Obama Administration’s Imperialist Meddling in Nigeria

How many American parents would proudly send their sons and daughters off to kill or be killed in Lagos or Chibok? How many young men and women aspire to be the first American to fall in Damaturu?

These towns are located in Nigeria. That’s in Africa. President Obama has not publicly discussed sending U.S. troops to Nigeria, but can we trust him?

As the pressure mounts from America’s media elites and hashtag aficionados, what will he do when strongly worded condemnations fail to persuade Boko Haram's elected leader Abubakar Shekau to release the hundreds of girls his group has (allegedly) enlisted in its quest for religious freedom?

We already know the answer: President Obama, who has previously engaged in dangerous rhetorical aggression by describing Boko Haram as a "terrorist organization," has decided to send a team of U.S. military officials to Nigeria to locate the girls. Now other world powers are getting involved.

Why? Well, for some reason, the imperialist elite has decided that war with Nigeria is a national priority:

Everyone says #whcd is useless but I think sudden wave of media on #BringBackOurGirls Mon was in part fueled by wknd conversations. (1/2)

The mix of advocates, Hollywood people w causes, media & policy-makers meant it was a topic that came up a bunch, at least in my exp. (2/2)

What justification does the United State have for meddling in Nigeria’s domestic affairs? Abubakar Shekau is no angel, to be clear, but he has the (sharia) law on his side. What gives our Secretary of State the right to convict, without trial, Boko Haram of committing an "unconscionable crime," when U.S. military aggression is to blame for some of the most unconscionable crimes in recent history?

Kidnapping of kids by #BokoHaram an unconscionable crime. US will support #Nigeria to #BringBackOurGirls & hold perpetrators accountable.

These events have followed a wearily familiar pattern, one we have already seen in south Asia and the Middle East, but that is increasingly being applied to Africa as well. Many have called for "action." These "terrorists" must be brought to "justice." The region must be "stabilized." Only the "enlightened" western nations—and their tanks, and their bombs, and their bombs, and their guns—can solve this conflict, we are told.

Consider the context. The United States and her western allies are already deeply embedded in Africa. Along the Somali coast, the U.S. Navy has been waging an illegal war against local sea merchants for years. In Libya, we have already suffered the predictable consequences of an unlawful intervention that directly led to the separatist uprising in Benghazi. Four Americans died.

Obama’s military forces operate a Predator drone base out of Niger, on Nigeria’s northern border. Boko Haram’s actions can be viewed as a natural response to this military encroachment. The U.S. government and news media’s demonization of Abubakar Shekau (who, again, is no saint) should not be allowed to overshadow the fact that America’s ruling class has needlessly provoked Boko Haram by waging a global war against Islam.

Did I mention that Nigeria has a lot of oil? It's all starting to make sense now, isn't it? Once again, the imperialists who dominate our political establishment are appealing to "women's rights," while hiding their true agenda: profits. Obama wisely decided to let the civil strife in Syria run its natural course, even though Syrian girls are routinely subjected to (alleged) forced labor and sexual exploitation.

Let us hope the president makes the right call by letting the democratically elected Nigerian government manage its domestic affairs. Because in case you hadn't noticed, the United States has plenty of important issues to confront at home, such as securing the safe return/exoneration of the exiled whistleblower and patriot Edward Snowden. It's time to bring our heroes home, not send them abroad to fight another oil war. 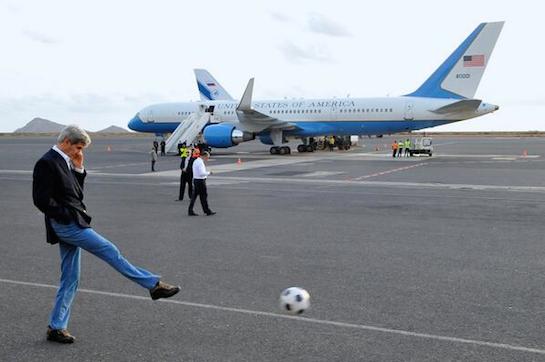 (Note: This post was inspired by Larry Danielson, Ron Paul and The Guardian)