Is America Really Producing More Oil Under Biden Than Trump? No, Obviously Not.

The White House and its allies are circulating a misleading talking point that the Biden administration is overseeing the most oil production in U.S. history.

Both White House chief of staff Ron Klain and President Joe Biden have used the talking point as a response to Republican criticism that Democrats are discouraging domestic energy production through regulation and not issuing new drilling permits. Earlier this month, Klain shared a chart on Twitter showing oil production under Biden—at an annual average of 11.18 million barrels a day—was higher than any of his five predecessors. In March, Biden said the United States was "approaching record levels of oil and natural gas production."

The claim from Democrats that domestic production is higher now than during the Trump administration is based on a comparison of four-year averages that includes the tremendous drop in economic activity at the start of the COVID-19 pandemic. Domestic oil production under Biden has yet to come close to the pre-pandemic levels reached under the prior administration, a more detailed Free Beacon analysis found. 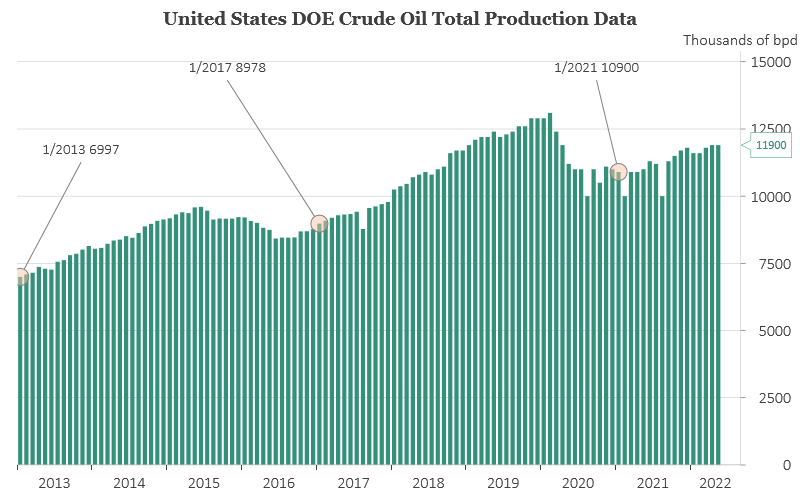 The Free Beacon analysis of domestic crude oil production data shows that prior to the COVID-19 pandemic, the United States produced just under 13 million barrels of oil per day at the end of 2019 and beginning of 2020. For comparison, that figure is more than 20 percent higher than the amount of oil the United States produced per day in September 2021. Energy industry expert James Wilson, who runs an oil and gas economics consulting firm, says the White House is abusing statistics to fit a narrative.

"You can claim anything with statistics," Wilson told the Washington Free Beacon. "When COVID hit, the price of oil dropped and then production dropped. Surprise, surprise."

The White House’s insistence on repeating the oil production claim bolsters the impression increasingly held by the public and some Democrats that the Biden administration is out of ideas to tackle rising prices. Even as the cost of gas skyrockets, the White House is sharing a months-old graph from liberal blogger Matthew Yglesias, a symptom of an office "defined by insularity," as Politico has described it.

Lots of assertions on this website about why gasoline production is not keeping up with demand, but here’s a fact about US oil output: pic.twitter.com/VP0Rf95eP8

Domestic oil production trends prior to the pandemic show how misleading these sorts of claims are. For example, the United States produced an average of a million barrels more per day between the start of 2019 to April 2020 than the 11.185 million barrels a day averaged under Biden.

Biden told a group of labor union leaders on Tuesday that "I'm doing everything in my power to blunt Putin's gas price hike" and blamed rising prices on "nothing else but that." Despite that claim, federal data show that average daily domestic oil production in March, after Russia's invasion of Ukraine, was lower than in November of last year.

Unlike during Trump’s final year in office, consumer demand for energy is elevated today. Total U.S. petroleum consumption is estimated to rise 730,000 barrels per day this year over last, according to the U.S. Energy Information Administration.

Some industry analysts point to macroeconomic trends out of the Biden administration’s control, such as oil companies’ reluctance to invest in new drilling sites because of shareholder pressure, as reasons for lower domestic production. That explanation, Wilson says, does not tell the full story.

"Another thing that’s inhibiting these guys from drilling is uncertainty about what this administration was and is going to do," Wilson said, referring to new and potential future regulations against the oil and gas industry. "The bottom line is that when Trump was president, these companies started producing and oil was cheaper."

Earlier this month gas prices hit an average of $5 a gallon nationwide. Industry analysts expect that price to only increase throughout the summer when more Americans travel for vacation.

The rising price of gas and household goods is the driving force behind Biden’s plummeting approval rating. A majority of voters say the economy is their top concern in multiple surveys, and a RealClearPolitics aggregate of recent polls shows Americans' approval of Biden’s job performance is lower than at any time since he entered office.