The Texas sheriff nominated to lead Immigration and Customs Enforcement pushed a false claim that a white man murdered a seven-year-old black girl from Houston, even after receiving a tip that the actual killers were black.

Ed Gonzalez, the Harris County sheriff and the Biden administration's choice for ICE director, worked closely with Black Lives Matter activist Shaun King to identify Jazmine Barnes's killer. Gonzalez amplified the family's claim that the gunman was white even after he received a tip that Barnes's killers were black. An attorney for the man King falsely identified as the shooter said King's allegation might have contributed to his client's suicide.

Gonzalez is likely to face scrutiny from Republicans for scaling back cooperation with the federal government on deportations early in the Trump administration. This year, he proposed releasing 1,500 county jail inmates, hundreds of whom faced charges for violent crimes. King is a controversial figure who has come under fire for making false allegations in racially charged incidents.

Jazmine Barnes was gunned down in the back seat of her mother's car on Dec. 30, 2018. On the day of the shooting, Gonzalez said on Twitter that Barnes's family described the gunman as a white male in his 40s. He released a police sketch of a suspect matching that description on Jan. 3, 2019.

A timeline of the investigation shows that King received a tip that Barnes's killers were black later that day. King said that he shared the tip "immediately" with Gonzalez but that they "could not just make sense of it." But Gonzalez, who has been sheriff of Harris County since 2017, told a reporter that King shared the tip that led to the arrest of the real killers, Eric Black, Jr., and Larry Woodruffe, with him "midweek." He continued circulating the incorrect police sketch on social media for two more days. 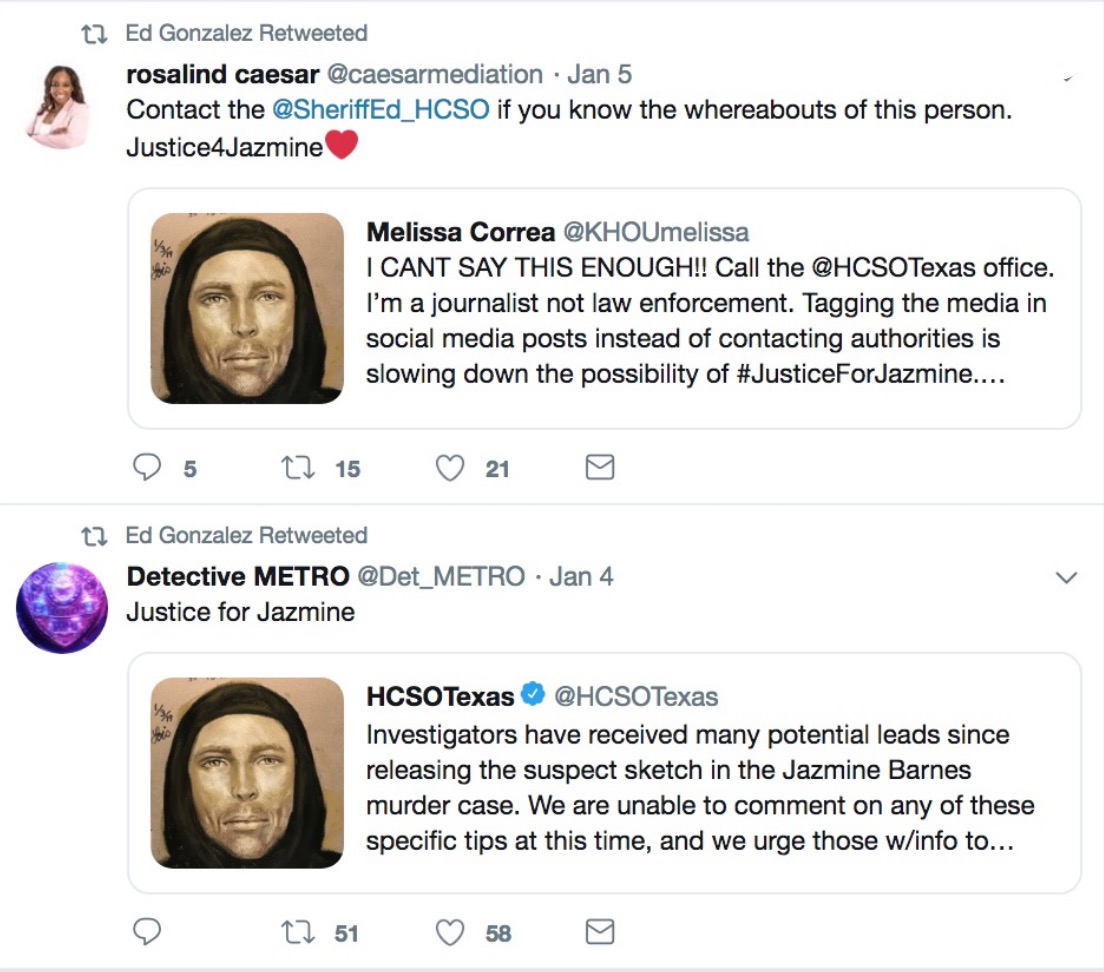 The Barnes murder became a national media sensation after Gonzalez, King, and others trumpeted the girl's mother's belief that the shooting was racially motivated. Attorney Lee Merritt, who represented Barnes's family, leveled a hate crime allegation during a Jan. 3, 2019, press conference he held with Gonzalez.

"We believe it was racially motivated in part because our nation at this moment is a highly racially charged society. We've seen a rise in hate crime," Merritt said.

Gonzalez stopped short of saying the shooting was a hate crime, though he said it could "potentially be race related."

Gonzalez later acknowledged that he received a tip that same day from King that Barnes's killers were Black and Woodruffe, both of whom are black.

Black and Woodruffe were arrested on Jan. 6, 2019, and charged with capital murder.

King pushed the false narrative of a white killer even after he acknowledged receiving a tip about Black and Woodruffe.

In a now-deleted Jan. 4 tweet, King falsely identified Robert Cantrell as a potential suspect in the shooting. He said that Cantrell had been arrested on unrelated charges hours after Barnes was killed. King posted a mug shot of Cantrell from that arrest and said the man was known to be "violent" and "racist." 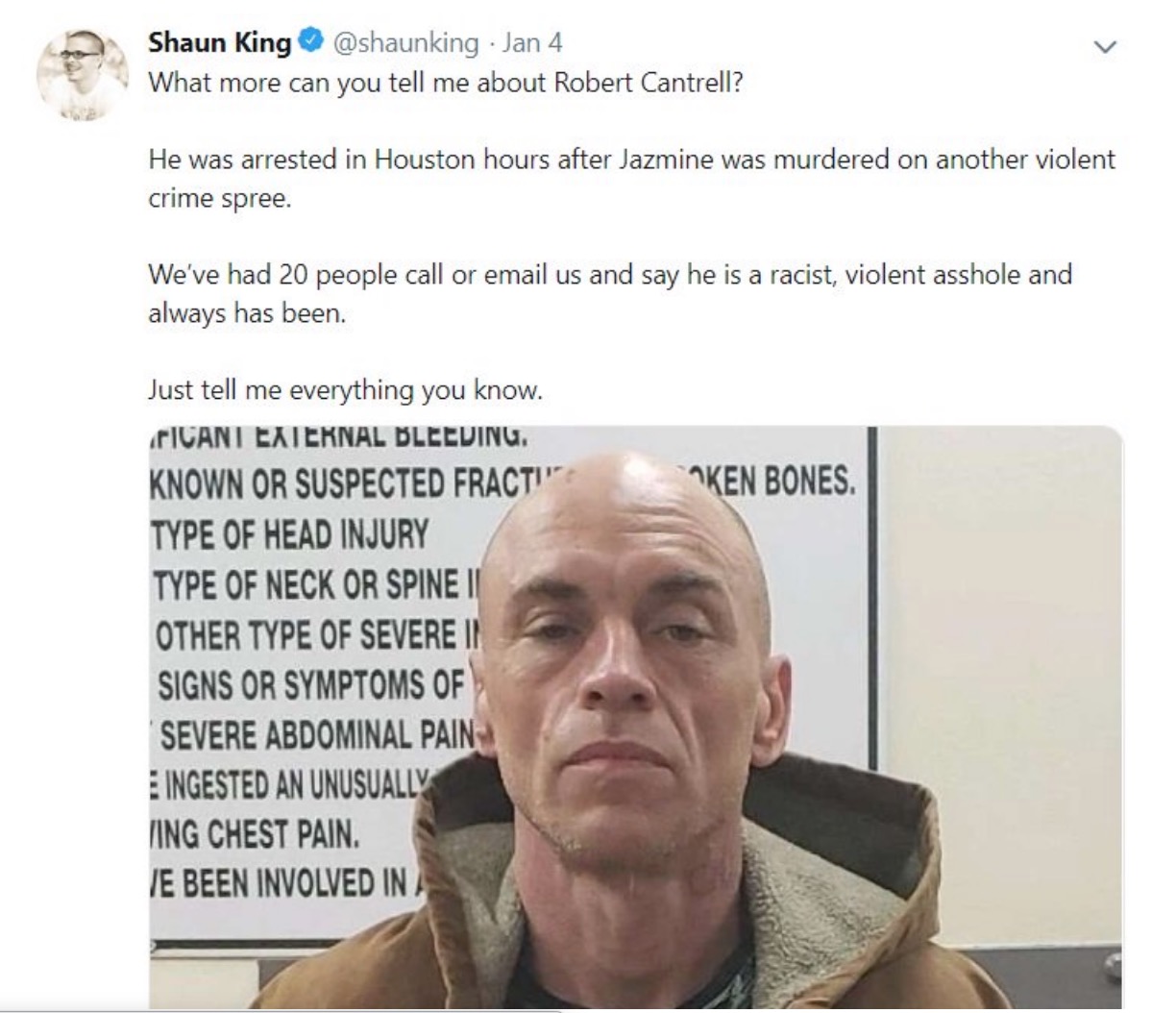 Cantrell started receiving death threats as soon as the police sketch was released, his attorney said. He hanged himself in July 2019 in a Houston-area jail where he was being held on theft charges. "I think that this significantly contributed to my client's diminished mental state knowing he was in jail and could not protect his family," said the attorney, E. Tay Bond.

Gonzalez spoke glowingly of King during a press conference on Jan. 6, 2019, even though the activist had misidentified Cantrell as the killer.

"I want to thank, again, Shaun King for his activism and help and raising awareness and the monies that were put forward," Gonzalez said.

Many of King's fellow activists have questioned his fundraising for social justice ventures. King has also made false allegations in other racially charged incidents. In May 2018, he publicly accused a Texas state trooper of sexually assaulting a black woman. Police video from the incident showed that the woman, Sherita Dixon-Cole, fabricated the story.

ICE did not respond to a request for comment. A spokesman for the Harris County sheriff's department defended Gonzalez's handling of the Barnes investigation.

"The suspect sketch was based on the surviving victims' descriptions," said spokesman Jason Spencer. "At the time, many observers were publicly sharing their belief that Jazmine's murder may have been a racially motivated hate crime. Sheriff Gonzalez never voiced such a theory. Instead, he took a very measured approach, insisting throughout the investigation that we did not know what might have motivated the person who took Jazmine’s life."

While the Barnes case was in the national spotlight at the time, it quickly faded from public view after her murderers were charged.

Black and Woodruffe were released on bail in 2019 while awaiting trial.