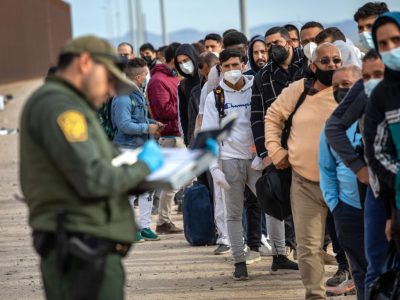 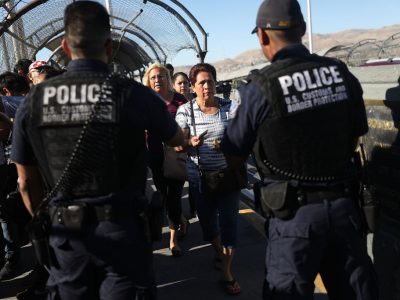 The Biden administration dramatically reduced migrant prosecutions by nearly 80 percent in the 2021 fiscal year, even as illegal crossings skyrocketed.

Just 2,896 migrants apprehended on the southwest border were transferred into U.S. Marshals Service custody in the 2021 fiscal year, according to an internal Department of Homeland Security memo obtained by the Washington Free Beacon. In the 2020 fiscal year, 13,213 migrants were transferred to federal authorities for prosecution.

The precipitous drop in migrant prosecutions illustrates President Joe Biden’s break from prior administrations’ policies toward illegal immigration. Refraining from bringing criminal charges against the vast majority of individuals entering the country illegally also provides evidence for critics who say the White House is exacerbating the migration crisis on the southern border.

The decline in prosecutions for illegal border crossings also happened amid the worst border crisis in U.S. history. Migrant encounters on the southern border exceeded two million in 2021.

"The lack of accountability from this administration encourages the worst people flooding our borders, criminals, to keep violating our laws until they finally commit a crime so egregious that the Department of Justice is forced to prosecute," a senior DHS official told the Free Beacon.

In the 2019 fiscal year, 20,604 migrants were transferred to Marshals Service custody for prosecution. The previous year, former president Donald Trump halted prosecutions of parents who crossed into the country illegally with children.

Defenders of the White House will likely say the drop in prosecutions can be almost entirely attributed to Title 42—a public health regulation that allows authorities to rapidly expel migrants who enter the country. With Title 42 in effect, law enforcement does not need to process migrants in a typical manner and instead works to expel them as quickly as possible.

But Trump instituted Title 42 in March 2020 at the beginning of the COVID-19 pandemic and still prosecuted far more migrants than in Biden’s first year of his presidency. Moreover, illegal border crossings in 2020 were much lower than in 2021, which saw the most migrant apprehensions in U.S. history.

Biden ordered an end to Title 42 in April, although legal challenges from Republicans have temporarily kept it in place. The Biden administration has not yet released border crossing prosecution data for the 2022 fiscal year.

Beyond attempting to eliminate Title 42, the Biden administration has worked to undo immigration policies from the Trump administration. Last month, the Supreme Court authorized Biden to terminate the "Remain in Mexico" policy, which forces many migrants to wait in Mexico before their asylum court hearing in the United States.

The Free Beacon in December reported on deportations plummeting to the lowest number in decades under Biden. The White House has also stonewalled congressional investigations into where DHS is placing illegal immigrants after they are released into the U.S. interior.