Bush bested Clay by a 3 point margin in a rematch of the 2018 primary. She received increased turnout and support during a moment of urban unrest over racial tensions. Leftist politicians and groups from Sen. Bernie Sanders (I., Vt.) and progressive House candidate Jamaal Bowman to the Democratic Socialists of America buoyed Bush’s campaign. Clay has held the seat since 2000.

Bush previously worked for Sanders's 2016 campaign, and her positions match those of her progressive peers. She supports a Green New Deal, abolishing ICE, and a universal basic income.

"Tonight, Missouri’s First District has decided that an incremental approach isn’t going to work any longer," Bush said Tuesday after her victory. "We decided that we the people have the answers, and we will lead from the front lines."

Bush, who gained momentum as protests against police violence swept the country, is no stranger to the Black Lives Matter movement. During the Ferguson protests after the killing of Michael Brown in 2014, Bush acted as a medic and community organizer.

"She’s being buoyed by this movement, and the movement’s origin is in Ferguson," Justice Democrats spokesman Waleed Shahid said.

"If you don’t know, now you know: The Squad is here to stay, and it’s growing," added Alexandra Rojas, executive director of Justice Democrats. 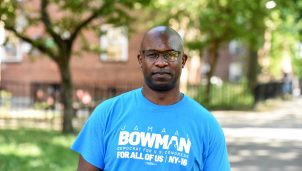