Rapper and 2020 independent presidential contender Kanye West on Wednesday presented over 57,000 signatures supporting his candidacy to the Arizona secretary of state in a bid to appear on the state's ballot in November.

West will file 57,892 signatures with Secretary of State Katie Hobbs on Wednesday, according to a letter from his campaign obtained by the Washington Free Beacon. That number is in excess of the 39,039 he needs to appear on the ballot, but represents only part of the more than 90,000 signatures that the campaign expects to file by Friday.

The filing, if successful, would put West in contention for another 11 electoral votes for him and his running mate, Wyoming-based pastor Michelle Tidball. Success is not guaranteed, however—the quixotic candidate has been denied access to the ballot in a number of states, and an Arizona resident has already sued to block West on the grounds that he is a registered Republican.

That challenge is just the latest legal offensive against West, with another, filed Tuesday, spearheaded by prominent Democratic lawyer Marc Elias. West's strong showing in Arizona—and the legal energy behind stopping it—suggests his campaign may be more impactful than many observers have assumed.

"39,039 signatures are needed to get Kanye on the ballot in Arizona; our partial turn-in today will show we collected nearly 58,000 signatures without breaking a sweat," Kanye campaign adviser Gregg Keller told the Free Beacon. "When our filing is completed it will show more than 90,000 Arizonans want Kanye West on the ballot."

West's campaign is filing 57,000 of its more than 90,000 signatures early, according to the letter, after "conversations" with the secretary of state's office in which it was agreed that the partial filing would "aid in processing" the large number of signatures. West's Wednesday filing includes nominating papers for himself, Tidball, and their 11 electors, as well as the signatures.

The large number of signatures reflects the fact that independent candidates in Arizona face a high barrier to entry. The 39,000 they need is more than five times the number required for Republican or Democratic candidates.

If West's petition is approved, Arizona will be added to the list of states on whose ballot he will appear, including expected swing states such as Minnesota and Iowa. West has been denied access to the ballot in a number of states, and his campaign has promised an aggressive legal campaign to overturn those denials, including filings already in West Virginia, Wisconsin, and Ohio.

The potential for West to disrupt the 2020 cycle appears to have made some Democratic operatives nervous. Two of West's electors in Virginia filed suit against him on Tuesday, alleging that they were deceived into signing on. Their legal counsel is Elias, who previously served as general counsel for Hillary Clinton's 2016 presidential campaign.

"National liberals and the media are awake now to the intense energy behind Kanye's candidacy," Keller said. "It terrifies them and they're working overtime to thwart the will of the people and to prevent a qualified Black man from having access to the ballot. It's shameful." 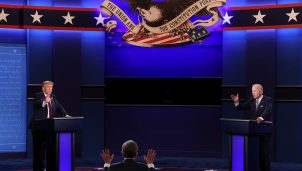 Who Wins an Unwatchable Debate?