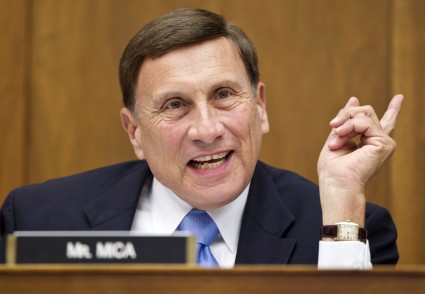 Former GSA administrator Martha Johnson said the Chevy Volt would save millions in a May 2011 speech on the government purchase of electric vehicles.

The Secret Service has terminated three agents in the wake of the Colombian prostitution scandal that has rocked the Obama administration—the second scandal to strike the federal government in as many weeks.

A clown and a mind reader sought to find work in the General Services Administration today, as the Congressional probe into the GSA’s $800,000 Las Vegas conference continued.

The General Services Administration official responsible for a 2010 conference that cost more than $800,000 also enjoyed expensive hotel suites on the taxpayer dime, according to pictures posted on the manager’s public Google Plus account.

The General Services Administration official responsible for the agency’s lavish 2010 conference at a Las Vegas resort received only “a slap on the wrist” after agency administrators became aware of the wasteful spending, according to an internal GSA email released by the House Committee on Oversight and Government Reform Friday.

Officials from the spendthrift General Services Administration turned a one-hour ribbon cutting ceremony in Hawaii into a weeklong, taxpayer-funded vacation, according to the Hill.
Previous Articles »