Hillary Clinton went all out for "Hot Girl Summer" in the Hamptons, where the failed politician was recently spotted roaming the shores with her disgraced husband and a trendy female bodyguard.

The former secretary of state donned a flattering yet sensible lewk that exuded the essence of Megan Thee Stallion's take on feminine confidence: "[It's] just basically about ... having a [good] time, hyping up your friends, doing you, not giving a damn about what nobody got to say about it."

Fashion experts told the Washington Free Beacon that Hillary's outfit, known in the couture industry as a "secular beach burqa," was an age-appropriate ensemble that sends a powerful message to younger generations: When it comes to summer clothing, sometimes more is more.

Hillary's long-sleeved top, for example, covered not only her arms and wrists, but also her fingers. The Taliban, who have been praised in the Daily Mail for their "stylish" outfits, would approve. Her baggy blue pants boasted large, deep pockets in addition to a drawstring for increased flexibility, and her "sun destroyer" hat and sunglasses were both practical—in terms of keeping out harmful UV rays—and inconspicuous, a perfect combination for the health conscious celeb who wants to maintain a low profile in public.

Bare feet are so 2019, which made Hillary's choice of hiking shoes both sensible and fashion forward. Her exposed neckline, meanwhile, showed off her playful and seductive side, a criminally underrated aspect of her public persona. She isn't afraid to flash some skin, but not too much—just enough to make us yearn for more.

Hillary really stole the show, our fashion experts argued, with her formidable accessories: a titular husband (and former president of the United States, no less), who judging by his facial expression would rather be anywhere else, and a young, racially ambiguous female bodyguard. Diversity and inclusion are very on-trend, obviously.

Hillary is the first woman in American history to lose a presidential election after being nominated by a major party, and the only politician to ever lose an election to Donald Trump. 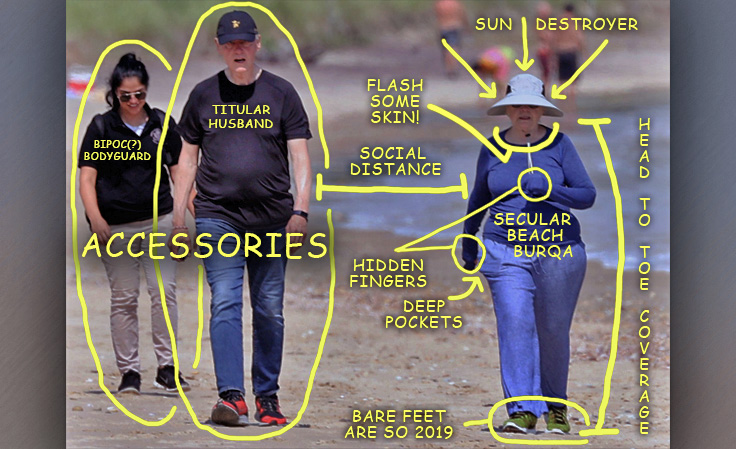