"I'm open to decriminalization. Sex workers, like all workers, deserve autonomy but they are particularly vulnerable to physical and financial abuse and hardship," Warren said in a statement to the Washington Post. "We need to make sure that we don't undermine legal protections for the most vulnerable, including the millions of individuals who are victims of human trafficking each year."

Warren previously voted for FOSTA, which bans websites used by sex workers to screen clients. In addition, she also introduced bipartisan legislation with Sen. Marco Rubio, R-Fla., that would pressure banks to shut down accounts suspected of engaging in trafficking, HuffPost reported.

"There should be no place in America for profiting off putting more people behind bars or in detention," she wrote in a post on Medium. "That’s why I will shut down the use of federal private detention facilities by ending all contracts that the Bureau of Prisons, ICE, and the U.S. Marshals Service have with private detention providers. And I will extend these bans to states and localities by conditioning their receipt of federal public safety funding on their use of public facilities."

Warren has enjoyed a small surge in polling in recent months, in part due to her laundry list of proposals that include tuition-free public college, universal child care, a $2 trillion investment in green energy, and canceling 95 percent of student-loan debt. 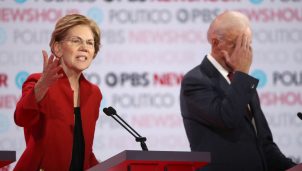 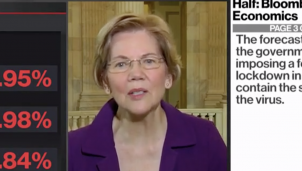