A student at the University of New Hampshire says that after he was recruited by Tom Steyer's NextGen Climate, he grew disillusioned with the group when he learned that it was more about politics than actually helping the environment.

Nicholas Lajoie, a freshman at the University of New Hampshire, approached Scott Brown supporters at a NextGen event holding a sign that said Steyer "can't buy our election."

"At first, I thought I was helping the environment," Lajoie told the Brown supporter holding the anti-Steyer sign.

Lajoie said in an interview with the Washington Free Beacon that this was not the case.

"NextGen wanted me to work for them," Lajoie said. "The sole reason I did was because I wanted to help the environment."

Lajoie said that the opportunity was initially presented to him as a "$15 an hour job to help the environment."

After he showed up, he learned that it was actually unpaid. He said it wasn't long before he started looking deeper into the backing of NextGen.

"After two meetings, I decided to do research on NextGen. When I realized it was just somebody with money trying to get power, I quit," Lajoie said.

Lajoie said that NextGen's work at the University of New Hampshire amounted to handing out paper flyers getting people to sign up and add their email addresses to a list. Lajoie doesn't think this did much to help the environment.

"If people write their email address on this list, it is not helping the environment," he said.

He added that the flyers ended up littered across campus, which he saw as hurtful to the environment.

Steyer's speaking event at the university was not well attended by students, much to the glee of the guys who showed up to protest the event. 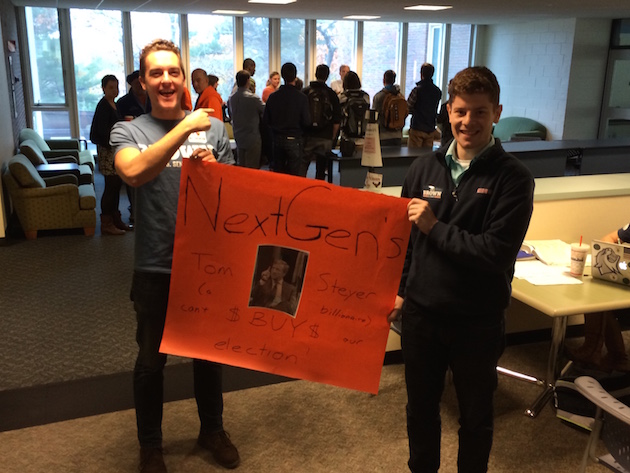